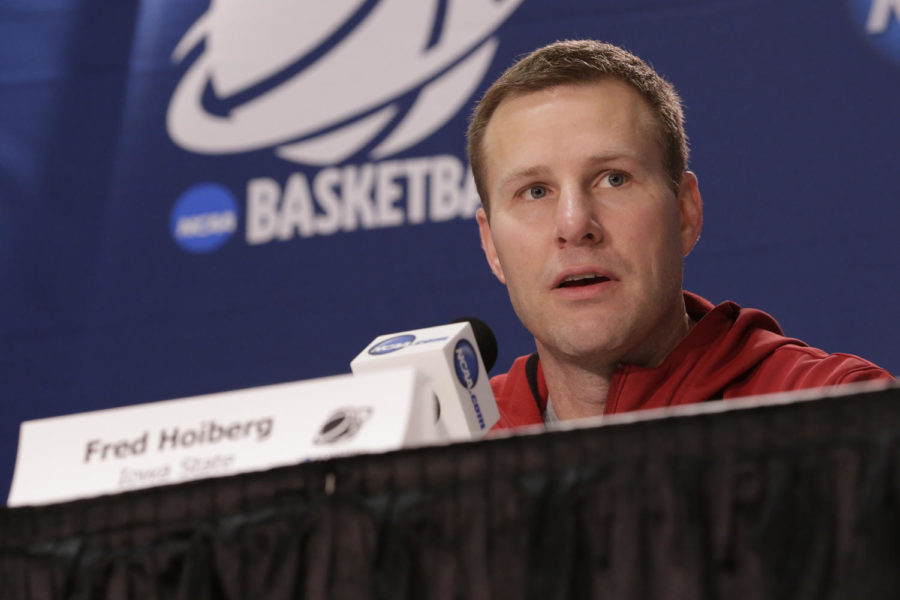 Not even 24 hours removed from a season-ending injury, Georges Niang — using his new crutches to hobble down to a chair and wearing a boot that encapsulated his broken right foot — smiled.

The player that spoke to the media before Iowa State’s closed practice March 22 was far away from the same player who had his run playing in the 2014 NCAA tournament cut short the night before.

This Niang was back to his old self, joking about getting pom-poms for the big game.

“This isn’t about me, I’m not this whole team,” Niang said. “Yeah I got injured; it’s unfortunate. We still have a great opportunity ahead of us, and I don’t want me being injured to ruin that.

“This isn’t about me, this is about our team.”

So in those few hours from injury and diagnosis to practice — what changed in the locker room? The same locker room that was quiet enough to hear a pin drop was full of chatter.

“Just Georges telling everybody that it’s OK and that he’s OK,” said DeAndre Kane. “That’s our brother. How he was feeling yesterday — that’s how everybody was feeling. He’s our leader, he was down so we were a little down. And today he’s up and he’s happy, so the team’s happy.”

Now Iowa State marches into March 23’s game against North Carolina (24-9, 13-5 ACC) for a shot at its first Sweet Sixteen berth since 2000 and has prepared to do so without its key facilitator on offense.

In his last five games, Niang has scored in bunches, averaging just more than 20 points and six rebounds per game, which are both above his season averages. This is including March 21’s 24 points with six rebounds and four assists that came with eight minutes still left in the game before Niang left with the broken foot.

“Georges does everything for this team, especially down on that offensive end,” said ISU coach Fred Hoiberg. “He’s so versatile, he’s so tough to prepare for. You can use him for so many different mismatch opportunities.”

Hoiberg said Iowa State is a confident bunch, pointing to stretches in the season where the team has played without Niang in the lineup for foul trouble and even when Iowa State was without Melvin Ejim early in the nonconference portion of the schedule.

The Tar Heels boast five players that are at least 6 feet 9 inches, which gave them a major advantage on the glass in their first game against Providence, out-rebounding them 40-26 while grabbing 21 offensive rebounds and scoring 26 second-chance points.

“They’re a bigger line and are athletic, but we’ve been facing bigger athletic lines all year,” Ejim said. “I’m not worried about it.”

With Iowa State trotting out Ejim and Dustin Hogue —who are both listed at 6 feet 6 inches — to anchor its front line, Naz Long, Kane and Niang all said they’d put the No. 2 and No. 3 rebounders in the Big 12 against anybody in the country.

“We’ve played teams that are long and athletic,” Long said, citing Baylor and Kansas. “Melvin and Dustin, I have all the confidence in the world that they’ll go in there and bang.”

And so the team which was not even 24 hours removed from losing its leader had a change of heart, each player saying another would be ready to step up against North Carolina on March 23 with a shot at the Sweet Sixteen on the line.

“It’s a confident group, even without Georges,” Hoiberg said. “If you believe in each other, if you believe in yourselves, it’s pretty powerful. You can go out and compete with a team like this that has all these McDonald’s All-Americans and all these great athletes.”