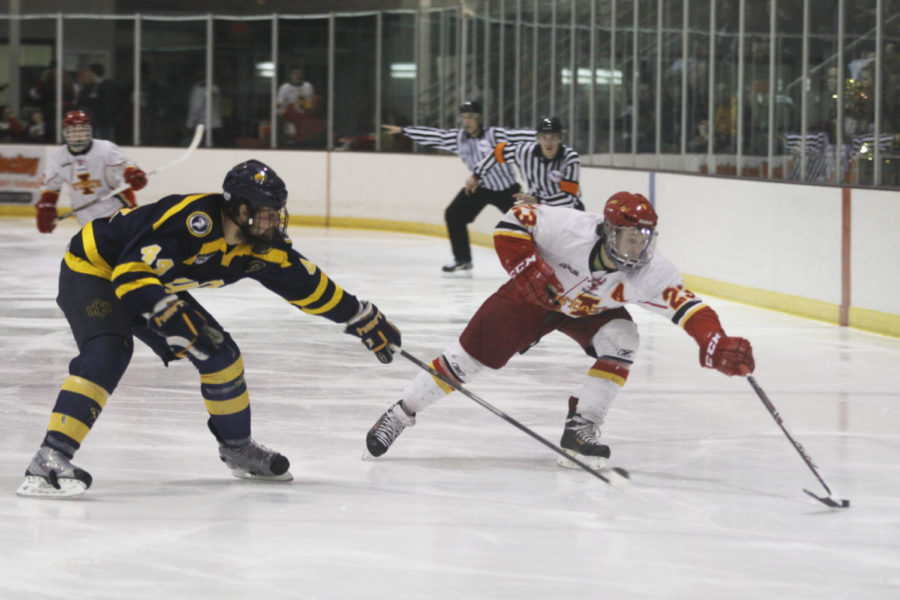 Junior forward Chris Cucullu fights for the puck during the game against University of Central Oklahoma on Feb. 15 at Ames/ISU Ice Arena. The Cyclones fell to the Bronchos 6-3 in their final game of the regular season.

Going into the American Collegiate Hockey Association Tournament last weekend, Ohio had beaten the Cyclone Hockey team in the last three postseason appearances. That was about to change.

The No. 10 Cyclones (34-9-4, 14-5-1 CSCHL) were set for a first round matchup against the No. 7 Bobcats (30-7-3, 14-4-1 CSCHL) at nationals on March 8. These two teams have clashed in the playoffs before, as Iowa State has fallen to Ohio in the past two Central State Collegiate Hockey League Tournaments and last year at the ACHA Tournament.

But after the final seconds clicked off the clock in the game between the two rivals, the Cyclones were up 3-1, breaking their three-game losing streak to the Bobcats in postseason hockey.

“It was a pretty good feeling to beat Ohio in a playoff setting like that after all the times they conquered us,” said ISU forward Mark Huber. “The key to it was: We did the little things right. We went out and played a very strong defense game and capitalized on their mistakes.”

The seniors on the team provide most of the offense in the win over Ohio, as all three of Iowa State’s goals came off a senior’s stick.  Out of the four seniors on the team—Jon Feavel, Chris Cucullu, Matt Bennett and Huber—only Huber wasn’t able to put the puck in the back of the net.

In past four years, Iowa State is 4-11 against the conference rival. However, this season the Cyclones went 3-3 when facing the Bobcats, with all but two games being decided by one goal or in overtime.

The fact the team was able put the Bobcats away easily in regulation came as a surprise for ISU goalie Matt Cooper.

“We were sitting in the locker room afterwards thinking this is kind of anticlimactic,” Cooper said. “But it was nice to go out there and pound them and get the win; it definitely was a good experience.”

With the win against Ohio, Iowa State advanced to face No. 2 Oklahoma (26-5-3) in the quarterfinals in the ACHA tournament on March 9. There, a three-goal third period by the Sooners ended the Cyclones’ season by beating them 3-1.

ISU coach Jason Fairman credits Iowa State’s elimination from nationals partly to the Sooners having an extra day of rest.

“I think that [not having to play on back-to-back days] was a huge advantage,” Fairman said. “I’m not saying I disagree with it. Those top teams earned the right based on the regular season to get that day off. But it is a huge advantage to not have to play when other teams played a game.”

Even though the Cyclones came up short and weren’t able to bring home a championship banner back to the Ames/ISU Ice Arena, Huber still believes the season was a success.

“It was disappointing to lose,” Huber said. “Now we just have to think back on the positives on the year. This squad has been through a lot with coaching changes and adjustments as a whole, so there is a ton of positives to take from the year. We made a lot of great memories and a lot of great wins.”