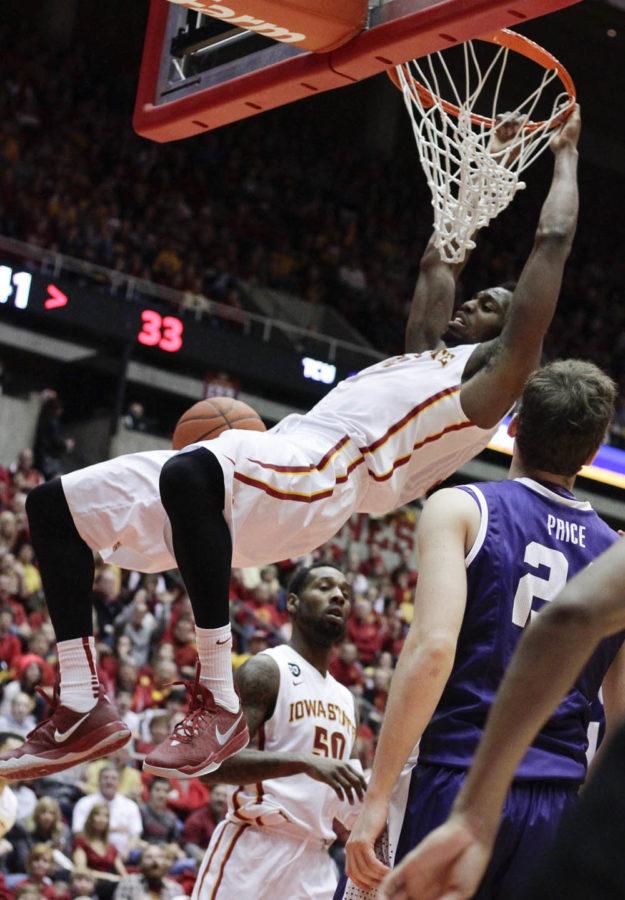 Senior forward Melvin Ejim dunks the ball versus TCU on Feb. 8 at Hilton Coliseum. The Cyclones beat the Horned frogs 84-69. Ejim set a Big-12 single game record with 48 points, and tied the NCAA Division 1 single-game mark for this season. In addition, he had a career-high 18 rebounds.

The honors for Melvin Ejim continued rolling in Tuesday, as he was named the USBWA National Player of the Week for his performances last week.

Ejim capped his two-game week Saturday with a 48-point performance in an ISU victory against TCU. The record-breaking game garnered national attention, and Ejim was named Big 12 Player of the Week on Monday before receiving the national award Tuesday.

Ejim’s 48 points broke a Big 12 record for points scored in a single game, knocking Kansas State’s Michael Beasley (2008) and Denis Clemente (2009), who both scored 44 points, to second all-time. He also broke the Big 12 record for field goals in a game with 20.

The career performance was efficient as Ejim went 20-of-24 from the field. He scored 33 of his 48 points in the second half and at one point scored 20 consecutive points for the Cyclones.

In the two games combined — the other a triple overtime victory against Oklahoma State — Ejim went 25-of-39 from the field with 70 points and 31 rebounds.

The senior forward is currently leading the Big 12 averaging 19.1 points per game and is third in rebounding with an average of 8.7 rebounds per contest.

Iowa State returns to the court at 12:45 p.m. Saturday at Hilton Coliseum when it takes on Texas Tech.