Putting it all together: Cyclones take home an 81-64 victory over the Longhorns 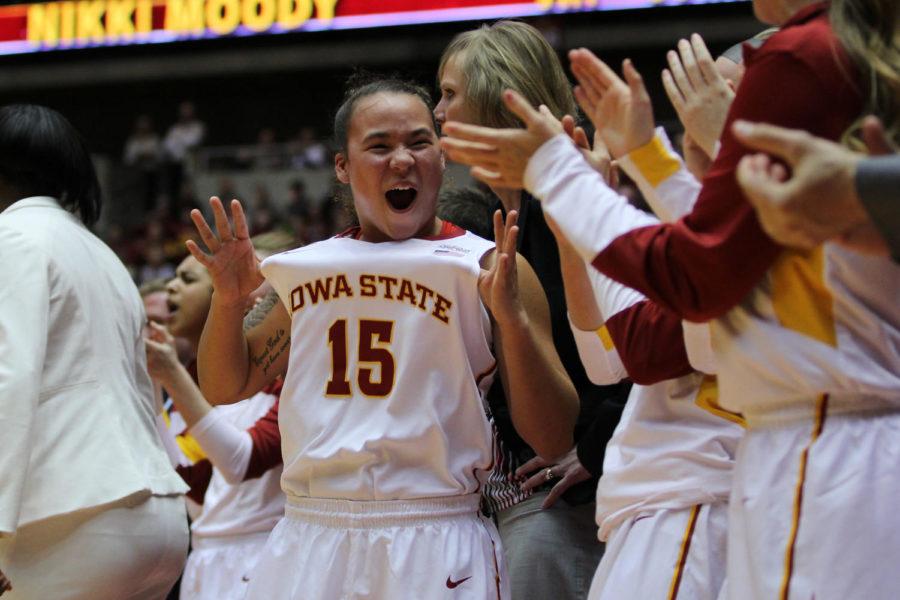 Sophomore guard Kidd Blaskowsky celebrates a score on the sidelines during the game against the Texas Longhorns at Hilton Coliseum Saturday, Feb. 22. After a slow start, the Cyclones offense picked up and went neck-and-neck with the Longhorns until they hit a 13-0 run to pick up the lead. Blaskowsky had 11 points for Iowa State. They took the win 81-64, putting Iowa at 18-8 and 7-8 in the Big 12.

With just over seven minutes remaining in its game Feb. 22, the ISU and Texas women’s basketball teams looked like two squads that would exchange buckets back-and-forth until the very last shot of the night.

The scored was tied for the seventh time in the game at 51-51 and neither team seemed to be able to pull away.

During the next three minutes, the ISU offense was clicking on all cylinders and went on a 13-0 run to hold off the Longhorns, capped off by stolen in-bounds pass by junior point guard Nikki Moody, with a bucket plus the foul by Texas.

“Those two to three minutes, we couldn’t have played any better,” said ISU coach Bill Fennelly. “We guarded them like crazy, the ball bounced our way a couple times, they missed some shots maybe they would make and we did everything tremendously efficiently for that time offensively.”

The 13-point lead proved to be too much for the Longhorns to handle as they never got it back to a single-digit game. Iowa State went on to win 81-64 in the largest margin of victory this season since beating Kansas State by 19 on Feb. 1.

Beyond the final score, the other statistic the team was quick to point out was the scoring distribution. The Cyclones had six players score in double-figures for the first time since 2009.

Although some of the scoring was inflated due to late fouling by Texas resulting in 30 made free throws, the widespread scoring was a welcome sight after only three players saw double digits in the previous two games.

“It was a team win,” Moody said. “Six people that played the game scored in double figures so that’s a great game for all of us and I think that’s just a confidence booster.”

After what the team felt was one of the best games of the season, Iowa State now sits in sixth place in the Big 12 with a 7-8 record. With only three regular season games remaining, the team hopes to gain some momentum heading into the Big 12 tournament.

Its next challenge against Oklahoma State may bring back bad memories, as the Cowgirls handed the Cyclones their first loss of the season at Hilton Coliseum in what was a top-15 matchup. The loss was the first of four straight that sent Iowa State tumbling down the Big 12 standings.

However, the win against Texas proved to Fennelly his team has not given up yet. The win came less than two weeks after falling to the Longhorns in Austin, Texas and the offensive attack was as potent as it’s been in Big 12 play this season.

With the majority of losses stemming from production problems from only a few players, the win against Texas showed the Cyclones might be finding the correct formula at the right time.

“Everyone found a way to help at a time when we needed it,” Fennelly said. “We beat a really good Texas team, a team that will be in the tournament. So I think when you put it all together, that was the best game we’ve played all year.”