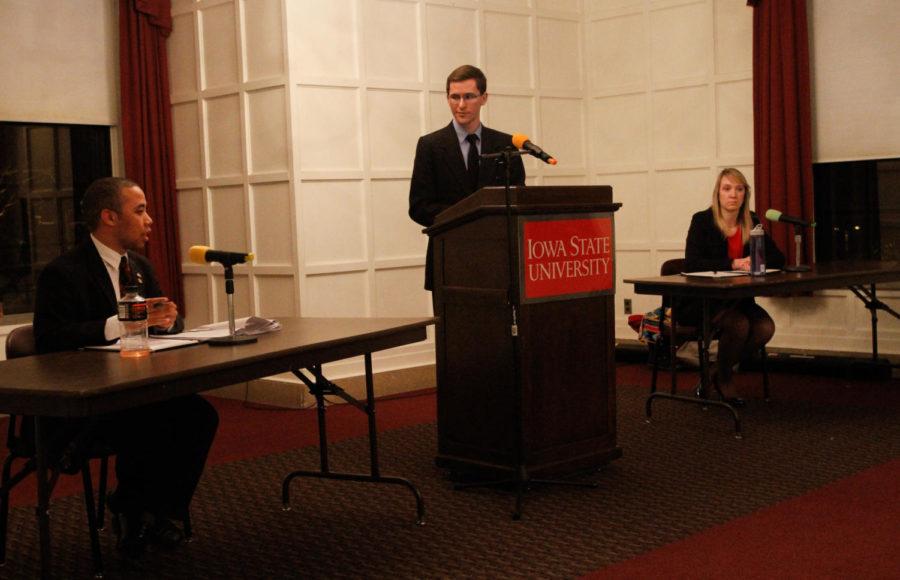 Government of the Student Body presidential candidates Khayree Fitten and Hillary Kletscher participate in the presidential debate on Feb. 28 in the Cardinal Room at the Memorial Union.

The two remaining candidates running for president for the Government of the Student Body met last evening to make their final platform points before the coming election next week.

The 2014 GSB presidential debate took place Feb. 27 in the Cardinal Room of the Memorial Union with both presidential candidates, Khayree Fitten and Hillary Kletscher, present to debate their platforms.

Jake Swanson, an election commission member, was the mediator for the event and asked a range of questions that centered around Iowa State, the candidates and student issues.

Each candidate had 90 seconds to respond to the questions asked. Three minutes were given for the opening and closing remarks.

Swanson asked the candidates how they plan to communicate with the university administrators.

“We have relationships already built where we can walk into some of their offices and they will cancel their meeting because they know we need to talk with them,” Kletscher said. “That takes trust.”

Fitten said that there has been a lot of drama within GSB, and he has turned to administrators that he counts as personal mentors.

“One specific mentor told me that one of the differences is personality in this campaign,” Fitten said. “It really highlights an option that students have.”

“The administrator said, ‘Khayree, when you go and talk to us, we know you are being straight with us, you’re going to be forward,’” Fitten said.

Swanson asked candidates what the biggest misconception students have about them during this election is and if they can debunk the misconception.

“They can get very personal,” Fitten said. “I am always straight forward and I think the misconception about that is that I am too cold.”

Fitten said that he is going to serve students best with a passion to get things done.

Swanson asked candidates about the many unfilled senator seats on this year’s election ballot.

“Speaking from personal senate experience, I can understand that,” Kletscher said. “When I first started on senate, I didn’t know what all the rules were.”

Kletscher said she is passionate about projects and students, so when meetings last eight hours, it is hard to tell people that it is worth it.

“I’m sorry that Vice President Kletscher doesn’t think that every meeting is worth it,” Fitten said. “I have not missed a senate meeting.”

Kletscher said that she does believe every minute they work for students matters.

“Instead of telling students what we do, Gabe [Walsh] and I would like to show students what we are doing,” Fitten said. “I think that is the main difference between our campaign and Kletscher’s.”

Kletscher said that it is important to remember that every person working in a student leadership role is still also a student as well.

“It is important that we maintain that life-work balance,” Kletscher said. “Meetings do go late, and that is okay.”

Voting for the 2014 GSB elections begins March 4 and ends March 5. Students may vote online at vote.iastate.edu.