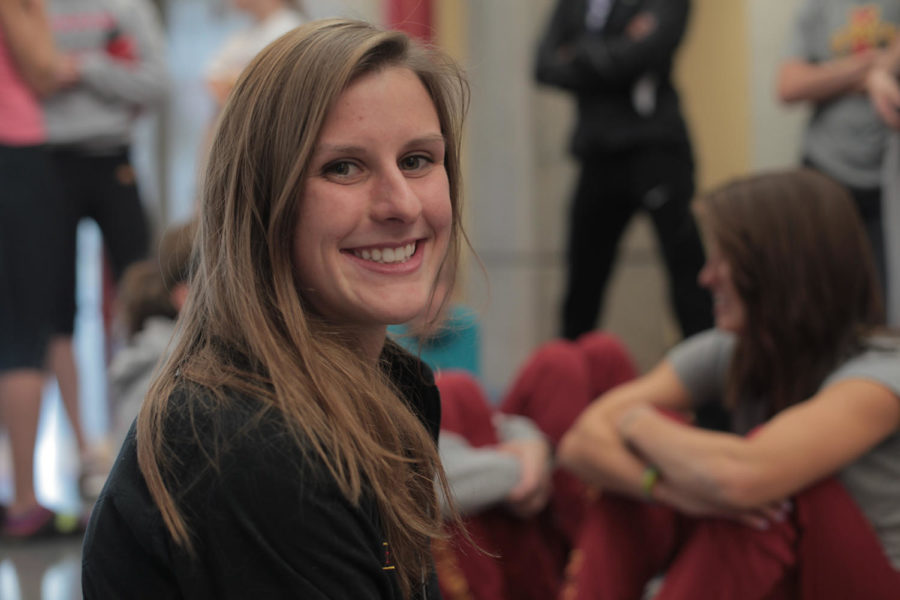 ISU sophomore Katy Moen was diagnosed with mononucleosis last year, which stopped her training for a while and now returned to practice with support from her coaches and teammates.

As a redshirt freshman, she was diagnosed with mononucleosis at the beginning of September and one day before the Drake Fall Classic just one season ago.  With the diagnosis, she knew the road ahead wouldn’t be easy.

“I was required to sit some time out until my blood levels indicated a healthy recovery,” Moen said. “For three weeks I didn’t run, bike, swim; I just enjoyed the simple life of Netflix and extensive naps.”

Poor workouts a couple of weeks prior to being diagnosed qualified as the first telling signs in a sport dominated by being fit. However, she attributed this to a “cold” and not being as prepared as the other girls.

“To be honest, I was completely clueless I had mono,” Moen said. “I went to our athletic trainer with complaints about my glands bothering me on my neck and what I could do, if anything, to alleviate the pain. She sent me to Thielen Student Health and I found out that day.”

Because Moen had redshirted her freshman year of competition, this option was out of the question. The coaches remained supportive, reassuring her of a recovery in the near future.

“It took some time,” Moen said. “I talked with my coach, and it was important that I ease into the training and to feel good while running. I started simple workouts about a week and a half back into running.”

Although Moen was out completely for three weeks, she didn’t feel back to normal until December, after the team’s two-week break after nationals. It was difficult for her to walk the line of trying to stay fit while avoiding having a relapse.

“We had to go off of how she was feeling,” said ISU coach Corey Ihmels. “She would take a couple steps forward, and then a couple steps back. There is no book on how to come back from mono, but I believe it made her a better runner.”

The challenges brought on by not being able to compete coupled with the change in her daily routine — something every student-athlete heavily relies on.

Her coaches and teammates were instrumental during the process, helping Moen see the light at the end of the tunnel. She also learned to indulge in other activities.

“Almost the worst aspect of it was finding something to occupy my time from 3 to 6 p.m. Monday through Friday when I’m normally at practice,” Moen said. “I became a big Ellen DeGeneres fan.”

Maggie Gannon, Moen’s roommate and close friend, was an integral part of her support system.

“Katy has always set high goals for herself,” Gannon said. “I know that last year she wanted to be in a top position scoring points for the team. When she came down with mono, it was devastating to her, but also the squad because we needed her.”

As a runner, it can be hard to listen to your body and take things day-by-day, especially when the squad is running anywhere from 40 to 100 miles per week. Moen stuck to the plan by resting and taking the time off so her illness would pass quicker. If she hadn’t been conservative, she may have jeopardized being healthy until the end of the year.

Even with her own struggles, Moen’s focus was on the team.

“Katy was always supporting us,” Gannon said. “The fact that she even made the trips to support us says loads about her commitment to the program, considering how bad her case of the illness was.”

Gannon believes the Cyclones could have achieved more after placing three runners among the top-three finishers and a seventh-place team finish at the NCAA Cross-Country Championship last year.

“I think the hardest thing for Katy was watching our squad struggle in the four and five spots,” Gannon said. “If we had those locked down, there was no question we would have been a trophy team last year. Katy knew she was capable of being that girl we needed had she been healthy.”

Moen has come a long way from where she was a year ago.

“I remember at the Roy Griak Invitational last year she came to watch and jogged 3 miles for the first time in a month and last week she placed 16th in a competitive field,” Gannon said. “I have always admired her ability to fight back when she races. She applied that same mentality to her mono.”

A positive outlook on a negative situation was key for Moen to fight her battle. She didn’t think wearing the ISU jersey last season was feasible until she continued to make strides during workouts.

“I would say the biggest thing I was able to walk away from Mono knowing was that sometimes what seems impossible, can be do-able,” Moen said. “It’s just important to me to be thankful for what I have at this moment, right now.”