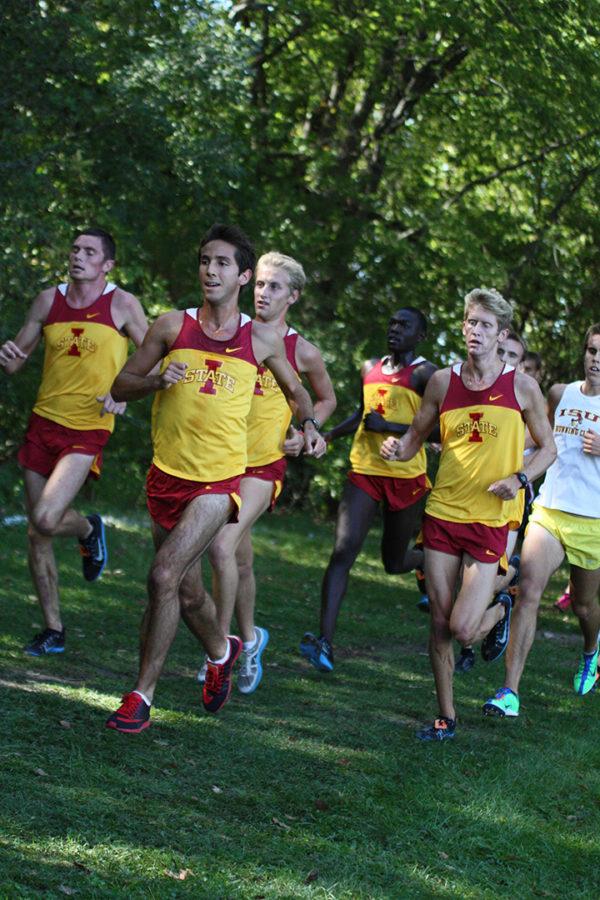 Cross-country runners head towards the finish line, Sept. 15, 2012, at the Iowa Intercollegiate cross-country meet in Ames. The women's team placed first overall. The men saw one of its runners place first but ultimately fell to second place in overall score.

The ISU men’s and women’s cross-country teams will be facing their toughest competition yet while entering the midway point of the season as they compete at the Wisconsin Adidas Invitational on Friday in Madison, Wis.

The majority of the top cross-country teams in the nation will be in Madison for the race.

“It’s going to be like a national meet; it’s that type of challenge,” said ISU coach Corey Ihmels.

The race has an added importance considering that it comes just two weeks prior to the Big 12 Championships and just more than one month away from the NCAA Nationals.

“It’s pretty important to just kind of see where we’re at, because we’re going to be going up against the best competition we’ll see all year until nationals,” Nelson said. “It will kind of show us where — if we’re really at that fifth-place ranking or kind of what we need to work on.”

Ihmels called the meet “a good measuring stick” and one that he hopes both the men’s and women’s teams can “come out of unscathed” and not be “too excited or too down about what happens.”

Coming off a first-place finish at the Roy Griak Invitational on Sept. 29, the ISU women are still looking for ways to improve. Nelson mentioned getting more consistent performances from the team’s No. 4-8 runners, and “closing the gap” between the one through five runners as being two goals the team is working toward.

The men’s team, whose goal all season has been to make the NCAA Nationals, is hoping that a strong showing at the Wisconsin Adidas Invitational will help it achieve a national ranking in the top 25.

The men may be vying to make an aggressive push toward the front earlier on in the race than they have in previous races this season.

The women’s 6K will begin at noon and be followed by the men’s 8K race at 12:40 p.m. The race will take place on Wisconsin’s Thomas Zimmerman Championship Course.