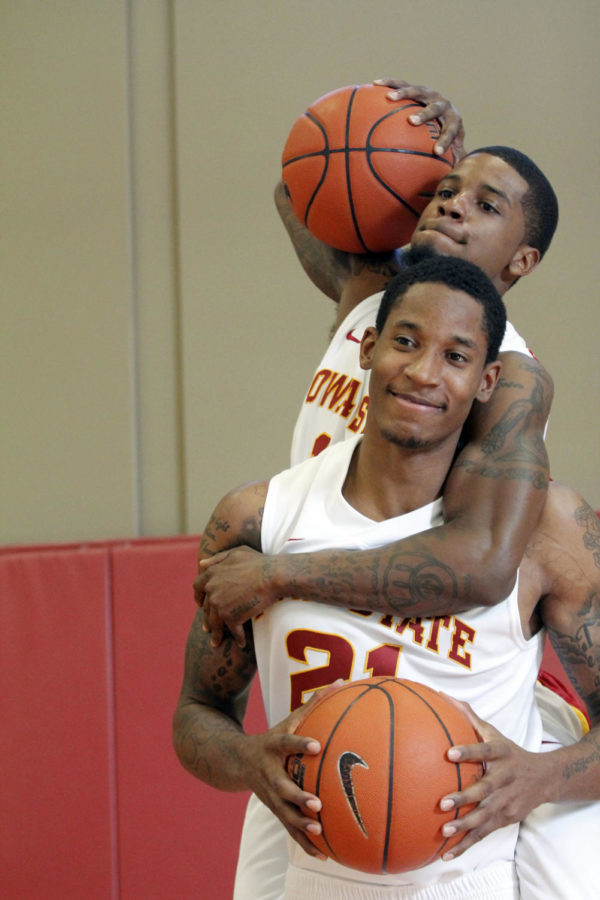 Guards Korie Lucious and Will Clyburn pose for a photo during basketball media day Wednesday, Oct. 10, at the Sukup Basketball Complex.

For the first time since 2005, the ISU men’s basketball team returned to the NCAA Tournament in 2012. Now, the Cyclones’ top three scorers are gone and the door is wide open for someone to assume those roles.

At the team’s media day Wednesday, one looming question was how coach Fred Hoiberg would replace Scott Christopherson, Chris Allen and Royce White. The trio led the Cyclones in nearly every statistical category last season, but Hoiberg said he isn’t concerned about filling the void.

“Collectively I think we’ve got a great group to replace what we’ve lost,” Hoiberg said. “The five seniors that we have on this roster are guys that want to go out with a bang, and it’s a group that’s really been getting after it, providing great leadership to these young guys.”

Due to NCAA regulations, guards Korie Lucious and Will Clyburn were forced to sit out last season in order to play this year.

Not being able to contribute was hard on both transfer guards but Lucious said it’s been worth the wait.

“Just sitting on the sideline watching with [Clyburn], it was hard for us,” Lucious said. “Anybody that’s a competitor that loves playing whatever sport they’re in and watching for as long as I did, it’s hard, so it was hard for me to do, but I’m glad it’s finally here now and I’m ready to play.”

Lucious, a redshirt senior from Michigan State, gives Iowa State the ability to run a fast-paced offense with his quick speed and ball handling skills. A native of Milwaukee, Lucious averaged 6.5 points and 4.1 assists for the Spartans before transferring to Iowa State.

But the numbers don’t tell the full story. Lucious had to play behind Kalin Lucas at Michigan State and didn’t get to play his normal position.

“Playing along a guy like Kalin Lucas, he kind of played the two guard, but the way he can handle the ball is unreal,” redshirt senior Chris Babb said. “His quickness, how he can attack the basket and how he can shoot it, he’ll be one of the best point guards in the league.”

Clyburn brings a slightly different playing style to the Cyclones. At 6-foot-7, 210 pounds, the Utah transfer can clean the glass with his rebounding ability and make shots from beyond the arc, as well.

Clyburn led Utah in three-pointers and three-point percentage in his lone season at Utah before transferring, but Hoiberg said his rebounding will be important with White gone.

“The thing that I’ve been most impressed with … is his ability to rebound,” Hoiberg said. “You lose Royce, and who’s going to make up those ten rebounds that we lose there, and [Clyburn] is getting everything.”

Losing the guy who led your team in every major category, offensively and defensively, always creates big shoes to fill.

White allowed Iowa State to exploit other teams on offense by being able to take the ball up and run the offense against maybe a less-athletic post player. This also limited the team to playing at a faster pace, but the same won’t be the case this year.

As of now, Lucious will be running the point for the Cyclones. Lucious said playing in transition will be something they try to do which should allow them to get going on the shooting end.

“Now this year, I think we’ll be able to get up and down a lot more, run a lot more pick and roll opportunities and it’s going to open it up for our shooters as well as myself and our bigs, so that’s what we’re looking forward to,” Lucious said.

With his similar wingspan and ability to shoot and play in the paint as well, comparisons between Clyburn and White have been circulating since his transfer became official.

Hoiberg acknowledged he might try to have Clyburn take the ball up sometimes considering the success White had with it last year, but Clyburn said he’s trying to be himself.

“I hear, but I really don’t pay attention to it; I just know that Royce is Royce and Will is Will, so I’m just going to go out there and play my game and that’s that,” Clyburn said.

But when asked about who’s a better shooter, Clyburn affirmed confidently that he has the leg up on the current Houston Rocket.

Even though the team made its first NCAA Tournament in seven years, Iowa State is far from being complacent.

Hoiberg scheduled some competitive non-conference matchups this year with that in mind and said they want to be ready when conference games begin.

“Our expectations are high,” Hoiberg said. “We’ve got some very difficult non-conference games that we’re looking forward to because that will prepare us for Big 12 play.”

While the Cyclones have six seniors who bring experience from a variety of backgrounds, they also bear six freshmen who haven’t felt what it’s like to play in front of a Big 12 crowd.

The team does have the skills on paper to be able to put together another NCAA tournament-caliber season, it just depends how it performs on the court.

With the senior leadership the team has this season, Babb said he has full confidence in their chances at another tournament berth.

“With the talent level we have and the level of experience we have with our six seniors, I think the sky’s the limit for this team,” Babb said.