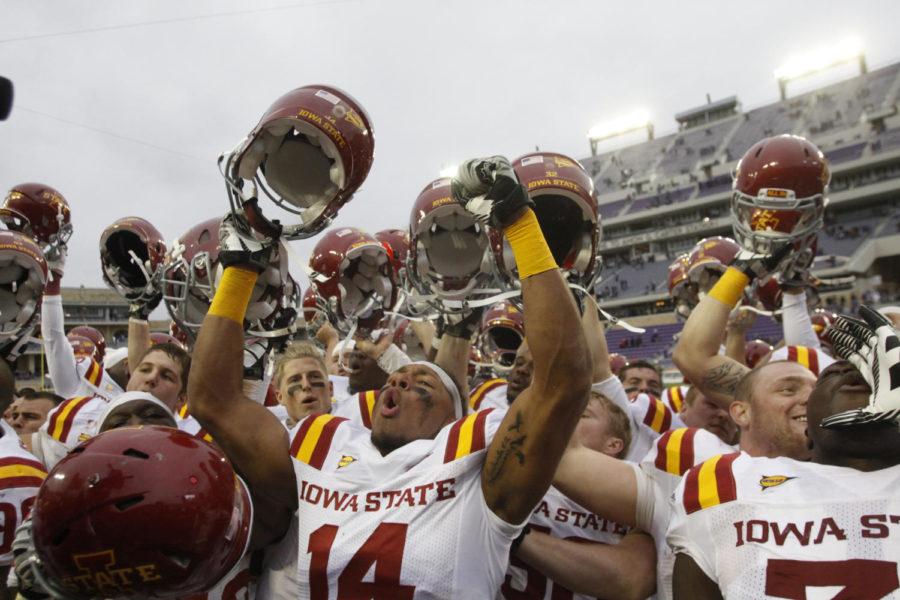 The Cyclones celebrate after upsetting No. 15 TCU on Saturday, Oct. 6, at Amon G. Carter Stadium in Fort Wort, Texas. The Cyclones have now beaten a ranked team in the state of Texas for three consecutive years for the first time in school history.

FORT WORTH, Texas — The ISU football team clinched its first conference victory as it defeated No. 15 TCU 37-23 in Forth Worth, Texas, on Saturday.

Jared Barnett turned out to be the starter Saturday, and he was — statistically speaking — an excellent choice.

In his first drive, Barnett went 2-for-3 for 70 yards and a connection to Josh Lenz for a 51-yard touchdown. Lenz’s touchdown reception was the longest of his career.

On the next drive, Barnett boosted his stat line to 6-for-7 for 79 yards, resulting in a field goal and putting the Cyclones up early 10-0.

Barnett was 7-for-8 with 153 yards and two touchdowns at halftime. Jantz only had three passing yards after the first half in the Cyclones’ game against Texas Tech on Sept. 29.

By the end of the first quarter, the defense had forced one interception, which resulted in a 46-yard field goal by Edwin Arceo.

TCU got its first points of the game came when Trevone Boykin connected to wide receiver Aundre Dean with 1:50 remaining in the first quarter.

Arceo was 1-for-1 on field goals, but missed his third PAT this season in just five games.

Heading into the second quarter, possession time was almost even. TCU had the ball for 7:55 and Iowa State with 7:05.

The second quarter was filled with offensive turnovers by TCU and fizzling drives by the ISU offense.

TCU fumbled and lost the ball twice in the second quarter. Unlike the field goal, Iowa State capitalized off of in the first quarter interception, Iowa State punted the ball after taking the ball from the Horned Frogs.

TCU was the next to score late in the second quarter on a 38-yard field goal.

From there, Barnett threw a late second-quarter interception, which gave the ball back to the Horned Frogs with one minute remaining in the half.

A quick three-and-out gave the ball back to the Cyclones, who decided to run the rest of the quarter out with a knee.

Iowa State was able to establish a run offense at the beginning of the third quarter. Iowa State went from 33 rush yards to 123 in one quarter of play.

Barnett connected with Lenz for his third receiving touchdown midway on the first drive of the third quarter.

On the ensuing kickoff, TCU’s Skye Dawson returned the ball 52 yards. On that drive, TCU muscled its way into the end zone to put it behind Iowa State 23-17.

With 5:17 left in the third quarter, TCU was able to strike once more on a 50-yard field goal, cutting Iowa State’s lead to three points 23-20.

A couple penalties kept the drive alive for Iowa State and eventually led to a trick-play touchdown thrown by Lenz.

Lenz connected with Ernst Brun on a 15-yard trick play. Lenz is 2-for-2 passing in his career, both resulting in touchdowns.

If quarterback troubles couldn’t get worse, TCU’s quarterback, Boykin, went off the field after being shaken up on a play. Wide receiver Matt Brown came in for Boykin at quarterback, rushing for -5 yards.

TCU settled for a field goal after Boykin went out and got back within seven of the Cyclones.

The Cyclones then went three-and-out on the ensuing drive and gave the ball back to TCU.

However, the Horned Frogs weren’t able to capitalize on the Cyclone offensive fizzle, and TCU turned the ball over for the fourth time.

After coming back into the game, Boykin threw a pass that was tipped and returned by David Irving for 15 yards for a defensive touchdown, putting Iowa State ahead 37-23.

After a couple of fourth down conversions, TCU was able to move its way down the field, but Boykin threw a late interception on the ISU 3-yard line.

Jake Knott was standing in front of Boykin and intercepted the pass for his eighth-career pick.

The rest of the game resulted in Iowa State running the ball to run out the clock. The interception would be the last time TCU had the ball.

“A lot of us would agree, we love coming into hostile environments. We’re a band of brothers coming in. We stayed together through the end. It didn’t matter what happened on offense or defense, we stayed together.” — ISU defensive tackle Jake McDonough

“[Josh Lenz] really took advantage of opportunities. And that’s what successful teams do. When you’re targeted and you get the opportunity to make a play … you’ve got to step up. And he led the charge.” — ISU coach Paul Rhoads on Lenz’s career high game.

“I just run my routes and he just throws it to me. I hope he keeps throwing it my way.” — ISU wide receiver Josh Lenz on quarterback Jared Barnett