Belief Sings Out on Campus 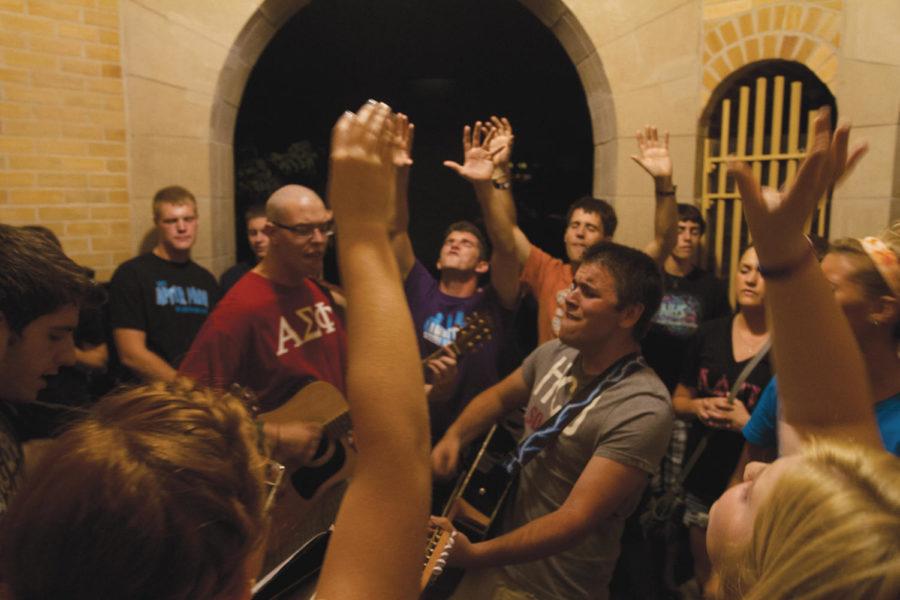 A group of students gather together under the Campanile on Central Campus to sing worship songs at 9 p.m. every Wednesday.

The Campanile tolls 9 p.m. Wednesday, and the students gather beneath its chiming bells. Voices ring out to match the bells’ toll and they all convey a similar message. Before the guitars begin, black folders snap open and pages turn. “Let’s do this song,” a voice cries, and then the harmonies begin to ring the deepest part on one’s eardrum.

“This is purely for people who want to just worship,” said Brendan Bartels, sophomore in biochemistry.

The small group of musicians met on campus and found a mutual love of worship music. Since then, the members chose to simply meet once a week and take some time to relax and play their favorite music. Bartles has been with the small group of students since the group’s inception.

“We started playing on our floor, in Friley window’s,” Bartles said, “then we gradually moved out to the Campanile.”

Ryan Schneider, sophomore in criminal justice and one of the group’s guitarists, said the reason behind the group is “very simple.”

“We’re here to praise Jesus and to give glory to Him,” Schneider said.

The sight of all the musicians could be a little overwhelming to some, but many find comfort at the Campanile at 9, including Lauren Perila, freshman in early childhood education. Last Wednesday marked her first time visiting the site.

“I live in the Towers, and a girl on my floor texted me and said: ‘Come worship with us tonight.’ I thought: ‘Why not?’ Perila said.

The Rev. Jim Shirbourn has been a minister at the United Methodist Church on Lincoln Way for roughly 16 years. Shirbourn had no idea that students were participating in this gathering

Shirbourn said that student participation in worship services differentiates, depending on how it is measured.

“For our traditional or alternative services, it can be roughly 50 percent students and 50 percent families or elderly,” Shirbourn said.

Shirbourn is confident that the group will increase in numbers over time and hopes to share his advise with them. Years ago, Shirbourn began to become interested in group dynamics and theory, which could aid this group of students in their pursuits.

“What ever kind of group it is, whether it’s a study group or a classroom, whenever you add more people, the dynamics of the group changes,” Shirbourn said.