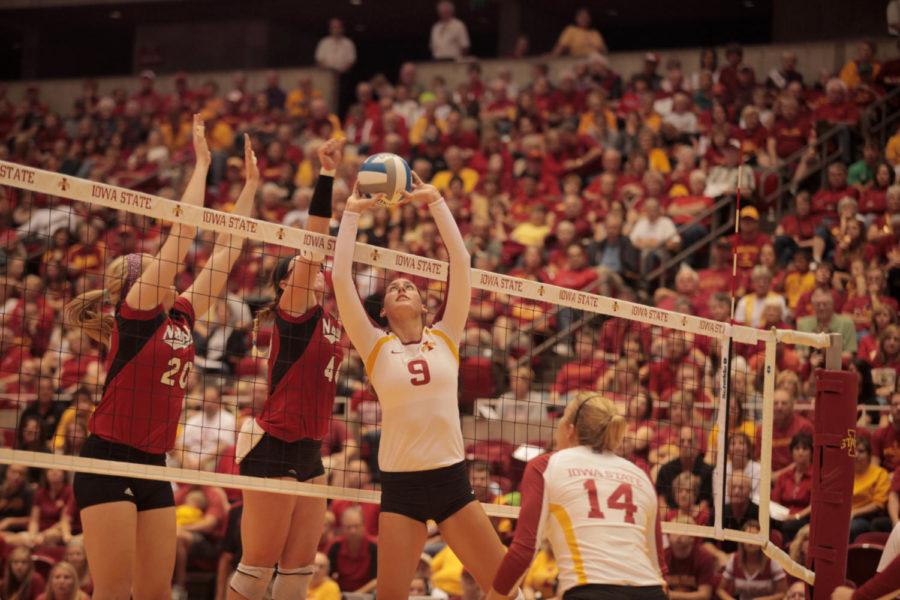 Alison Landwehr attempts to set the ball during the game against Nebraska on Saturday, Sept. 15, at Hilton Coliseum. Cyclones won 3-1, which is the first time Cyclone volleyball team has defeated a No. 1 team in school history.

Aside from having another shot at a Big 12 Conference title, the ISU volleyball team is excited for a change of scenery.

The exit of both Missouri and Texas A&M to the Southeastern Conference has brought the addition of Texas Christian and West Virginia to the Big 12, which has made the team excited.

“It’s really exciting, especially because I’ve never been over to the East Coast,” said Kristen Hahn, of the new additions to the conference. “Traveling over to West Virginia will be really cool, and just traveling with your team is always exciting.”

That sentiment was widely shared, but the two new schools also bring uncertainty.

What is known is that last season Texas Christian went 25-7 as a member of the Mountain West and West Virginia went 7-19 while playing in the Big East.

“I feel like there’s a lot of unknowns right now,” said ISU coach Christy Johnson-Lynch. “To me, I feel a little bit more uncertain this year about how the teams will get settled in the Big 12.”

After playing several matches in the same gym during the past four years, senior Alison Landwehr said it will be nice to play in new locations.

“Usually we know what to expect going into a gym,” Landwehr said. “It can work into your advantage or it can work against you; going into those places is also a little refreshing.”

So far this season, two Big 12 schools — No. 9 Texas and No. 11 Kansas State — are ranked above No. 19 Iowa State. The Cyclones are fresh off a weekend victory against previously No. 1 Nebraska.

“In the Big 12, you never know what’s going to happen,” Hahn said. “I think just making sure you’re prepared for every game mentally and physically is huge.”

To be prepared for the final 17 matches of the season — 16 of which are conference matches — Johnson-Lynch scheduled a difficult preseason schedule.

During the past three weeks, the Cyclones have played 10 total matches, and six of those have been against top-25 opponents.

“I hope that it helps a lot, that was kind of the plan,” Johnson-Lynch said of the schedule.

Iowa State won three of those top-25 matches, beating Illinois, Northern Iowa and Nebraska. Despite being 6-4 following that nonconference stretch, Johnson-Lynch is satisfied.

“I’m happy with where we are,” Johnson-Lynch said. “I wish we could have won a couple more, but I feel good about where we’re at and what we’re looking at heading into the Big 12.”

And compared to most of the other eight Big 12 teams, the Cyclones have already faced a difficult test.

“I think we’ve definitely been tested way, way more than other teams,” Landwehr said. “Some teams may fall into traps that we’ve already fell into — losing some games maybe we shouldn’t have — [and] some teams may have to do that in the Big 12 season.”