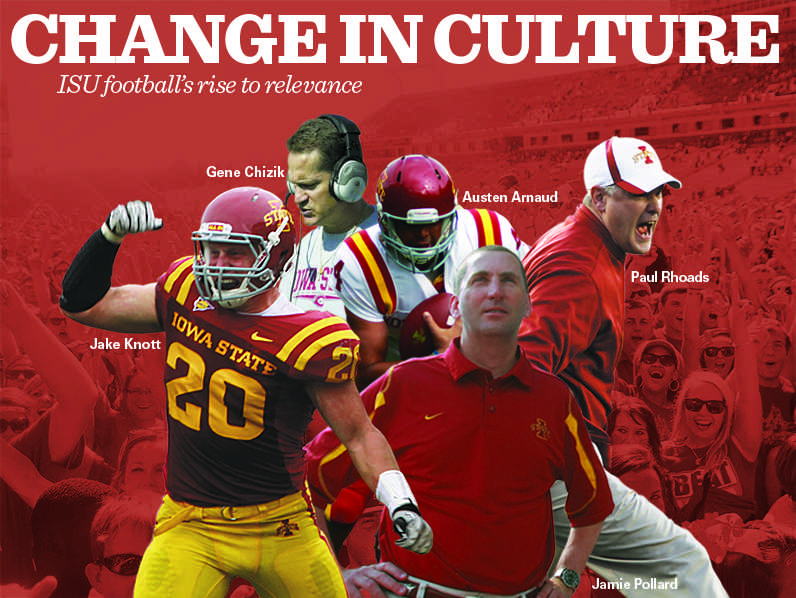 Ever since Jake Knott came to Iowa State as an underlooked recruit, he’s been coached to go beyond expectations.

Now a three-year starter at linebacker, Knott has accumulated 290 career tackles as a key catalyst to the rise of relevance for the ISU football team during the past four years under coach Paul Rhoads.

Expectations were exceeded for Iowa State in last Saturday’s 37-3 win against Western Illinois that drew an attendance of 55,783 — fourth-largest in school history. Had that game been played before this season, that milestone would not have been met against a low-tier FCS team.

“Freshman year, if we weren’t playing a big-name opponent or a rivalry game, the stands weren’t full,” said Knott, a true senior. “We played Western Illinois and the stands were completely packed and that’s huge to have that.”

That, coupled with the team’s 3-0 start in consecutive seasons for the first time in more than a decade, has yielded a change in culture surrounding the ISU football program that has fostered optimism and excitement from the ashes of what it once was.

The 2011 season saw all six home games draw an attendance of more than 50,000 for the first time in school history and a record average of 53,647. That streak has extended to eight with the Cyclones’ first two home games this season.

ISU Athletic Director Jamie Pollard said he envisions “bowling” in the south end zone of Jack Trice Stadium that would remove hillside seating in those sections to add to the stadium’s capacity of 55,000.

However, Pollard said there is no plan to do begin funding for this in the immediate future.

“I’d love to be at a school that has sold out for 10 straight years,” Pollard said. “I hope next year at this time we’re still sitting here saying, ‘There’s 55,000 people at every home game.’ That would be awesome.”

New additions resulting from the change in culture include the new $20.6 million football facility adjacent to Bergstrom that is expected to open in October and the 36-foot-high scoreboard at the north end of the stadium that debuted last season.

Record attendance and new facilities are evident benchmarks in the change of culture for ISU football.

In the two years before Rhoads’ arrival, the team went 5-19 under Gene Chizik, who left Iowa State to go on to win a national championship at Auburn.

”The rumors you heard about him saying ‘this is the toughest job to ever coach’ and ‘this job sucks’ might have been true,” Arnaud said. “Iowa State is a very tough coaching job and unless you have guys like coach Rhoads that are going to be there for the long haul … you’re not going to have a very good program.”

Chizik’s years at Iowa State may have been marred with disappointment, but they were not considered insignificant to the change in culture that is prevalent now.

“Everybody played a role,” Pollard said. “You build things one step at a time and those were steps in the process — although very painful steps — that needed to be taken.”

The symbolic healing from those steps began when Rhoads was hired on Dec. 20, 2008, one week after Chizik’s departure.

Immediately after his hiring, Rhoads reached out to his disparaged players.

“You’ve got to establish relationships,” Rhoads said. “As soon as we got back off the road from recruiting, I met with every single player one-on-one.

“And the last thing you want to start talking about is football.”

Although Rhoads’ hiring was seen as the turning point for the program, Pollard said many talented players would not have come to Iowa State had it not been for Chizik.

“That’s an indictment on them when someone would say [Chizik] was bad,” Pollard said of the players. “They were a good team, they just weren’t ready to win.”

It was Rhoads’ recognition of their potential and development of talent, Pollard said, that translated into success on the field.

Playing for Rhoads paid off for redshirt senior Jake McDonough, who became a run-stopping force at nose tackle after coming to Iowa State an undersized 220 pounds — 60 pounds lighter than he is now.

“He’s more on a personal level with all of our players,” McDonough said of Rhoads. “He’s more like a father figure to us, so it’s easy to want to play for him.”

It was the development of Chizik recruits like McDonough that Rhoads and his staff are responsible for, having fostered a “family culture” within the program.

Knott attributes the change in culture of ISU football to its recent success under Rhoads, the first coach in school history to lead his team to two bowl games in three seasons.

“The expectation was established that first year to be a program that could win bowl games,” Rhoads said.

Rhoads is 21-20 in his three-plus seasons as the ISU football coach. While the team suffered discouraging losses in that stretch, its wins have also been noteworthy.

“It comes with the wins, basically,” Knott said. “People are coming out to support you if you’re winning; if you’re losing, it’s not a product they want to watch on the field. Right now I feel like we’re a product the fans enjoy.”

While Iowa State has shown it can be competitive with the toughest opponents in the Big 12, drawbacks still remain.

“The Big 12 keeps getting better and the margin for error is just so slim that it puts Iowa State sort of behind the eight ball,” Ubben said. “The bottom line is Iowa State is never going to recruit on the level of Oklahoma or Texas, it’s just not going to happen.”

Ubben drew parallels to Kansas State, which utilized recruitment of players from junior colleges and developed talent level to remain competitive. Kansas State made it to a BCS bowl in 2003, but Ubben said Iowa State is not yet at that level.

However, that does not deter Knott from shooting for a BCS bowl this season — something that was vastly thought to be unthinkable of the team’s expectations four years ago.

“I don’t see any reason why we should put limits on ourselves,” Knott said. “We’re building a championship program here. To be able to do that, the old mindset of giving into defeat, we’re trying to get rid of that and we’re doing that every week. That’s what we’re shooting for right now.”