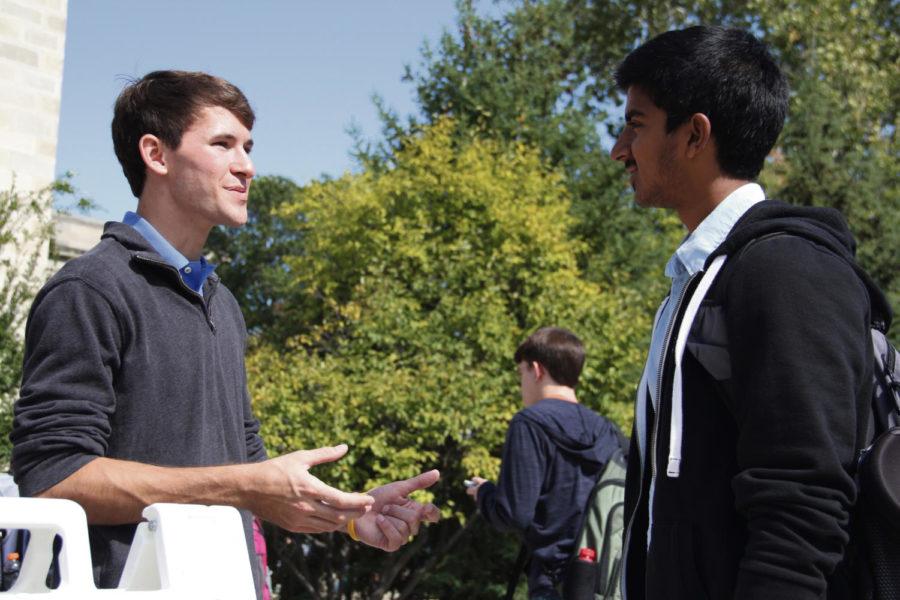 Jake Swanson,GSB senator for the College of Agriculture, talks with Deepak Premkumar, junior in economic and global resource systems about the Government of the Student Body on Wednesday in front of Parks Library.

Connecting with constituents is one of the biggest priorities for the Government of the Student Body throughout the year, and their annual “Meet Your Senator Day” is proof.

GSB senators and cabinet members gathered Wednesday afternoon outside of Parks Library to talk to students about what GSB does, asking students what they are concerned about and what they would like to see changed.

“GSB senators really do want to meet with their constituents, and holding events like these is just another way that GSB senators are reaching out to the student body,” said Jake Swanson, senator for the College of Agriculture and Life Sciences and junior in global resource systems.

During the meet and greet event, members of GSB put up a poster board along with posted notes and encouraged students to write down what they liked about what GSB was doing, what they thought they should do better or any concerns that the students had that the senators should look into. Comments students made pertained to the cost of tuition, the need for more emergency call towers and the idea that professors are not concerned about students’ time.

“We hope that students will come up to us and know that we are out here working for them,” said Andrew Gall, GSB chief of staff and senior in mechanical engineering, “and that we want to hear their comments, concerns and have them ask questions of us.”

The event allowed senators and students to interact in a less formal way than their usual Wednesday night meetings. It also allows students to get more comfortable with their senators and to meet the person who is representing them. As Gall put it, “this event shows that we are students just like them.”

Many students voiced comments and concerns, and some voiced praise of the student government.

“It’s great to know that our student government is very approachable and willing to discuss my concerns as a student,” said Emily Kroloff, junior in animal ecology.

Throughout the afternoon, senators encouraged students to take a more active role in student government and to give more feedback to GSB so they could understand student issues better.

“We have had more participation from students with specific concerns; this shows that students are moving from awareness to action,” said Austin Ballhagen, off-campus senator for GSB.