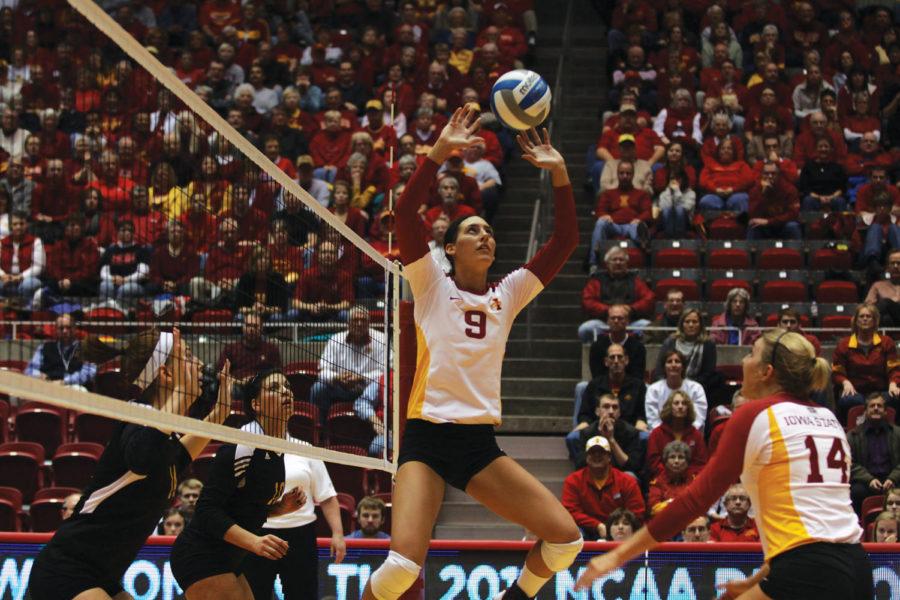 Setter Alison Landwehr sets the ball up for a kill during the match against UW-Milwaukee in the first round of the NCAA Volleyball Championships of Friday, Dec. 2. The Cyclones won in the first three sets, advancing them to the second round.

In little more than a 24-hour time period, the No. 10 ISU volleyball team will face the likes of two top-15 nationally ranked opponents, as well as a team it faced in the 2011 season opener at the 2012 Comcast Lady Vol Classic in Knoxville, Tenn.

ISU coach Christy Johnson-Lynch said for the team to be ready to face high level competition such as the three teams in Knoxville, her squad will have to work on a few areas.

“I think we can block a lot more balls, recognizing where hitters are in their approach,” Johnson-Lynch said. “I didn’t think our coverage was very good [in the scrimmage] so I want to work on that a little bit.”

Senior middle blocker Jamie Straube said it is exciting to finally begin play against outside competition after scrimmaging against her own team for so long.

“It’s always fun to see how we match up against some of the best teams in the country,” Straube said. “From what I can tell about this team, I think we are really going to raise to the level of play of our competition, so it’s really good for us to play such good teams right off the bat.”

On Friday, Aug. 24, Iowa State will face Cincinnati, a team the Cyclones defeated 3-1 last season. The next day, Iowa State will get a rematch in the 2011 Elite Eight against No. 12 Florida State, followed by the Cyclones’ final match against the host, No. 15, Tennessee.

Senior setter, Alison Landwehr, said after Iowa State was defeated by Florida State in the 2011 Elite Eight 3-2, it will be exciting to face off again in 2012.

“I know they are a very different team than last year and we are too,” Landwehr said. “It’s going to be a completely different game, but it’s kind of cool that we get to play them again right off the bat.”

Johnson-Lynch said while it will be exciting to face Florida State again, the Cyclones will have to stay focused on the other teams, which are also going to be tough opponents as well.

“At the same time, we’ve got three great teams to play, so I don’t think we are going to spend too much time getting wrapped up in one team.”

While the weekend will be physically challenging for the team, Landwehr said playing so many matches in a short time span is also a mental factor.

“Three matches is a lot and having the two better teams the same day is going to be a lot,” Landwehr said. “That’s going to be mentally challenging more than anything. Especially being one of our first matches, it’s just making sure we get the nerves out and hopefully the seniors can shed some light on that and get the girls who haven’t played more comfortable.”

Straube said while the weekend will be daunting, it will be fun to see the freshmen jump right in and compete against tough competition early in the season.

“It will be eye-opening for sure just because the game is so much faster,” Straube said of the freshmen. “I remember coming in as a freshman and you think you know [what to expect], but until you get in there, you don’t really understand. But they’ll be great. They’ve been working so hard and practicing really well, so I’m sure they will be fine.”

Iowa State will face Cincinnati at 4 p.m. on Friday, with the Florida State game at 11 a.m. on Saturday. The Cyclone’s closing game is 6:30 p.m. Saturday against Tennessee.