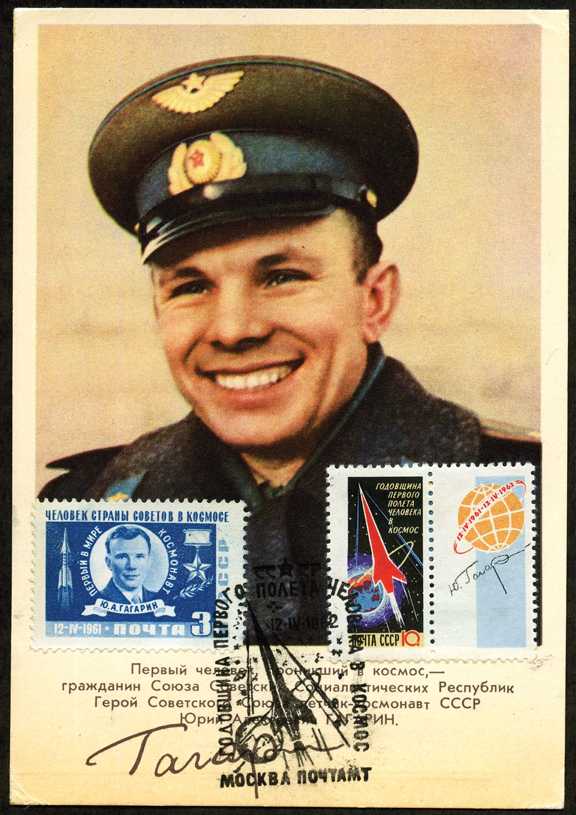 Cosmonaut Yuri Gagarin was the first human to journey into outer space when his Vostok spacecraft completed an orbit of Earth on April 12, 1961.

Fifty years ago today, humans first flew into space, the vast frontier beyond our home planet. The first man in space was not an American, but a Soviet fighter pilot named Yuri Gagarin. He only flew one orbit of the Earth over about an hour and a half, but it was a giant leap for humanity and a feat that led to a great many technological advancements in the following years and decades.

A few friends of mine have been working for months on Yuri’s Night 2011, a celebration of Yuri’s flight as well as spaceflight in general that has happened every April 12 since 2001, when Trish Garner, Loretta Hidalgo  — now a Yuri’s Night Director and Zero-G Flight Director — and George T. Whitesides — now CEO and President of Virgin Galactic — set up the first series of parties around the world. This worldwide celebration marks both the first human spaceflight as well as the first flight of the space shuttle 20 years later in 1981. This year’s celebration of the golden anniversary of human spaceflight will have the greatest number of parties yet. The event’s website at yurisnight.net today lists more than 425 events in 70 countries.

One of these events will be right here on the ISU campus. The Iowa State Space Society and the Iowa State AIAA groups have teamed up to do a few exciting things Tuesday night to mark the anniversary of human spaceflight. The festivities include screening a brand new movie about Yuri’s flight, demonstrations from the Aerospace SSCL lab, an LED-lit night high-altitude balloon launch and late-night stargazing. If you want to find out more or to attend the event, click the link to the Facebook event listed with this article on iowastatedaily.com or simply stop by Howe Hall at 5:30 p.m. Tuesday.

This will be a special year for this event, as the reign of the space shuttle as America’s premiere human launch vehicle is ending and a new era in spaceflight is beginning. We’re still unsure what will happen during the coming years of human spaceflight. Some say that we shouldn’t be flying humans into space when we could do the same work with robots like the Canadarms, Robonaut 2 or any of the other numerous probes and rovers humanity has sent out into the solar system and beyond. But I believe that human spaceflight will always have a place in our work to scientifically explore the world around us and expand the purview of human knowledge.

Just because it is dangerous to fly into and do experiments in space does not mean that we should stop doing them. It is just as dangerous to go explore the bottom of the oceans or the inside of a volcano, and yet scientists do this type of work every day.

Space exploration is just as important because it could be argued that even if we learned everything there is to know about the unexplored phenomena on our planet, there would be exponentially more knowledge to be gained among the other stars in our universe. Remember that if you stargaze on a clear, dark night, you will see thousands of stars, though for each one of those stars, there are about 100 million other unseen stars in our Milky Way galaxy. Oh yeah, and there are another 100 million galaxies the size of our own.

Once the space shuttle is retired and the last orbiters take their places in various museums across the country — the list of museums to receive a shuttle will also be released April 12 — there will be multiple vehicles available that could take their place. Space Exploration Technologies of Hawthorne, Calif., is actively testing its Falcon 9 rocket and just announced the — also human capable — Falcon Heavy rocket that can loft twice the capacity of the space shuttle into orbit. The Boeing Company is working on development of a simple commercial capsule that could be launched on multiple launch vehicles to carry crew to the space station. The Sierra Nevada Corporation is working on the Dream Chaser to do the same job and based its space plane on a concept started and then dropped by NASA.

Congress, in a very anti-commercial way, is not especially keen on allowing private companies to provide NASA with transportation to and from the International Space Station or to loft NASA payloads to the moon or Mars. Many people I know have been trying to change this, but it is tough to sell NASA as a program that is more than a job program for congressmen and congresswomen’s individual states.

Hopefully, the space industry’s current state of flux will eventually resolve into a strong plan for scientific exploration and discovery and we will have even more to celebrate in 2061 on the 100th anniversary of human spaceflight.