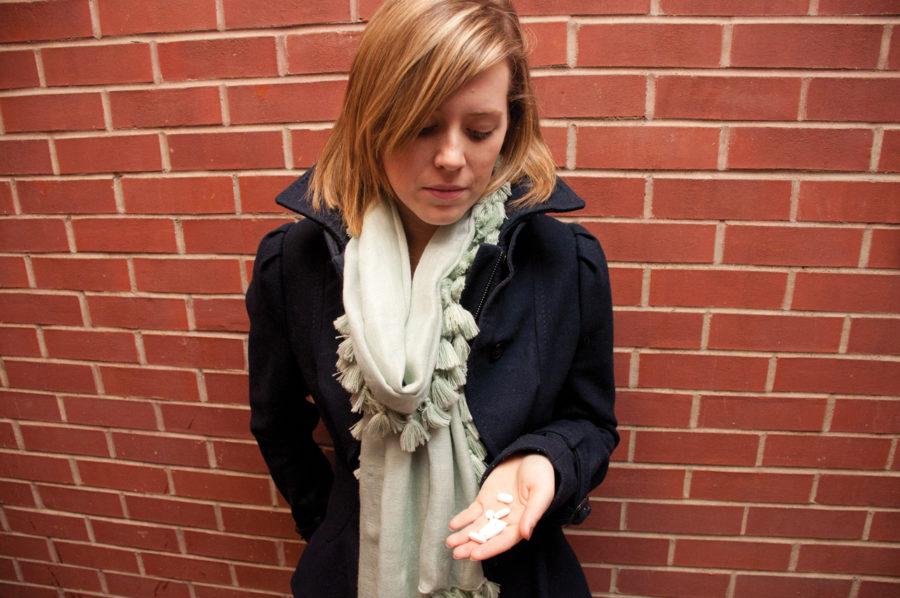 Andrea Fox, senior in hotel, restaurant and institution management, shows the pills that she would have to take everyday to surpress her illness.

Through her 21 years, Andrea Fox has had experienced many things, ranging from learning how to ride a motorcycle to battling cancer.

Andrea, senior in hotel, restaurant and institution management, was a sophomore at Iowa State when she received the news she had cancer.

“I’ve never really been sick in my life,” Andrea said. “But my freshman year in college, I started sleeping a lot and I would get these huge bruises. I would also randomly get really nauseous.”

A petite-framed girl, she knew there was something wrong when her spleen enlarged to the size of a basketball, distending the upper part of her stomach.

“I was experiencing severe abdominal pain that was so severe it would wake me up at night,” Andrea said. “So I went to the Thielen Health Center and they did some [complete blood count] tests. I was in a room back by the nurses’ station sitting on the couch and I could see the doctors in there whispering.”

Getting an uneasy feeling, she called the most supportive person she knew, her mom.

“Andrea called me and was like ‘Mom, the doctors are in the hallway whispering. I don’t know what that means, but I’m not sure it’s good,'” said Vicky Fox, Andrea’s mother.

“That was our first conversation. They told her, her white blood cell count was high and they thought it was a mistake, so they wanted to do another test. Later, I talked to the doctors and nurses on the phone. They told me they thought Andrea had leukemia. I was in the car in 10 minutes, on my way to Iowa.”

The doctors informed Andrea that her white blood cell count was rather high and that they wanted to do another blood test.

Doctors suspected Andrea may have leukemia so she was taken to the William R. Bliss Cancer Center at Mary Greeley Hospital.

There, a bone marrow extraction was done on site.

“I had eaten earlier that day so they were unable to heavily sedate me,” Andrea said. “So with only slight sedation, they did the procedure. I was conscious for the whole thing.”

After a week in the hospital, Andrea was officially diagnosed with having chronic myelogenous leukemia.

“It was surreal,” Andrea said. “The only thing that came into my mind when they told me was ‘A Walk to Remember,’ because the girl in that movie had leukemia. I wasn’t really aware that leukemia was a cancer. I just knew that it was a disease and that it was bad.”

“I was scared to death,” Vicky said. “I don’t think Andrea quite knew what leukemia was. She just knew it was an ominous-sounding disease.”

Chronic myelogenous leukemia is an uncommon cancer of the blood cells, according to the Mayo Clinic’s website. This leukemia occurs when the bone marrow makes too many white blood cells and typically affects older adults, rarely occurring in children.

“I never had health issues so I didn’t make very many visits to the doctor’s before I was diagnosed,” she said. “After that day though, I was making weekly doctor’s visits. Each visit would be a two- to four-hour process with blood being drawn and all that. I was forced into a daily regimen with medications.”

Andrea said at first the diagnosis caused her to be depressed for about a year.

“This is something that I will have forever,” she said. “At first I was depressed. There wasn’t an immediate change to how I am today. At some point I realized that knowing you may not live makes you want to do everything.”

“I don’t want to waste my moments being unhappy or confused. I live in the moment for myself. I’m not dying today, I’ve learned how to drive a motorcycle, I got to celebrate my 21st birthday with all my friends and I’m graduating on time. I’m happy.”

As is the case for many families of cancer victims, Andrea’s illness affected her mother very deeply.

“Initially the doctors were saying that it wasn’t real bad, that there was great drugs to fight it and she would be in remission in 12 months,” Vicky said. “Twelve months came, then 18 months came and then the first drug they had her on failed.”

“There are only three drugs you can take for this leukemia and she was down to two options for drugs. You just want it to go away and to able to depend on what the doctors say. As a mother, I was scared to death.”

However, this wasn’t quite the hardest part for Vicky.

“The hardest part was making her go back to school,” she said. “After a week in the hospital, she came home for a week and this was before the medical reform so if we didn’t send her back to school, we would be without insurance.”

“And if having leukemia isn’t bad enough, it’s worse to have leukemia and be without insurance for the leukemia. I told Andrea, ‘I don’t care if you fail every single class, you have to resume your life.'”

Since the first day she was diagnosed with leukemia, Fox has had four separate bone marrow aspirations, endured numerous doctor’s visits, with so much blood being taken from her arms that scars are forming, and has been on and off 15 different medications to help control not only the leukemia, but also the side effects each medicine may cause. As of March 4, Fox was officially announced to be in remission.

“The goal was remission,” Andrea said. “We want to fool my body into thinking it doesn’t have the cancer.”

Vicky said it was her daughter’s outlook that helped her get through the whole ordeal.

“Her reaction was making jokes about everything,” Vicky said. “It wasn’t a big deal to her. I think it was the fact that she was handling it so well that helped me.”

This year Fox was emailed by Colleges Against Cancer to be an honorary survivor speaker for Relay for Life, which will take place March 25.

“I received a list of the Survivors from the American Cancer Society at the beginning of the year and emailed the Survivors right away to let them know who I was, what my position was, and to try to get as many of them involved as I could,” said Laura Hoaglund, senior in meteorology and survivorship and leadership chairwoman for Colleges Against Cancer. “I asked them to send me their cancer stories; Andrea’s email was one of the first emails that I received back.

“When I read her story, full of inspiration, courage, and bravery, I teared up,” Hoaglund said. “I noticed that she was still enrolled here at [Iowa State] and thought that she would be a perfect Honorary Survivor for Colleges Against Cancer because it would be easy for college kids to relate to her.”

“I thought it would spark more interest in getting people involved. We all need to realize that cancer is real, it doesn’t care about age, race, ethnicity, or social class someone may be in; it doesn’t discriminate against anyone and it has an affect on everyone.”

The honorary survivors usually speak at the beginning of Relay for Life, sharing their story with the participants.

“It’s a great way to start the Celebrate Ceremony and inspire the people at Relay,” Hoaglund said.