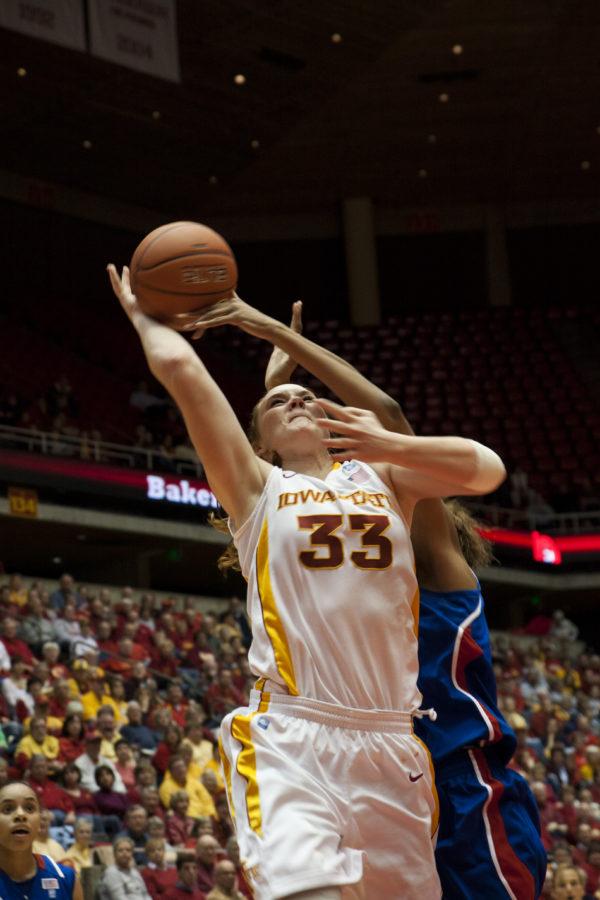 Forward Chelsea Poppens draws a foul in the first half of Iowa State's routing of Kansas, 72-36. Poppens led the team with seven rebounds and 13 points.

While Hilton Coliseum may have seen its final action of the season, there is one game left for the Cyclones. Iowa State matches up with Missouri in Columbia at 5p.m. Saturday.

The last time these teams met, Iowa State (21-8, 9-6) came away with a 71-56 victory at home. Four starters reached double digits for the Cyclones and sophomore forward Chelsea Poppens pulled down a career-high 19 rebounds.

“I’ll probably be more confident going down there than I usually am,” Poppens said.

Poppens is coming off another solid performance in the 72-36 victory over Kansas. She scored 13 points and grabbed seven rebounds in the victory.

Poppens and the rest of the supporting cast around senior shooting guard Kelsey Bolte were on full display in the Kansas game. That has helped the Cyclones win four straight games.

“We’ve just really been working hard and knowing that we can do better than we have in the past,” Bolte said.

Poppens feels the team’s practice time has been paying off in the games.

“We’ve worked really hard in practice and its transferred over to game situations,” Poppens said.

Missouri (12-17, 4-11 Big 12) is lead by guard Raeshara Brown, who is averaging 17 points per game for the Tigers. Christine Flores also helps out with the scoring load at 13 points per game.

Shakara Jones was the main contributor for the Tigers in the previous matchup. Jones finished with 16 points and seven rebounds. Flores and Brown had 12 and 11 points.

Iowa State will secure the No. 4 seed in the Big 12 tournament with a win and/or a Kansas State loss to Kansas.

Even with the balanced scoring over the past couple weeks, Bolte is still the only player that is averaging double figures in points at 17 per game.

“You just have to wait and see who gets hot that night,” said coach Bill Fennelly. “If someone does, then were going to have a good night, if someone doesn’t then we’re going to struggle. That’s been the formula for our team all year.”