Students train for Regents’ Day on the Hill 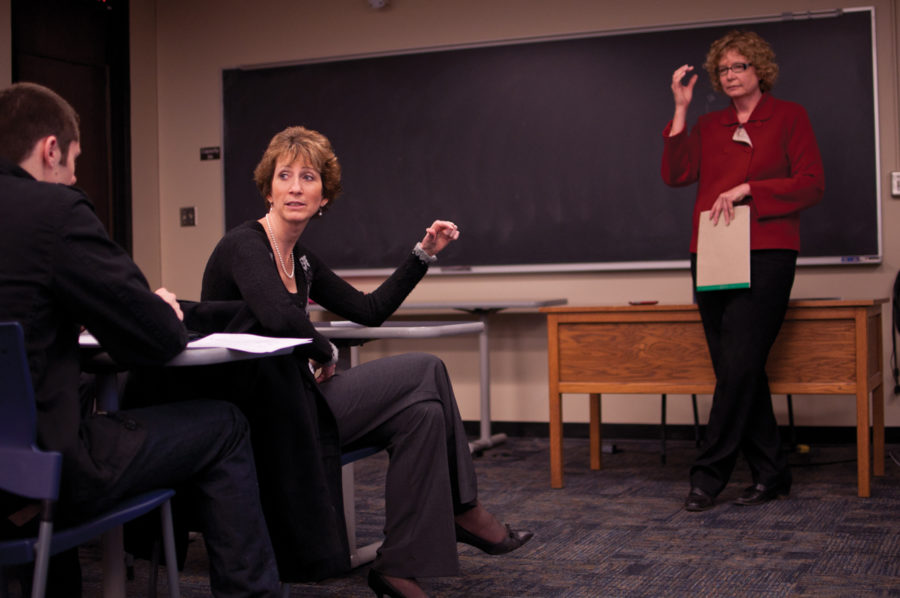 Students will be heading to the Iowa Capitol on Monday and state legislators visited Iowa State on Friday afternoon to share strategic lobbying tips with them.

Kroeschell said to not limit lobbying efforts to Monday.

“I have on constituent that, boy, I know her. She sends me an e-mail probably two or three times a week,” Kroeschell said. “Make sure you follow up on us with the issues.”

Ann McCarthy, state relations officer for Iowa State, shared the “nuts and bolts about what to expect when you get down there.”

McCarthy said one of the first things to do is let the legislators know you appreciate them.

“They have a tough job. Make your point clearly without attacking a person or other people. It is easy to promote yourself by tearing someone else down. That’s not an effective way to lobby,” McCarthy said.

McCarthy said to use the legislator’s website to see who your hometown representative is and to look at pictures to make sure you know whom you’re speaking to.

McCarthy said to make sure to be flexible and patient because “you may not always be able to talk to the legislator you want.”

McCarthy said to try and keep conversation with legislators under five minutes.

Lisa Heddens, the state representative to district 46 which covers the northern half of Ames, Gilbert and Eastern Boone County, reiterated being polite.

“Don’t be confrontational. I’ve had that happen to me,” Heddens said.

Heddens said she did not think she has any committee meetings Monday, but she said to be patient because legislators might be in line to speak or in caucus.

Herman Quirmbach, a senator representing district 23, gave an update on what is happening at the Capitol.

Quirmbach said it became apparent what bills are alive and which are dead because the first bottleneck is done.

He said the bills that weren’t affected by the bottlenecking were appropriations and ways and means bills.

Quirmbach said he has been working with the Government of the Student Body to exempt sales tax from textbooks.

He said the education committee voted on the bill last week, and it was referred to the ways and means committee.

“Each year we take turns whether the House or Senate is going to regulate appropriation bills. This year the education appropriations bill will start in the house,” Quirmbach said.

He said if you have had older brothers or sisters or know people from high school who have gone out of state be sure to tell your legislator that story.

Quirmbach said part of what has helped Iowa get through the recession was the federal stimulus money, but that money is going away.

He said by law the legislature has to run a 1 percent surplus.

“Surpluses by law have to go into reserve funds; the cash reserve and economic emergency funds. That money makes up about 10 percent of our budget,” Quirmbach said.

He said the reserve funds are now filled up to the legal limit.

“Not only are we running surplus, our reserve funding is full. We’re triple-A across the board. No one else has that. They don’t give anything higher than that. We’re in reasonably good shape,” Quirmbach said.

He said if the state level funded everything it would end with the smallest budget gap of the past four years.