Iowa State to challenge No. 20 Aggies 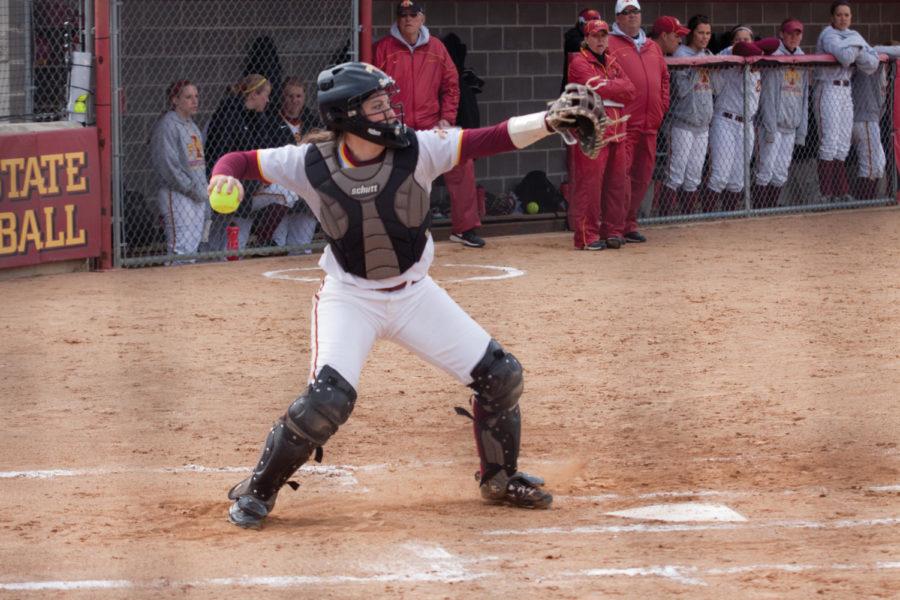 ISU junior catcher Amandine Habben throws a Creighton runner out at second base. Iowa State split the doubleheader with Creighton. The Cyclones played the Bluejays on Thursday in a doubleheader at the Southwest Athletic Complex.

College Station, Texas, is notoriously dangerous for visiting football teams. But in 13 games this season, Texas A&M has dropped every opponent who has set foot on the Aggie diamond.

The No. 20 Aggies have allowed more than one run in only two games played at home this year. Most recently, they defeated No. 15 Baylor, 6-5, at home, just one day after falling to the Bears on the road.

“That’s something everyone likes: the ability to play and perform at home,” said ISU coach Stacy Gemeinhardt-Cesler. “For us, we have to go out and control what we can control.”

Success for the Big 12 stalwarts has come via veteran play and leadership. Aggie coach Jo Evans sets the tone for her squad. In fourteen seasons at the helm, she has won 545 games and maintains a .666 winning percentage.

During her tenure, the Texas A&M has reached the NCAA tournament every year since 2002, including a runner-up finish in 2007.

“[Evans] does a great with them, she’s a phenomenal coach,” Gemeinhardt-Cesler said. “They are always ready to play.”

Five seniors and three juniors lead a seasoned squad in 2011. Senior pitcher/first baseman Rhiannon Kliesing and junior second baseman Natalie Villarreal have started all 36 games for the Aggies and are making the most of their opportunities.

Villarreal has contributed a team-best 32 runs and 37 hits. Her speed also makes her a danger on the base path, as she has been successful on seven of 10 steal attempts.

Kliesing’s .880 slugging percentage and 41 RBI’s are the icing on the cake for her 13 home runs on the season.

Texas A&M brings 11 letterwinners into the game. Conversely, Iowa State needs to incorporate its youth in order to be successful. With only eight players on the roster who are not freshmen, the Cyclones lack of experience could be an issue against the more-experienced foe.

“We always play good games against them, but they are very good,” said pitcher Lauren Kennewell. “They are at the top of the conference right and have a couple very good pitchers.”

Back-to-back losses to Oklahoma State and Northern Iowa may have deterred their momentum, but the team is showing resiliency. It took the front half of a doubleheader from Creighton on Thursday.

Despite losing the second game, the Cyclones showed improvement, led by the big bat of Erica Miller and her three-run blast in the first game.

For Kennewell and teammate Rachel Zabriskie, the trip to Texas will be a homecoming of sorts. Kennewell, from Flower Mound, and Zabriskie, from Austin, will have a chance to play against a few former friends, and foes.

“It’s one of those things where these coaches have seen us play before,” Kennewell said. “I know a lot of girls on a lot of the Texas schools and it always feels good to beat people you know.”

As a Texas native, Kennewell is well aware of the intensity that playing in College Station will bring and how dangerous the Aggies can be.