Wrestlers put win streak on the line at Missouri 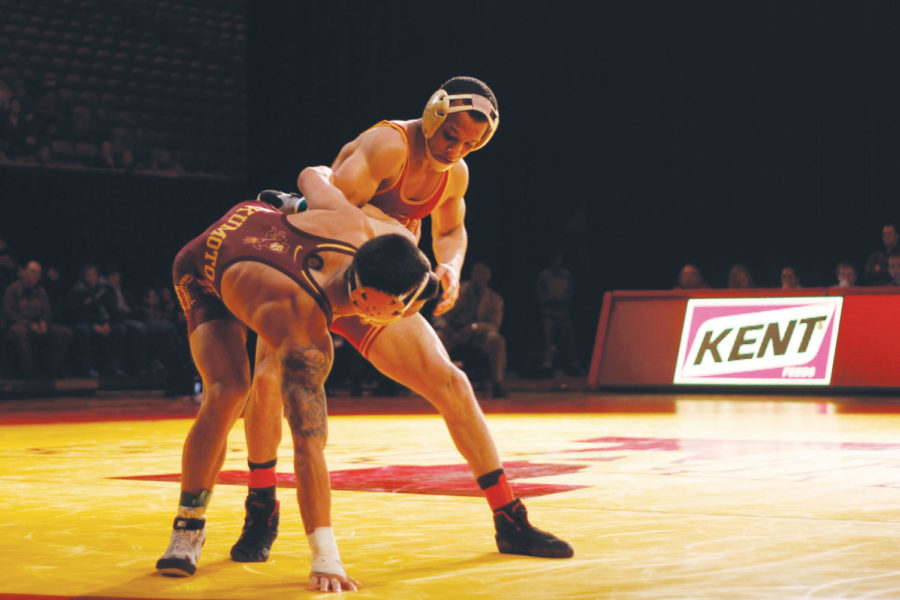 With home duals behind it, the ISU wrestling team will have to take its talents on the road for the remainder of the regular season, beginning this weekend at Missouri.

“It’s a Big 12 opponent so you know they are going to come out and wrestle hard,” said redshirt sophomore Max Mayfield. “Being a conference match, it’s a big one for both of us and I think both of us are going to bring everything we have.”

Since a six-match skid, the Cyclones have turned the corner with a trio of victories over Binghamton, Northern Iowa and Arizona State. Captains Jon Reader and Andrew Sorenson have paced the squad through their recent stretch. No. 1-ranked Reader has extended his season record to 30-0, while Sorenson has maintained his spot in the top 10.

Sorenson, though, is likely to be in one of Sunday’s toughest bouts. The crowd favorite in Ames will have to perform equally well in front of a hostile crowd if he hopes to defeat Missouri’s No. 9 ranked Zach Toal.

“I expect to win,” said Sorenson, who has been battling through a recent ankle injury. “I expect to dominate. My ankle is feeling fine and I just have to keep my hands moving.”

Perhaps the day’s most intriguing match will come at 141 pounds. Iowa State’s All American Chris Drouin will make his long-awaited return to the squared circle against former teammate Todd Schavrien.

Both nationally-ranked wrestlers began their careers at Arizona State University. Schavrien left the Sun Devils in 2008, while Drouin traveled west to Ames following the 2009-2010 season. Their paths crossed again at the Midlands tournament earlier this season, with Drouin edging Schavrien.

Schavrien and Toal are just two of the Tiger’s six nationally ranked wrestlers. The hosts also sport top 20 wrestlers at 125 pounds, 184 pounds, 194 pounds and heavyweight, where Dom Bradley carries the fewest losses on the team with a 22-3 record.

With a strong core leading the way, the Tigers blazed through January, winning five duals in a row. Their victims included Boise State and Oklahoma State, who are both currently top-five teams.

Missouri encountered a roadblock during a double dual trip to Oklahoma. Not only did the Cowboys avenge their loss to Tigers, but the Sooners also edged Missouri by six.

Despite these recent shortcomings, the Cyclones are not taking their opponents lightly.

“We’ve put it on them the last few years and they are looking for vengence,” Sorenson said.

Sunday’s dual will kick off at 1 p.m. in Columbia, Miss.