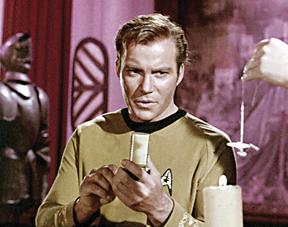 Modern flip-phones share a clamshell shape and some functions with the communicators used by Kirk and his crew in Star Trek.

So I’ll admit it, I’m a geek. I love science fiction, playing video games, computers, science and the obsession included with those hobbies.

The other day, I was watching “Star Trek” with my roommate — “Star Trek Deep Space 9” if you really wanted to know — when one of the characters pulled out their tricorder, or handheld scanner for the non-Trekkie, I realized something.

We as a society have managed to, in essence, “catch up” to “Star Trek” in terms of some of their technology. We have created our own tricorders. They’re called smartphones, and of course I’m kidding, but they’re pretty darn close to the real thing. Hear me out.

So, what does a tricorder do? It scans things, analyzes information and records data. It gives us information we wouldn’t have had otherwise.

Same goes for a smartphone, if not more. Turn on the GPS and you can know right where you are, where others are, and how to get directions to wherever you need to go. All smartphones are Internet enabled, giving you any information about any specimen or culture you may come into contact with, even Hawkeye fans.

A lot of this can be made possible in thanks to an application called Google Goggles. This app allows you to take a picture of almost any landmark, book, art or other item and give’s you information about that item just from the picture of it. Now all you need is to put on a cool Bluetooth headset and you’ve got yourself a combadge to call back to the Enterprise.

The most recent breakthrough has been the concept of translating languages on the fly.

One aspect of the show that many overlook is the idea of the universal translator. When the characters on “Star Trek” came into contact with alien life, they spoke different languages. What you didn’t see was the computer in the background translating the language for both parties to understand and respond — that and it was easier for audiences.

Well guess what? Google has made the universal translator, almost.

The app is called Google Translate, and it has a special speech recognition mode. Simply start up the app, say what you want to say, and it’ll translate it and play it back in the other language. It then gives a second party the chance to respond in their language and Google Translate plays it back for you.

Right now this app only goes from English to Spanish and back, but I can see this catching on, rendering all those foreign language classes you took back in high school useless.

Keep in mind this is just one aspect of that world. We have yet to develop the advanced medicine they claimed to have on “Star Trek,” not to mention our lack of teleportation. However, I don’t think those are necessary in order to attain that level of an enlightened society.

I once overheard someone saying why they liked “Star Trek.” They made no mention of the cool devices or space ships, they said it was because they didn’t have money on the show, you got to do what you wanted for your career in life; you were able to help build a better society and were allowed “to boldly go where no one has gone before.” And I think that’s what it’s all about.

As much of a fantasy world as that may seem, it’s always nice to think that such a day could be near. A day when there is actually world peace, food is “replicated” and you get to carry around a phaser. All we need now is a fleet of warp-capable ships and we’re good go.