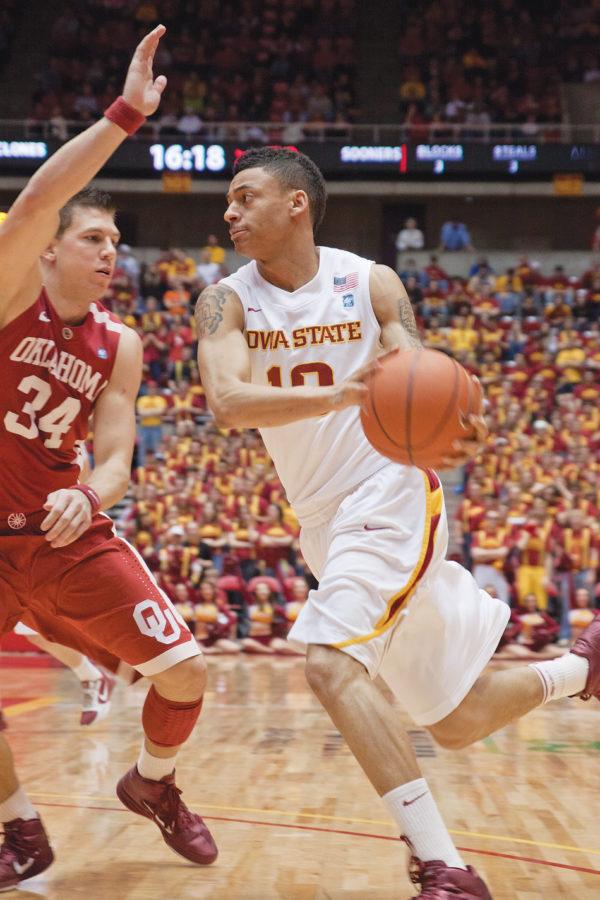 Guard Diante Garrett looks to pass the ball to a teammate during the Iowa State — Oklahoma game Saturday at Hilton Coliseum. Garret helped to lead the team with 18 points despite a 82-76 loss to the Sooners.

It’s unclear what will be thinner Tuesday night in Boulder, Colo., the high mountain air or Iowa State’s bench.

With forward Calvin Godfrey suspended Monday, the Cyclones (14-8, 1-6) are left with just six players that average more than five minutes per game. However, Colorado (14-8, 3-4) is struggling as well, with both teams riding four-game losing streaks.

“We’re not playing complete basketball games right now,” said ISU coach Fred Hoiberg. “You can’t continue digging these holes, we’ve had double digit deficits in all but one league game. It’s tough, especially when you’re as thin as we are.”

It will be the final Big 12 meeting between the two divisional rivals in Boulder with the Buffaloes moving to the Pac-10 Conference next season, but the Cyclones and their experienced coaching staff won’t miss playing in the mountain town.

“I could do it all day, I don’t really get tired,” said senior guard Diante Garrett with a smile. “Even coach Fred said something about it when he went over there to play against the Denver Nuggets, he said it’s a different kind of air. He’s been telling all the freshmen that, that they’ll have to get used to it.”

While Godfrey’s suspension will leave Iowa State even more short-handed than usual, his impact on the stat line reflects Iowa State’s necessity for big nights out of its starters.

“We’ve just got to come out and be the aggressor right away,” Garrett said. “The last few games the other teams have just jumped on us right away and we’re battling and fight back, but it’s kind of hard to do that in the Big 12.”

The Buffaloes and the Cyclones are both under first-year coaches, with Colorado trotting out Tad Boyle and the philosophy change should impact the game itself.

Colorado touts two star guards in senior Cory Higgins and sophomore Alec Burks that make their back-court dangerous in transition. Higgins was the team’s leading score prior to Burks’ arrival, but now the senior puts up 16.2 points per game, just under Burks’ 19.8 point average.

“I think they’re the best back-court duo in the league and also the country, I think both those kids are pros,” Hoiberg said. “Those guys create a tremendous mismatch and match-up problem for us so we’re going to have to go out there and compete and probably junk it up during the game and force them to take contested shots. Hope they have an off night.”

Iowa State has lost five straight games in Boulder and Garrett averages just 6.1 points and 3.3 assists in six career meetings with Colorado. The Cyclones are just 8-23 all-time in the Coors Events Center.

“The big thing I remember from playing in Boulder and then in Denver in the NBA is that it is hard, when you can go out there and blow out your lungs and get a good burn going, it makes it a little bit easier that next day,” Hoiberg said.

Tip off is scheduled for 8 p.m. Tuesday.