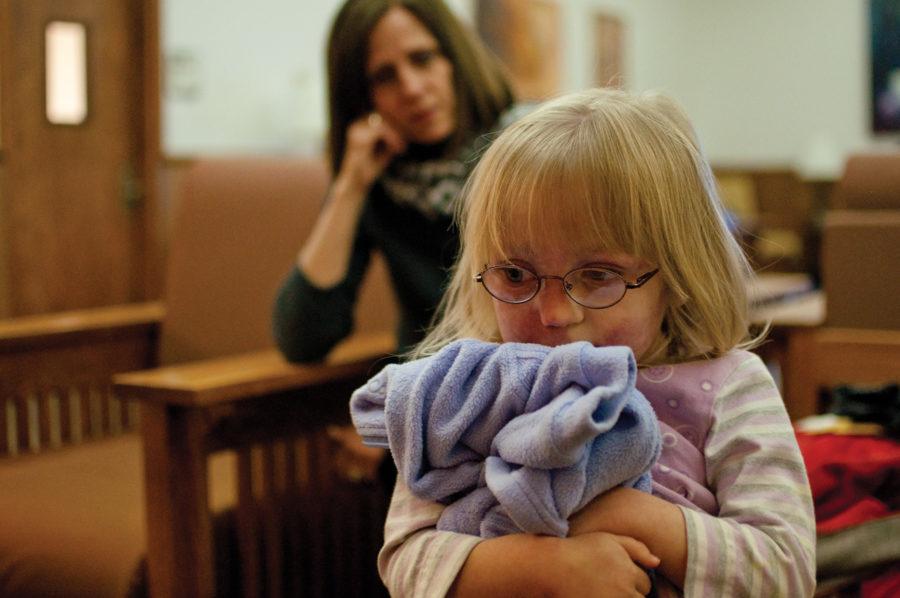 As five-year-old Amy Eyles ran about the lobby of the Memorial Union, the pride in her parents’ eyes was distinct.

With her small round-framed glasses and toothy smile, students could not resist smiling as she ran up to them, only to dodge away at a second’s notice.

For Gary and Judi Eyles, the fact their daughter could bring a smile to others’ faces was remarkable.

At birth, Amy was diagnosed with a disorder known as Sturge-Weber syndrome.

This is a congenital, non-familial disorder, meaning it is formed at birth, but is not inherited, according to the Sturge-Weber Foundation’s website. Its cause and incidence is declared as unknown. People who have Sturge-Weber syndrome often will have a facial birthmark or port-wine stain, as well as neurological abnormalities.

“When Amy was born, the blood vessels in her face and brain did not form and spread the way they were supposed to, which resulted in a purplish, red vascular birthmark on her face, head and neck [which] messed up her brain,” Judi said.

When Amy was first born, she had the characteristic purple birthmark on her face. When this is seen on a newborn baby, the pediatrician will press on the birthmark on the forehead to see if it changes color to determine if blood vessels are the cause.

“Her face was purple like she was choking, but her vitals were normal and everything else was normal,” Judi said.

“It is rare for children to be born with Sturge-Weber Syndrome,” Judi said. “Most children born with it will have neurological damage done to one side of the brain. It is even more rare for them to have the damage on both sides of the brain like Amy.”

When people with Sturge-Weber syndrome only have damage done to one side of the brain, patients can have that side surgically removed in order to stop the seizures.

Because Amy has abnormalities on both sides of her brain, this type of surgery is not possible. This means she must live with the seizures.

Most seizures last from 30 seconds to 2 minutes and do not cause lasting harm, according to the National Institute of Neurological Disorders and Stroke.

This is not the case for Amy. Her seizures are often stroke-like, leaving her paralyzed on one side or the other. These will often occur if she gets sick, especially if she gets a fever. Illness usually brings back-to-back seizures for Amy, that can keep her in the hospital for two to three weeks at a time.

Every time Amy has a seizure, she loses her short-term memory and her motor skills, which she then has to relearn to use.

“We have had several hospital stays at The Children’s Hospital of Iowa,” Judi said. “Amy also sees several specialists at UIHC — a child neurologist, a dermatologist, a pediatric ophthalmologist and a glaucoma specialist.”

During the first two years of her life, Amy had seizures every four-to-six weeks. Her last seizure was a year ago.

“This year’s Dance Marathon marks a record one year since Amy’s last seizure episodes,” Judi said. “She became paralyzed and experienced seizures literally the night before Dance Marathon. [She] had a resulting three-week hospital stay and three months of recovery to get back to normal.”

When the doctors told Gary and Judi their newborn baby girl was at high risk of Sturge-Weber syndrome, Gary immediately went home and began researching the disorder on the Internet.

“We didn’t know what the future would hold for us and for me that was scary,” said Gary.

Later that day he returned to the hospital and told Judi about his findings.

“I was a very emotional mother, especially at that point and the only thing I could think was, ‘Oh my god, she’s going to be a vegetable.’ I felt bad for Amy,” Judi said.

“It varies widely how the syndrome affects people,” Gary said. “Some people get along just fine with it and others can barely function at all. We just want to find out everything we can about it and deal with what comes.”

What the future holds is perhaps the hardest aspect for Amy’s family.

“The first few years are toughest for us, but it’s the future that will be difficult for her as well as us,” Gary said. “Right now she is oblivious to it and isn’t really phased. As she gets older though, she will start to realize its effects and notice people’s reactions to her.”

In most public settings, others’ reactions to Amy’s birthmark vary greatly.

“Other parents who don’t know what Amy has will often shelter their children from Amy thinking she has something like measles,” Judi said. “Other children will ask about her face as will older people. However, there is a huge gap of people who will just stare.”

“When people ask about her, we’re fine with explaining it to them,” Gary said.

“I worry medically,” Judi said. “Those scary moments when she has seizures I wonder, is she going to survive? It’s totally out of the blue.”

Amy is looking forward to attending her first Dance Marathon this weekend.

“She loves dancing and being around people,” Judi said.

“As a staff member of Iowa State, I was familiar with the organization, but I never realized it was a year-round thing until we joined,” Judi said. “At the University of Iowa Children’s Hospital, they have donated so much in regards to rehabilitative equipment, and they donated a well-stocked toy room there as well. It’s great how they hold events throughout the year for the children and their families as well.”

Amy loves attending the events and playing with other children.

“Watching her progress and get so far developmentally, it is so joyful to see she’s capable of doing so much,” Judi said. “Everybody makes compensations and we have a tremendous support system. We don’t get bogged down.”