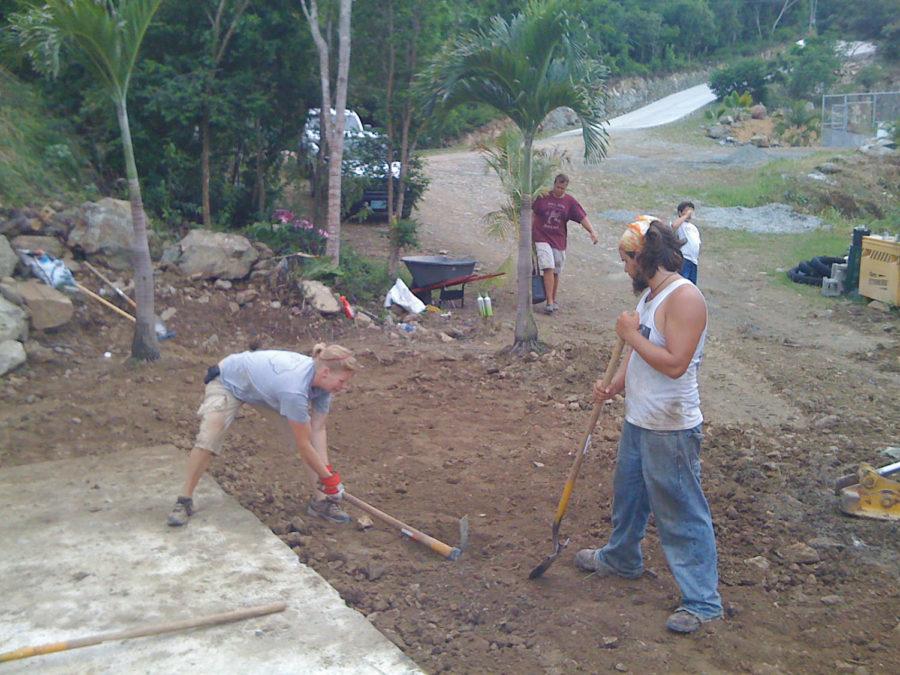 Education and Resiliency Through Horticulture, otherwise known as EARTH, is a year-old program funded by a donor to the College of Agriculture.

The program takes a handful of ISU students each semester down to the Virgin Islands, St. John, to educate food production to the students of Gifft Hill, a K-12 school.

“There is a donor to the College of Agriculture who has been donating to Iowa State for years,” said Michael Reinert, assistant professor of horticulture. “He donates for other programs and lives down in this little school on St. John as well and wanted to find a way to put together these two programs, Iowa State and [Gifft Hill]. Through discussions through the Iowa State foundation, [they] came up with some initial ideas of how to potentially do that.

“This donor also wanted to build a sports field for the school, so he contacted ISU for help, which resulted with one of my colleagues designing the field. The school was so happy with the field, and the cooperation that the idea of trying to put the two schools together, led to the idea that we could bring Iowa State and Gifft together through horticulture,” he said.

St. John is an island with no flatland; its soils, which primarily consist of soft bedrock, can’t sustain the crops grown here in Iowa.

“The origins of the island are volcanic,” said Kevin Duerfeldt, graduate in horticulture, “So it’s volcanic material and uplift from the ocean floor, and then after it rose up out of the ocean, the rocks started decomposing and soils started to form. Since the island is so young, there’s just a thin layer of what we would call bedrock, soft bedrock.”

“There’s about eight inches of top soil; it’s very old, decomposed clays and there’s not very much organic matter in the soil, and after that eight inches, it’s solid bedrock all the way down,” said Winston Beck, senior and one of the first students to participate in EARTH.

Reinert and a handful of students flew over St. John to do an expedition of what needed to be done. The group outlined a program for EARTH that exists today.

Because everything is imported to the island, including food, Reinert’s goal for the program is to teach the students about food production and the nutritional value of fruits and vegetables.

“Taking students who were uninformed about their general surroundings and giving them a better understanding of what’s happening and focusing on biological science in that capacity is the educational aspect,” Beck said. “It’s also the education of growing the fruits and vegetables, what’s required for the growth, plant biology, soil nutrient quality, all these different environmental qualities come behind the science of it.”

For ISU students, Reinert stresses a service learning opportunity, which can provide up to 12 credit hours for students who participate.

“[ISU students are] providing a service, which is building projects and constructing, growing places for plants, but also learning in that, [ISU students] have the opportunity to learn a new culture and see food growing in a different setting and teaching classrooms and learn from that,” Reinert said.

Students will earn one credit for each week of the trip, which typically lasts 12 weeks. Currently the credits are horticulture/elective credits, but Reinert encourages more students from different departments and colleges to apply.

“We can work with their department or college to see if some those credits can come through their college,” Reinert said.

EARTH has already made significant progress with the island including completely renovating the school’s barren porch to a garden filled with growing produce and creating a synthetic turf soccer field for the students to play.

“Watching the produce growing excites the students, it encourages students to eat the produce,” Reinert said.

“We have teachers telling us some of the students get to school early now to run out on the porch just to check out the plants and document which ones need water, which ones have an insect problem. They put sticky notes on our office before we even get in, in the morning to tell us what needs to be done,” he said.

Another objective EARTH hopes to accomplish is to bring prospective students from the Virgin Islands to Iowa State.

“It’s a way to introduce their students to Iowa State,” Reinert said. “One of the things that our students do there because they’re ag students typcially is they know how to physically work very hard, and so their students see these college students not only working with their brains, but working physically.”

“That’s a really good message that the school’s really happy that we send that we are intellectuals, but we work,” he said.

The program hopes to initiate a composting program to help create fertile soils towards food production for the following semesters.

“One of the main things that we’re looking at to build their soils is composting; there’s not a lot of composting on the island right now, but there’s a lot of material that could be used for composting, and currently it’s shipped to one of the other Virgin Islands where it is thrown into a landfill without being compressed or anything,” Duerfeldt said.

“We are conducting research about the program to try to aide in developing other programs like this. For the undergraduates, it’s about the experience, but we have graduate students involved and faculty involved, where it’s about teaching but also about our own research and documenting what’s happening so that other researchers can learn and other programs can learn to try and duplicate or at least pull in parts of the pieces that we did somewhere else,” Reinert said.