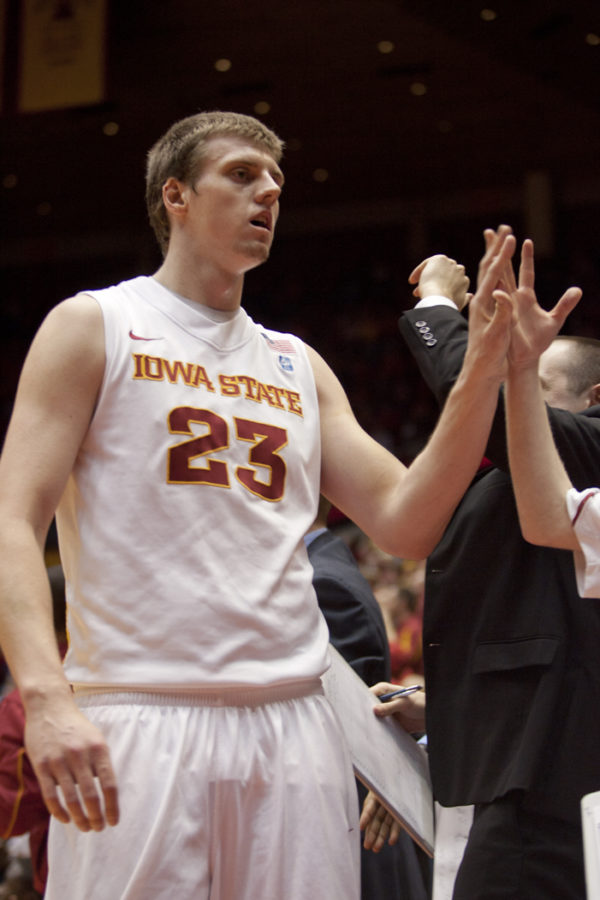 Forward Jamie Vanderbeken gives his teammates a high five as he comes off the court during the second half. Vanderbeken lead the team in scoring with a total of 21 points.

Wednesday night, Iowa State will try to end a 15-game losing streak, dating back to March of 1988, when it takes on Oklahoma State inside Gallagher-Iba Arena in Stillwater.

In Moses, Hoiberg said the Cowboys have a “big, strong body” that the Cyclones will try to confuse with different looks on the defensive end.

“They’re a big, strong, tough team,” Hoiberg said. “We need to try and go out there and play with poise.”

The Cyclones are coming off of an impressive win against Baylor on Saturday and won against the Cowboys during the 2009-2010 season.

The teams are different than last season’s matchup, though, and the 2010 NCAA Tournament qualifier hasn’t fallen at home in 2010-2011.

“It’s going to be a big-time challenge for us,” said ISU guard Scott Christopherson, who led Iowa State with 19 points in last season’s 69-65 win over the Cowboys. “Oklahoma State is going to have some runs and their crowd is going to get into it.”

Third-year OSU coach Travis Ford has a team that is struggling in many statistical categories, despite the presence of Moses and guard Keiton Page, who scores 13.9 points per game. The Cowboys are 10th in the Big 12 in scoring offense, rebounding and turnover margin, contributing to their early-season struggles in conference play.

Meanwhile, Hoiberg’s bunch have looked impressive through its first three conference tests, losing the first two contests by a combined six points before the 15-point win over Baylor on Saturday.

Wednesday night’s game will be only the second conference game to be played away from Hilton Coliseum early into the Cyclones’ Big 12 schedule before they play at Missouri on Saturday. Iowa State is 3-2 away from Hilton this season.

“We’ve gone on the road and played well before, so I think we’re capable.” Christopherson said. “We’re going to have our hands full.”