Beauty and the Beast fills seats for gymnastics 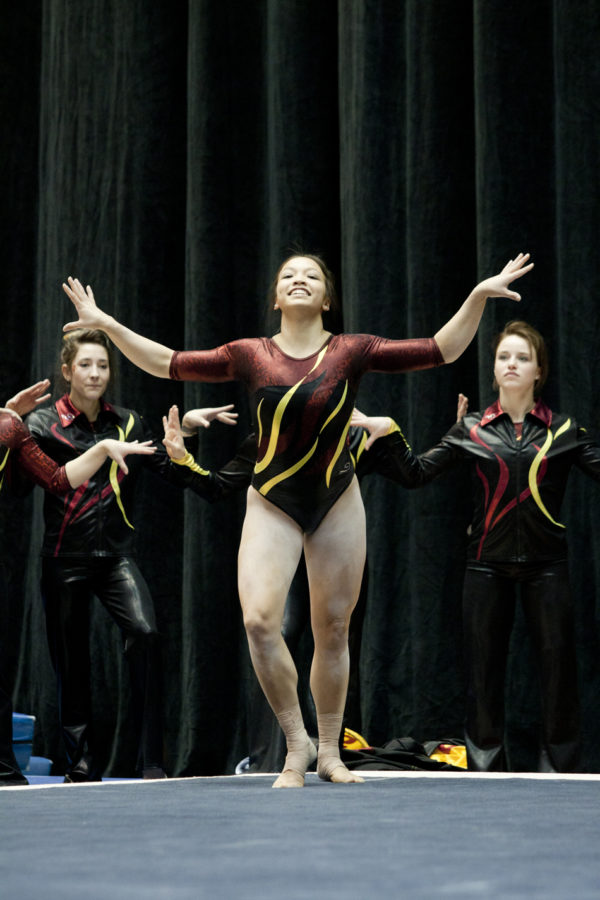 Mixing intense and informed wrestling fans with the supportive knowledgable fans of gymnastics is a great combination for the athletes at Friday’s “Beauty and the Beast” dual-event.

With large muscles, spandex uniforms and loud cheers coming from both ends of Hilton Coliseum, the ISU gymnastics team is just hoping the boost in support becomes a boost in score.

“Beauty and the Beast is one of the most exciting events I’ve ever experienced,” said senior Jacquelyn Holmes. “It’s just so amazing because there are so many fans that come out for both wrestling and gymnastics. They’re just all in one together.”

The “Beauty and the Beast” event draws in record crowds to watch the traditionally strong Cyclone wrestling team, but few spectators even know about an ISU gymnastics program that is growing and has rich history itself.

Coach Jay Ronayne has had the Cyclones in the Top 25 consistently in the last three seasons, and the gymnasts just hope they can hold onto support they receive co-headlining with the ISU wrestlers.

“It’s fun for us, because we really like getting the crowd in there,” said top all-around performer Michelle Browning. “It’s such a bigger crowd than we’re normally used to, it gives us some adrenaline and reason to perform.”

The No. 21 Cyclones (1-1) took a boost in the rankings despite losing to Nebraska last week, posting a season high 194.725. The score was a 1.250 point boost from week one, a pace they likely won’t be able to maintain but is a goal until the squad is scoring consistently around 196.000.

“I feel like once you get to those really high numbers, almost reaching that goal of perfection, it’s hard to jump from there,” Holmes said. “But from here, we can just keep jumping up points and points.”

Last season, Missouri brought out some of Iowa State’s best gymnastics. In the third meet of the 2009-2010 season, the Cyclones traveled to Columbia, Mo., and posted a 196.000.

To get that kind of effort and feed off of the crowd that will undoubtedly be the largest ISU gymnastics performs in front of all season will likely produce great things.

“The atmosphere is just so energetic, and there are just so many [ISU] fans that it just has that energy,” Browning said.

In 2008, 7,224 fans saw the “Beauty and the Beast” event, easily the largest crowd to ever see an ISU gymnastics meet.

With all the action going on from both ends of Hilton Coliseum, the gymnasts insist their music and moves won’t get lost in the shuffle.

“We’re just focused on doing our gymnastics,” Holmes said. “It’s just so many things going on at the same time that it’s so hard to just keep your eye on one thing.”

“Beauty and the Beast” will begin at 7 p.m., with the wrestlers on the east end of Hilton Coliseum, the gymnastics set up toward the west, and the runway for the vault stretching down a sideline by both setups.

This will be last home gymnastics meet for the Cyclones until Feb. 11.