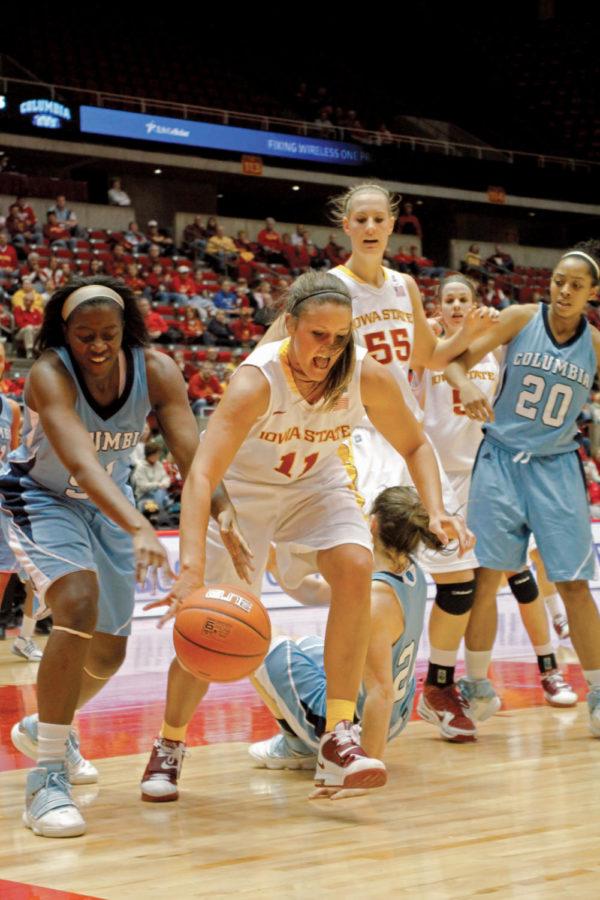 Guard Kelsey Bolte rushes to keep the ball from Columbia opponents during the game on Sunday at Hilton Coliseum. Bolte went 4-11 on field goals and five rebounds and 11 points to help the Cyclones defeat the Lions 73-27.

Iowa State spent plenty of time leading their opponents over the holiday break. From 13:02 left in their Dec. 12 game against Columbia, the Cyclones were ahead of their opponents every minute of each of their five consecutive home wins.

Not until Iowa State faced the No. 1 Baylor Bears did the Cyclones trail on the scoreboard, falling to a 16-0 deficit early in the game. The Cyclones were unable to continue their win streak as they lost 70-58 in their Big 12 opener.

The Bears, who took over the No. 1 ranking after Stanford ended Connecticut’s 90-game win streak, jumped out to a 16-0 lead as they held the Cyclones scoreless for the first 7:55 of the game. The Cyclones trailed 34-22 at halftime and were able to cut the lead down to seven. But the efficient Baylor offense would be too much as the Bears made 52.2 percent of their second-half shots on their way to the 70-58 victory.

Preseason Big 12 Player of the Year Brittney Griner used her 6-foot-8-inch frame to control the post as she led all scorers with 25 points. ISU senior guard Kelsey Bolte ended with 21 points and sophomore center Anna Prins chipped in with 15.

Before traveling to Waco, the Cyclones ended their non-conference season on a six-game winning streak that 45,658 fans were able to see at Hilton Coliseum.

ISU coach Bill Fennelly said the first game after finals was always one that scared him, but his team did not disappoint as it took a 51-15 halftime lead en route to a 93-47 victory over winless Cal State Northridge. Junior point guard Lauren Mansfield helped balance the Cyclones’ scoring with 10 assists as Bolte led four Cyclones in double figures, finishing with 16 points.

The Cyclones had nine days off before hosting the Cyclone Challenge as East Carolina, Florida A&M and Prairie View A&M converged on Hilton Coliseum for the two-day tournament. Bolte, the Big 12 leader in 3-point field goal percentage this season, drained a season-high seven 3-pointers and finished with a career-high 28 as the Cyclones downed Florida A&M 85-60. Mansfield dished out 10 assists for the second consecutive game and added eight points for Iowa State.

The Cyclones next squared off against Prairie View A&M and looked poised for their 56th consecutive non-conference home victory as they jumped out to a 36-20 lead. However, a resilient Panthers squad trimmed the team’s lead to one with two minutes to play. But a three-point play by sophomore forward Chelsea Poppens with 1:05 left gave the Cyclones a 56-50 advantage, and a pair of free throws from Kelsey Bolte sealed a 58-50 victory for Iowa State.

Poppens had her first double-double of the season as the Aplington native scored 18 points and pulled down 15 rebounds. Freshman forward Hallie Christofferson chipped in with 12 points, all scored in the first half, and Bolte added eight. Bolte was named the Cyclone Challenge’s Most Valuable Player, and Poppens was named to the all-tournament team.

Holding teams to the second-lowest field goal percentage in the Big 12, the Cyclones used a stout defensive effort to contain a high-scoring Chicago State team in a 62-48 victory over the Cougars. Iowa State held the Cougars, who averaged 69.8 points per game, to 31.7 percent (19-for-60) shooting from the field and a season-low 48 points. Poppens and Christofferson shot a combined 13-for-21 from the field as each poured in 17 points.

The Cyclones wrapped up their non-conference schedule with an 80-51 rout of visiting North Dakota State. Prins had her best game of the season as she led Iowa State in points and rebounds with 22 and nine, respectively. The Cyclones dominated the glass as they out-rebounded the Bison 52-20.