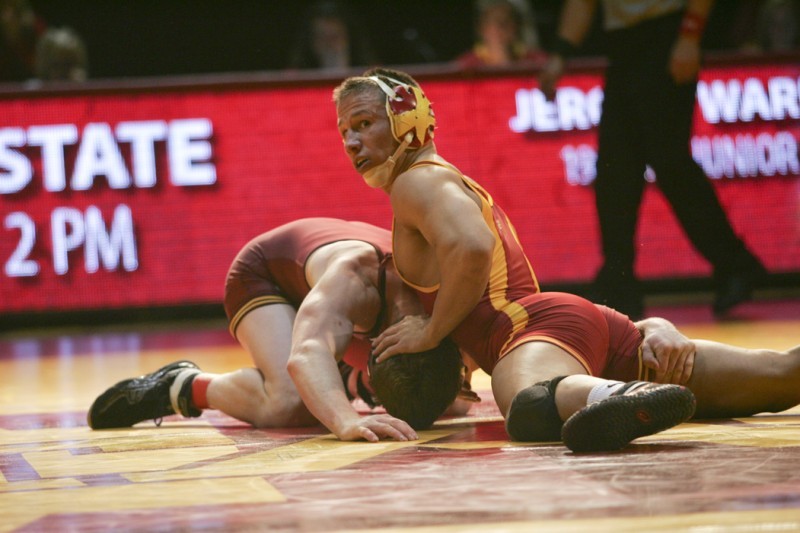 Freshman Trent Weatherman wrestles Minnesota's Joe Gyrgelko during the meet on Sunday, Jan. 16. Iowa State lost to Minnesota with a score of 13-26.

The collective breath of those in attendance at Hilton Coliseum on Friday was held as Trent Weatherman lay unconscious on the mat after getting pinned in his match against Oklahoma’s Chase Nelson.

“It looks to me like he was choked unconscious,” said ISU coach Kevin Jackson. “They caught it real late and I’m sure he probably was unconscious during the whole time.”

Weatherman had been fighting a hold and eventually got choked out, which lead to him becoming unconscious. Jackson said by the time the team doctors noticed that Weatherman was not responsive, some time had already passed.

“If you get laid on your back it’s a real concern when you lay on your back that long and you don’t move, then you get a bit nervous,” Jackson said.

While he was lying on the mat, the medical officials evaluated Weatherman by asking him what his name was, what day it was and what year it was, all of which Weatherman answered correctly. However, Jackson says he still was not himself.

“He was responsive in that way, but he wasn’t normal and he wasn’t himself and that’s for sure,” Jackson said.

The team doctors were not made available for comment.