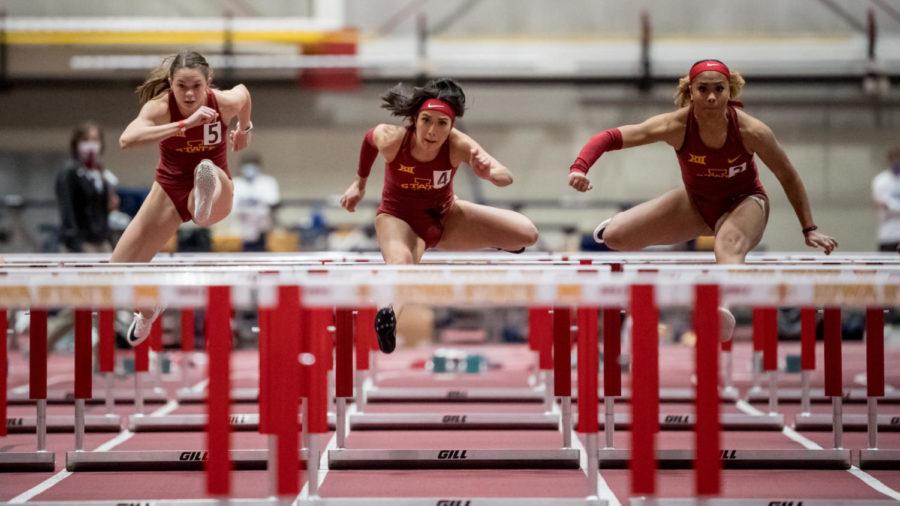 Iowa State track and field’s opening day of action at the Sun Angel Classic on Friday was dominated by the sprinting and hurdling events, as the Cyclones produced eight total personal bests across the board.

The competition at times included some of the best talent in the nation, as the Cyclones competed against athletes from Arizona State, Kansas and BYU.

Much like the opening meets two weeks ago, Friday’s action was highlighted by the Cyclone women, who led the way in a multitude of events on both the track and field to finish with a handful of personal bests and program-leading performances.

The highlight on the track for the Cyclones on Friday was the Canadian pair of Kaylyn Hall and Katarina Vlahovic, both of whom lowered their personal best times in the women’s 100m hurdles preliminaries.

Hall entered this weekend’s meet coming off a strong opening to the outdoor season, as she bested her top times in both the 400m and 100m hurdles at the Bobcat Invite to finish first and second respectively.

Vlahovic was not as successful, however, as she was disqualified in her heat for the 100m hurdles.

Vlahovic made up for that performance on Friday when she finished second in her heat, crossing the line in a time of 13.47 seconds to break her previous top time by nine one-hundredths of a second.

She lost out in the race to another Canadian and former Cyclone, Keira Christie-Galloway. Christie-Galloway, who now competes for Arizona State, ran a time of 13.46 seconds to book her place in the final, which will feature the nine-fastest athletes from Friday’s action.

Hall joined Vlahovic in the final, when she recorded a time of 13.29 seconds to also take second in her heat. Hall and Vlahovic’s times are now the second and fourth fastest times, in Iowa State history, as they are the newest additions to that list.

Coincidentally, Christie-Galloway is the only athlete ahead of Hall on the program’s leaderboard, as she set the school record of 13.10 seconds en route to winning the 2019 Big 12 Championship.

Vlahovic’s day still wasn’t done however, as she took down another personal record in the 200m dash by recording a time of 24.59 seconds to win her heat and finish 10th overall.

Vlahovic’s time is now also the 10th-fastest in program history, as she overtook Kianna Elahi’s 2011 mark of 24.60.

Bria Barnes also scored a PR in the 200m, as she finished second behind Vlahovic in 24.72 seconds. Barnes will also be competing in the 400m dash on Saturday.

Just like Hall on the track, senior Emily March began right where she left off in the women’s discus from the Bobcat Invite by finishing third on Friday.

March, who currently holds the school record in the event at 191 feet and two inches, went toe-to-toe with two world-class throwers in Jorinde Van Klinken and Alexandra Emilianov of Arizona State and Kansas respectively.

Van Klinken is the current Dutch record-holder in the discus with a throw of 70.22 meters (230.4 feet), and also finished 14th at the Olympic Games in Tokyo last year. Emilianov meanwhile won the 2018 U20 World Championship title and also competed in Tokyo last summer, as well as being a two-time Big 12 Champion in the event.

March showed consistency in the competition, as she threw for at least 185 feet on all four of her legal throws, fouling on her third and fourth attempts of the competition.

That distance is far beyond the second-best mark in Iowa State history, which is Susan Sherman’s 2003 throw of 176 feet, five inches.

March’s best mark of the day came on her final throw, as she launched the disc in round six for a distance of 188 feet, two inches to take the bronze medal. Van Klinken took first place with a mark of 204 feet, eight inches, while Emilianov beat out March at 193 feet, three inches in what could very well be a preview of the Big 12 Championships next month.

Van Klinken, Emilianov and March are now all among the best in the country this season, as their top throws from Friday’s competition are now the first, second and sixth best marks nationally.

Elsewhere in the field events for the Cyclone women, Antonella Creazzola led an Iowa State trio in the hammer throw, breaking her personal best and finish fifth overall with a throw of 193 feet, five inches.

Creazzola’s mark is now the seventh-best in program history, as she beat her old mark by nearly seven feet. The mark ranks her ahead of Kris Curnyn, who produced a throw of 191 feet, 11 inches at the 1998 Big 12 Championships.

Like March, Creazzola’s top mark of the day came on her last attempt, as her previous four throws hovered in the range of 188 to 192 feet.

March followed her teammate by also breaking her PR with a throw of 179 feet, nine inches to top her best mark from the Bobcat Invite two weeks ago by over a foot.

Freshman Danielle Hoyle competed the hat-trick of personal bests for Iowa State, when she finished 15th with a best throw of 158 feet, 5 inches. Hoyle’s first collegiate outdoor meet was relatively quiet, as she finished 15th in the hammer at the Bobcat Invite behind March and Creazzola.