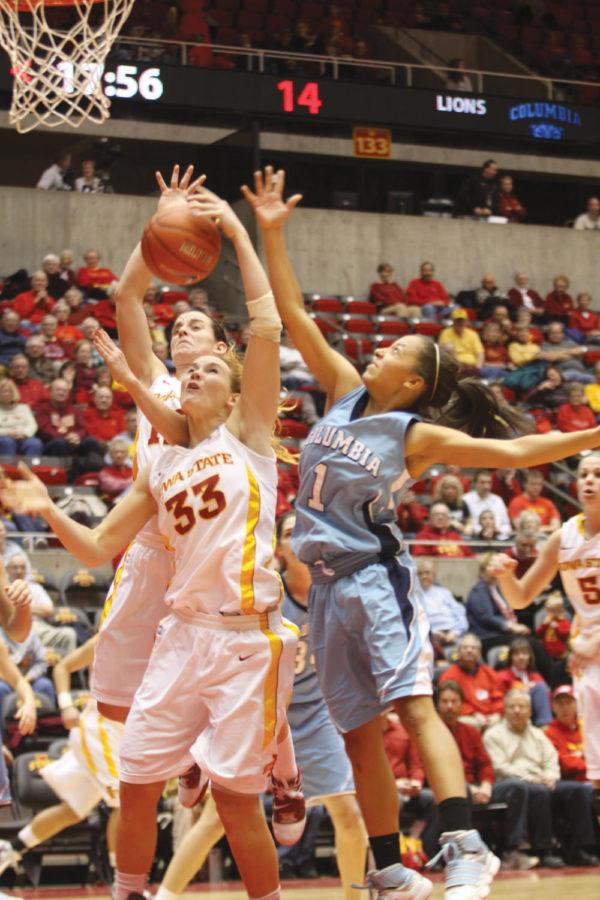 Forward Chelsea Poppens, guard/forward Jessica Schroll and Columbia's Taylor Ward fight for a rebound during the second half of the Iowa State-Columbia game at Hilton Coliseum. Poppens' nine rebounds and Schroll's six rebound helped the Cyclones to defeat the Lions 73-27.

Just three days removed from scoring a season-low 40 points in a 22-point loss to rival Iowa, the Cyclones posted their season-high on the scoreboard in a 73-29 rout of the Columbia Lions.

“It was certainly a game that allows everyone to walk out smiling, everyone got to play and a game that at least we got back out and played [following the Iowa loss],” said ISU coach Bill Fennelly.

Averaging a Big 12-low 59.2 points per game on the year, the Cyclones (7-2) shot 52.1 percent from the field and exceeded 70 points for the first time on the season in their first-ever matchup with Columbia (0-9).

“[The Iowa game] definitely showed us that us postees need to be stronger and come together and make the little plays, the easy plays first,” Poppens said.

Prins led all scorers with 14 points and added 10 rebounds while Poppens nearly logged her first double-double of the season finishing with eight points and nine boards.

“In the beginning we were a bit shaky but through like the end of the first half and [into] the second half I think we came together,” Poppens said.

The winless Lions jumped out to a 9-4 lead before the Cyclones went on a 8-0 run to regain the lead. Columbia’s Melissa Shafer knocked down a three-pointer with 12:08 left in the first half to tie the game at 12-12 but the Cyclones defense would be the story for the next 11 minutes. Iowa State scored the next twelve points and held the Lions scoreless until the last 25 seconds as they went into the locker room with a 31-14 lead. The Cyclones were able to get their first look at dealing with some full court pressure this season with Columbia guarding them down the entire floor.

“It gave us something else to look at and that’s what you want with these games is something different, we hadn’t seen a [team] run and jump all year,” Fennelly said.

A trio of early three-pointers from sophomore guard Jessica Schroll, freshman guard Kelsey Harris and senior guard Kelsey Bolte helped the Cyclones pull away as they outscored the Lions by 29 points in the second half.

The Lions shot a paltry 16.1 percent from the field and made only five of their 25 shots from beyond the arc. Leading Columbia was Shafer who netted three three-point shots on her way to an 11-point game.

The Cyclones will get to take three days off from practice after facing plenty of adversity this week. Numerous players and staff faced flu-like symptoms after the Iowa game and junior guard Darcie Dick announced that she would be transferring at semester’s end.

“You have to move on, you can’t keep looking back and I know now we have a clear slate going into finals,” Christofferson said.