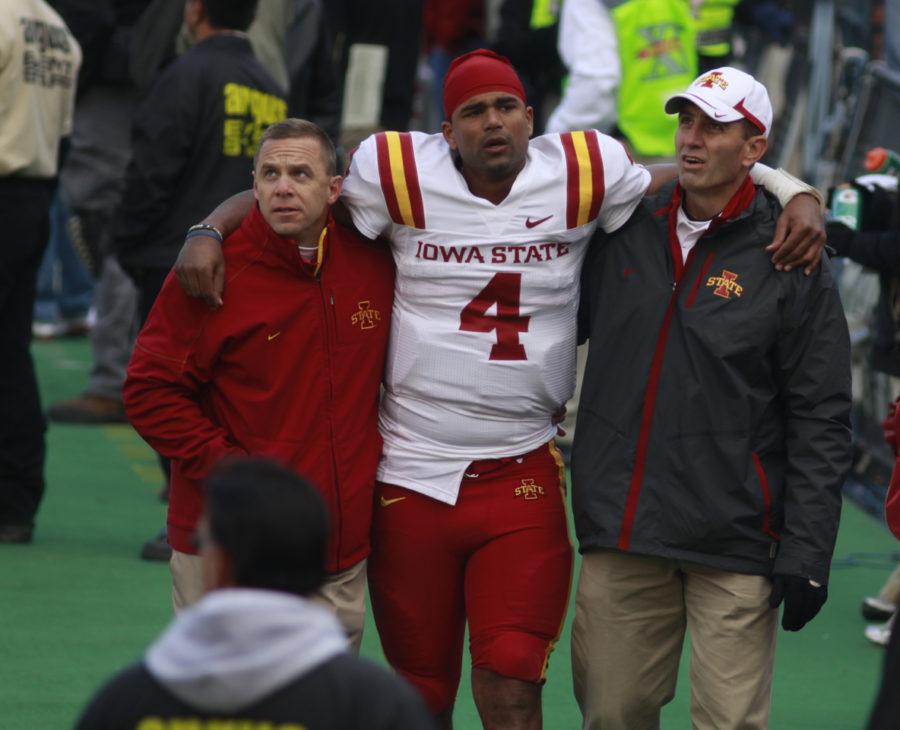 ISU quarterback is helped toward the locker room near the end of Iowa State's 34-14 loss to Colorado on Saturday. Arnaud injured his knee during the fourth quarter of the game, and team doctors believe it will keep him out for the remainder of the season.

Minutes before, Austen Arnaud gingerly limped his way into the ISU locker room with the help of two assistant coaches. On the way up the hill, he stopped and hugged family members.

His coach found out the news from team doctors before he left the locker room. The quarterback’s knee was “loose,” the injury severe. Arnaud’s season and career as the ISU signal caller were likely over.

“I had to walk back in there and give him a big hug,” Rhoads said. “He’s just devastated.”

During the fourth quarter of Iowa State’s 34-14 loss to Colorado on Saturday, Arnaud was sacked, got his legs twisted around themselves, leaving him crumpled on the field, motionless and in pain.

On the play, Arnaud fumbled the ball away, and it appeared that he just let go. Rhoads thought the pain was too much and Arnaud couldn’t hang on.

No one knew at the time that it might be the final time he was on the field after being the program’s starter for three years.

“He’s given his heart and soul to this program,” Rhoads said. “He did it today — he was playing on a badly sprained ankle today — and your heart just goes out to the young man.”

Arnaud was 15-of-23 on Saturday and accounted for 136 yards through the air. He ran the ball four times for eight yards, but was sacked five times, including his final play, dropping his rushing total to -26 yards.

For his career, Arnaud will end up as the second-leading passer in ISU history with 6,777 yards, 2,722 yards behind Bret Meyer, a four-year starter that Arnaud played behind during his freshman season. He is also second all-time in passing touchdowns, completions and total offense.

The Ames native will also end his career as the all-time leader in completion percentage, completing 59.7 percent of his passes.

“I feel for him,” said safety Michael O’Connell, Arnaud’s roommate for their entire five-year term in Ames. “I told him that through this entire process I’ll be there with him every step of the way.

“That’s how this whole team is. Our team is going to wrap our arms around him and love him up because he’s family. He’s a brother.”

Arnaud’s teammates were quick to stand beside him and send support his way. Now, they’ll have to move on without him, while also helping him move on from this.

“Right now isn’t necessarily the time for him to learn from this,” O’Connell said, “but as time goes on, he’ll get something out of this. He’ll become a stronger person.”

Arnaud wasn’t available for comment following the game, and his soon-to-be replacement, sophomore Jerome Tiller, declined to do so upon exiting the locker room.

Tiller finished the game for Arnaud, completing 12 of his 19 pass attempts for 99 yards, including a 24-yard touchdown to Collin Franklin with 8:11 left in the game.

The San Antonio, Texas, native is most known for leading the Cyclones in their 9-7 win over Nebraska last season, and he has played behind Arnaud for his first two seasons in Ames.

“It’ll be the same as any other game,” said offensive lineman Alex Alvarez. “He’s a quarterback, he’s played with us and he understands the system.”

Now, he’ll be the starter for the Cyclones against Missouri next weekend, senior night in Ames. With a win, Iowa State will finish the season 6-6, and become bowl eligible for the second straight season.

However, team doctors told Rhoads that even if the Cyclones are playing football in December, their senior leader and the face of the program may not be on the field with them. Rhoads said Sunday night that Arnaud will undergo an MRI on Monday morning. Doctors think that both Arnaud’s ACL and MCL may have been damaged.

“They think he’ll be done, even if we went to a bowl game,” Rhoads said. “We’ll wait and see until we get clarity from the testing.”