Hunter Dekkers: Getting into the groove 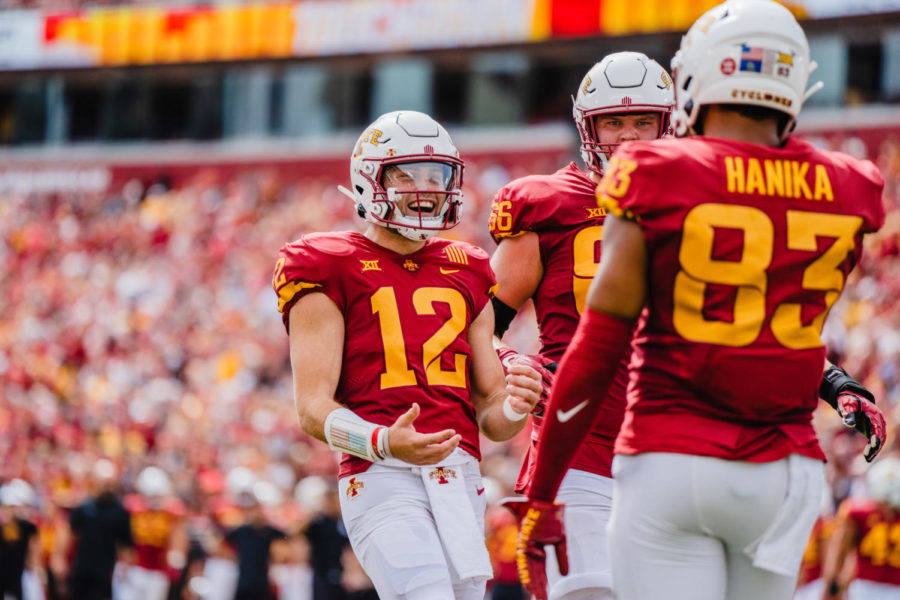 Hunter Dekkers smiles to teammate DeShawn Hanika after a touchdown against Ohio on Sept. 17

AMES — In perfect timing, the rain stopped and held off for the Cyclones Saturday afternoon as they looked for their third consecutive win of the season; something that had not occurred since 2012.

Captains for the 1 p.m. kickoff were defensive back Anthony Johnson Jr., wide receiver Xavier Hutchinson, linebacker O’Rien Vance and offensive lineman Trevor Downing. All four players contributed exponentially to the 43-10 win over the Ohio Bobcats. Nonetheless, it was Hutchinson who seemed to lead the pack.

The connection between quarterback Hunter Dekkers and Hutchinson stood out once again and was found right away. On the first two drives of the game, Dekkers immediately found Hutchinson for a total of 14 yards in two plays.

The Cyclones went 69 yards on the opening drive and with only five minutes in came the first of many touchdowns for Iowa State. This one by Dekkers himself for six-yards.

Dekkers had been slower on running the ball in previous games while this was his first touchdown of the season on his own.

“There are some critical plays that he makes in the football game that we’re not the team we’ve got the ability to be if he doesn’t make those plays,” head coach Matt Campbell said.

Campbell said Dekkers confidence and resiliency is something that keeps the team “rallying around him.”

Dekkers found a variety of teammates this time around with Hutchinson only scoring one touchdown. However, Hutchinson became the eighth player in Iowa State history to receive 2,000 receiving yards.

Additionally, Hutchinson’s touchdown became his fifth of the season so far. Hutchinson only had five touchdowns all of last season. Hutchinson had nine catches for 93 yards.

Wide receiver Sean Shaw matched his career high of five receptions after a 15-yard touchdown along with his first touchdown of the season.

“It was Hunter [Dekkers] giving me a chance and I went for it,” Shaw said.

This is Shaw’s first time being healthy in three years and had not had a real off season until January.

Shaw reflected on his gratefulness for finally being healthy and being able to go out and have fun playing the game.

Dekkers stayed fairly consistent on his passing percentage finishing with 28 catches of 36 attempts along with 268 yards.

Second string quarterback Rocco Becht took over for Dekker with 12 minutes remaining. The Cyclones then put in Ashton Cook. Although Becht was 0-2 on catches and attempts and had two rushing yards, Cook was 4-4 with 32 passing yards.

Jirehl Brock did not score a touchdown over the Bobcats however the 220-lb running back had a career best of 61 rushing yards in a single play. With that, he ran for a total of 76 yards along with 22 receiving yards and four catches.

Although touchdowns are great, so is special teams. True freshman Jace Gilbert is 13-for-14 on kick attempts this season. What kept Gilbert from perfection was a blocked kick from Ohio.

The Oklahoma native took over the spot of alum Andrew Mevis who made a strong impact on the Iowa State team after posting a perfect point after touchdown (PAT) percentage and going 20-23 in field goals. Nonetheless, Gilbert received a career best of 39-yards along with going 3-3 in field goal attempts.

“We’re showing up ready to rock and roll,” Campbell said.