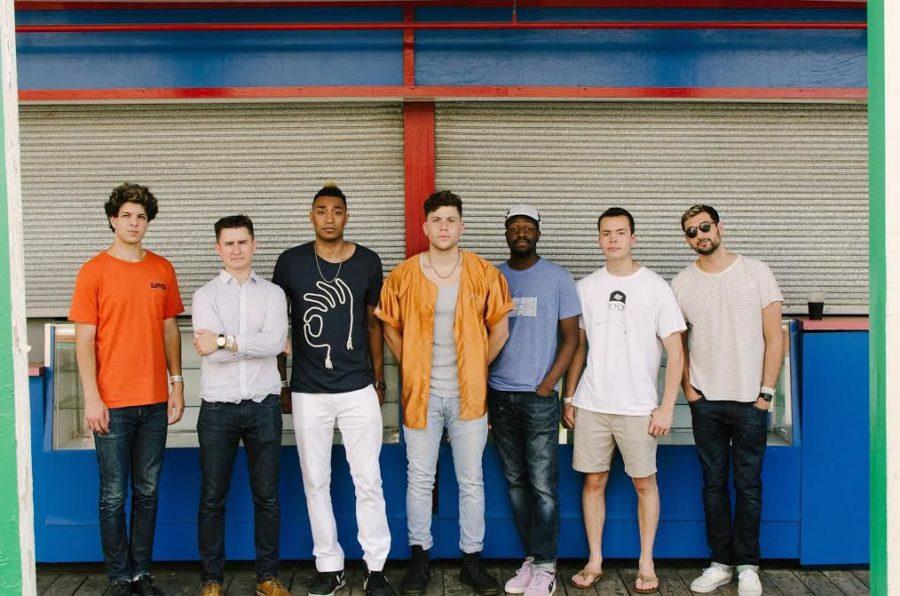 The members in Juice all have different backgrounds in music that contribute to their unique sound.

The concert starts at 7:30 p.m. with opener Juice, a band whose sound combines R&B, rock and hip-hop with the personalities of its seven members.

According to Rami El-Abidin, a member of Juice, the band formed during the seven members freshman year at Boston College. They started taking the band more seriously after winning the Battle of the Bands two years in a row.

While El-Abidin didn’t join up with the band until a year into its run, lead vocalist Ben Stevens considers him an original member just the same.

Juice’s seven members play instruments ranging from the bass guitar to the electric violin. Since each member grew up with different musical likes and dislikes, the band pulls inspiration from each other to form their signature Juice sound, Stevens and El-Abidin said. One member of the band will hammer out a chord progression or lyric and the rest of the band will shape it from there.

“Common elements that make up the foundation of our sound, although we might use genre … as a tool for a narrative that we are trying to establish, it is still true that a Juice song is a Juice song. I think that that is something that is really cool that we have been able to build that together,” Stevens said.

From their origins at Boston College to their recent performance on the Today Show, the band takes pride in their friendship and their growth as individuals throughout their journey. In the future, Juice is looking forward to their tours on the Northeast and on the West Coast, where they hope to record their first album.

Joe Hertler & The Rainbow Seekers are the main event, and the band is set to bring a post-Motown, folk and rock combo to Iowa State. However, in an interview with Two.One.Five Magazine, Hertler himself said their music is not that simple.

“I take a lot of pride in being a band with genre ADD. I guess we never find ourselves comfortable or content sticking to one genre. We just get bored, so we say “let’s try some songs in this direction. It’s a lot more natural than that though, not really a conscious thing,” Hertler said.

According to their website, The Rainbow Seekers formed when the band’s bassist and producer, Kevin Pritchard, discovered Joe Hertler. They then formed the Rainbow along with drummer Rick Hale and guitarist Ryan Hoger. Eventually the Rainbow Seekers would add three more musicians to the mix.

According to the band’s webpage, the live show is an extremely important part of their band.

“The live show is the purpose of the band. This is why we make music. Playing music is a symbiotic process, and without a crowd it is just a bunch of guys jamming,” Hertler says on their webpage. “We believe that performance is not a High Art operation, and that you should do anything you can to ensure that the crowd is having a good time. From piñatas to confetti, to fog, to flowers, to drum solos, to strobe lights, to Thor, to sword battles—literally anything goes.”

These two bands take the Maintenance Shop stage at 8 p.m. Doors open at 7:30 p.m. with an admission of $12, or $8 with a student ID. Online tickets are available for a $2 up-charge.