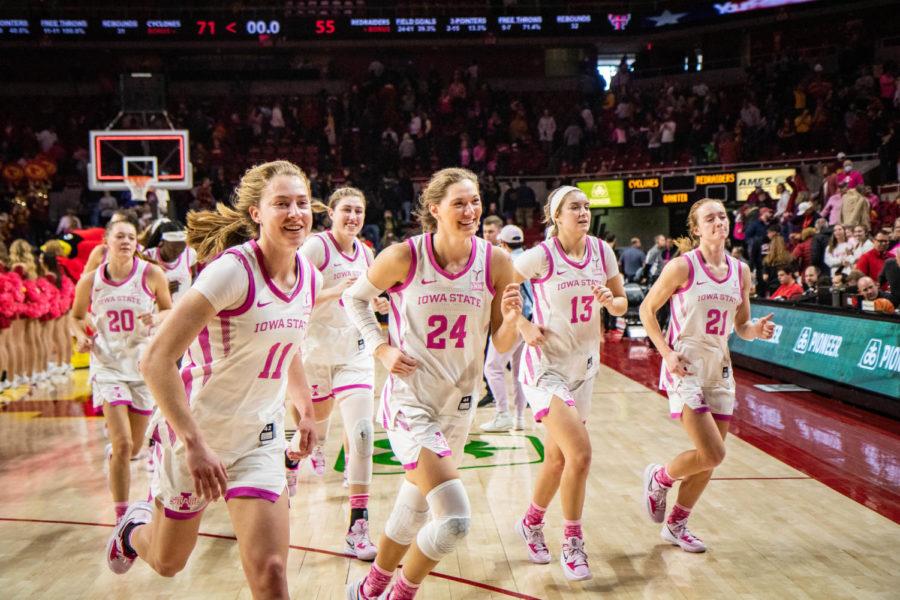 (From left to right:) Emily Ryan, Ashley Joens, Maggie Espenmiller-McGraw and Lexi Donarski run off the court after the Cyclones' 71-55 win over Texas Tech on Feb. 26.

Now is when it really starts to feel like March.

Following a historic regular season that saw the team secure a two-seed in this year’s Big 12 Tournament, all that matters is what’s ahead for Iowa State. The “next 40 minutes” approach is what served the Cyclones well all season, and in a tournament format, 40 minutes is all you’re guaranteed.

Spending most of the week not knowing who they would play between TCU or West Virginia, two things were clear.

The Cyclones are happy to be there, and they’re ready to get into that “March mode,” as Head Coach Bill Fennelly called it.

With the past two Big 12 Tournaments being so unusual due to COVID-19, with one not even taking place and the other being played without fans in attendance, the team is eager to be a part of the “Hilton South” atmosphere they’ve heard so much about but haven’t had the chance to experience yet.

“We’re excited that we get to experience that this year, and we’re gonna come ready to play,” Emily Ryan said.

With excitement, though, there must be preparation.

The team has had a chance to focus on themselves while awaiting their opponent, but they’ve also been building in time focused around either TCU or West Virginia.

Since games are 40 minutes, the team practices hard for 40 minutes. It’s a weird thing to do after spending most of the year knowing who was up next, but the Gulf Coast Showcase champions have been there and done that early on in the season.

“We just focus on winning one at a time,” Big 12 Defensive Player of the Year Lexi Donarski said. “We did the same thing when we were down in Florida having to play three days back-to-back, so I think tournaments like that prepare us for something like the Big 12 Tournament.”

From a health standpoint, everyone outside of freshman Denae Fritz is available. However, Maggie Espenmiller-McGraw will be limited.

The junior has had a nagging lower-body injury that affected her the majority of last season, early on in this one, and it has now reared its ugly head once again.

Fennelly outlined the plan for Espenmiller-McGraw, saying that if this were happening earlier in the season, they might shut her down temporarily, but when they’re this close to the end, the focus is on making sure the guard gets to contribute in the most important stretch of the year.

“She’s not practicing much,” Fennelly said. “We’re just trying to get her to the finish line. She’s on a pitch count. She’s probably looking at 10 to 12 minutes a game, maybe a few more here and there.”

With the men’s and women’s tournaments going on in Kansas City at the same time, there will be an added layer to the different feel of this year’s event.

Fans won’t just be there after two years of missing out. They’ll be there for both teams, and that’s something that the Cyclones find really special.

Fennelly has been a big proponent of a change to this format, and he’s happy to see the Big 12 make it happen.

“I think it’s gonna be a lot of fun, especially with the guys doing so well,” Fennelly said. “We just wanna be a part of it, and hopefully it’s something that they’ll enjoy.”

Searching for its first Big 12 Championship since going back-to-back in 2000 and 2001, the road ahead could become as tough a draw as they could’ve imagined coming into postseason play.

A third meeting with Texas could happen in the second round, and if the Cyclones were to make the finals, they’d quite possibly be facing a Baylor squad who is the favorite to win the tournament yet again.

Going 0–4 with a –94 point differential against those two teams in the regular season, the challenge would certainly be great.

Crazy things have already happened over the past week, though. As Fennelly pointed out, seven-seed Kentucky won the SEC over heavy favorite and top-ranked South Carolina. Utah made the Pac-12 final as a six-seed, and Miami made the ACC final as a seven-seed.

The past is the past, and although it’s important to understand strengths and weaknesses at this point of the year, everyone gets one more shot.

The Horned Frogs and Mountaineers went a combined 0–4 against Iowa State and should be expected to give everything they’ve got with one more shot against the Cyclones.

Should Iowa State come up against Texas or Baylor, one more shot can be all that’s needed.

“That’s the great thing about these tournaments,” Fennelly said. “That [seed] just dictates what color jersey you’re wearing. Everyone gets another chance.”

That’s the beauty of March, and that’s all any team can ask for.

No. 10 Iowa State will face the winner of TCU and West Virginia at 5 p.m. Friday at the Municipal Auditorium in Kansas City, Mo. The game can be streamed on Big 12 Now on ESPN+.