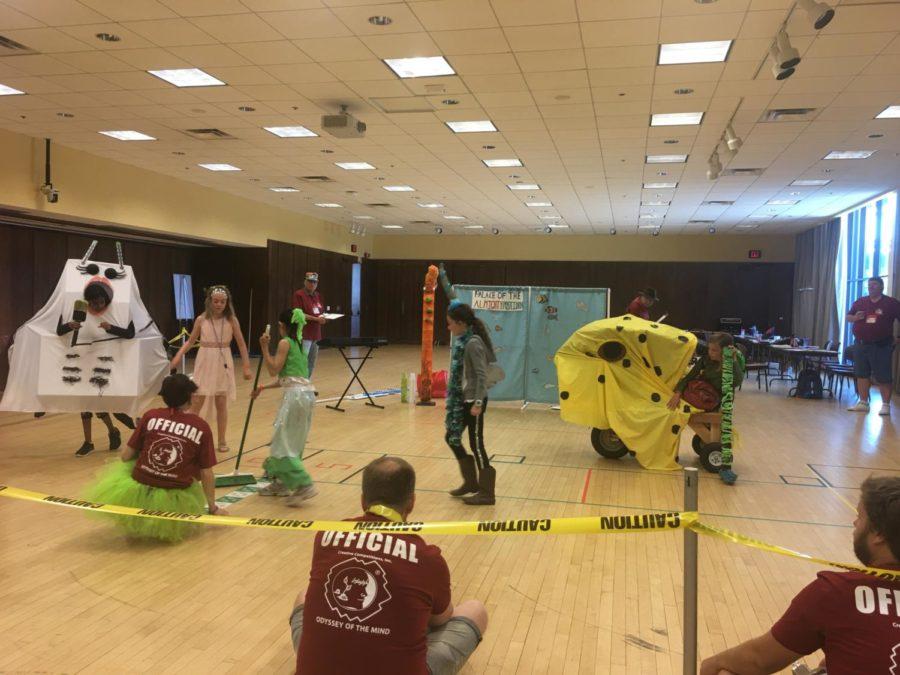 Iowa State continued to host Odyssey of the Mind’s Grand Finals on May 26, and the Memorial Union was one building which saw non-stop problem solving scenarios from dozens of teams throughout the day.

The Sun Room and the Great Hall each hosted division one and division two teams respectively. A problem was disclosed to contestants months in advance, and they had time to develop their own solution, but they also had to make it entertaining.

Division one is made up of teams ranging from kindergartners to fourth graders, while division two is made up of fifth to eighth graders. Both divisions had the same problem to solve. They were tasked with creating a vehicle that could complete a triathlon of jousting, curling and a three-cone obstacle course. Contestants weren’t allowed to use pre-motorized vehicles or push the vehicle from the ground.

Even with so much time to prepare, nobody can account for everything. Some trials were fraught with malfunctions, but part of the Grand Finals is about adapting to new situations.

“It’s also hard because they can get nervous,” said Liane Kwon, a coach for the Division 1 group from Seocho-gu, South Korea. “Some of them are 7 or 8 years old, but they still have so many ideas. We help them prepare some, but they’re the ones with all the ideas.

Some teams suffered malfunctioning equipment, like a division one group from Bailey, North Carolina whose vehicle caught fire during their trial.

“That ain’t the first time this happened,” 10-year-old Phillip Wilson told judges after his team’s trial. “It caught on fire once at school, too.”

The Bailey team engineered their own motorized cart to maneuver the course. The vehicle operated quite smoothly, but it was determined the battery commanded too much power for the wiring to handle, which caused the motor to overheat and catch fire.

That wasn’t the only hurdle the Bailey group overcame. A flood at their school forced them to recreate most of their props before they came to the Grand Finals.

“The pipes burst in the school, it ruined most of what we had,” said Francis Baker, a teacher at Bailey Elementary and one of the group’s coaches. “We had to restart with a lot of our props.”

Constructing the vehicle was only part of the competition. Contestants are also judged for the creativity they bring to the table. Groups organized their own skit and turned the obstacle course into a grand performance.

A division one group from Waterboro, Maine weaved the challenges together with a story about time traveling space aliens that made war with cannibalistic, arena-loving warriors in ancient Sparta. A division two team brought Pac-Man to life in the Great Hall with lights and colorful, intricate costumes.

“We chose Pac-Man because we thought, ‘What’s the opposite of sports?’ since it’s a triathlon,” said Mia Coughlin, a member of the team from Geneseo, New York. “It turned out to be a cool way of showing the different levels of the competition.”

Teams were also tasked with using tape in innovative ways for their performance. This resulted in curious costumes made of cassette tape film and duct tape, and some teams even incorporated origami, such as the group from New York’s Warwick Middle School.

“We probably spent over 500 hundred hours rehearsing and making the costumes,” said Olivia Holland. “Our hands were hurting from doing so much origami.”

The Warwick group also had to reign in the length of their production. The group wrote a skit where the different characters were all different constellations, such as Pegasus and Andromeda. Their performance featured singing, dancing and storytelling on top of the activities in the competition.

“In the beginning it was like 15 minutes,” said Warwick contestant Alexa Keys. “We didn’t actually cut it down to eight minutes until two weeks ago.”

Keys and Holland have been performing in Odyssey of the Mind for years, as has their friend Naa Korkoi “Kooki” Aryeetey, whose enthusiasm for stars helped shape the team’s skit.

“I really like constellations,” Aryeetey said. “I like learning about their stories, but mostly I like them because a lot of them are yellow,” she added, giggling.

Aryeetey was the narrator of the show, while others in the group played the parts of Hercules, Orion and other Greek heroes tasked with babysitting a demigod for three days.

“The entire plot mostly came about by us being tired and making jokes,” said Rachel Powers.

Perhaps the most impressive part of the triathlon is the autonomy of the competing children. Teams are required to have coaches, but all it’s the children who are responsible for the ideas and how they’re applied.

“It’s great having so much control and being able to make our own decisions,” Keys said.