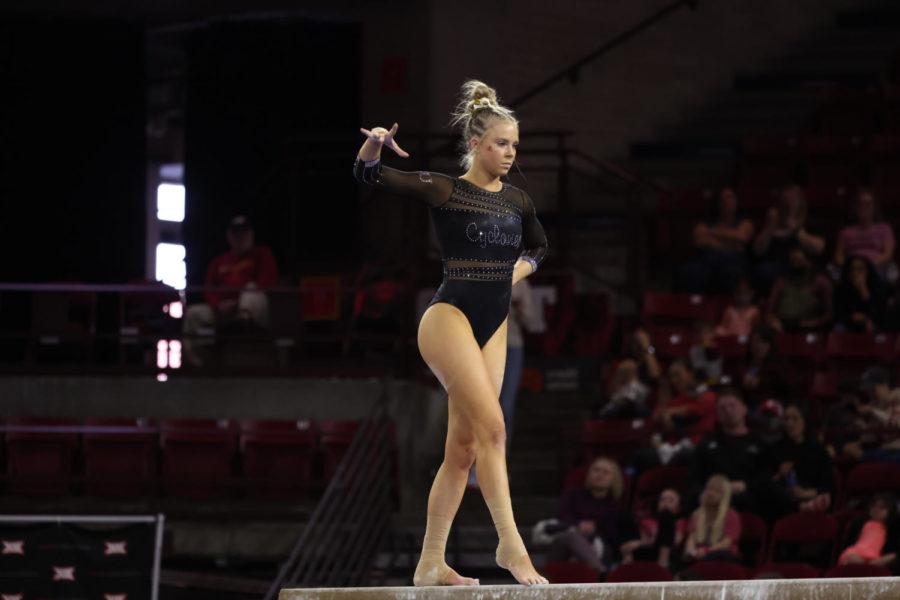 Iowa State gymnast Sophia Steinmeyer performs on the balance beam at the 2022 Big 12 Gymnastics Championships on March 19 in Denver, Colo. Steinmeyer scored a 9.775 on the beam. (Photo courtesy of Ethan Mito/Clarkson Creative Photography)

Iowa State gymnastics competed in the first round of NCAA Regionals Tuesday afternoon, beating out Western Michigan with a final score of 195.750-193.575.

After finishing in last place at Big 12 Championships, the Cyclones knew they had to bring the energy and show up as a team.

That energy was brought on Tuesday, and confidence was in the air. Even with a few falls and steps out of bounds, it did not stop them from pushing past Western Michigan and getting the opportunity to move on to the second round.

The Cyclones led Western Michigan by more than a point throughout the whole competition and will prepare for their next challenge Thursday night.

Picking up the pieces

Iowa State gymnastics was lucky enough to start the competition on their strongest event: the vault.

Additionally, they were also able to compete in the same event rotations that they do when competing at a home meet.

Kaia Parker was first for the vault lineup and ended up taking a fall on her vault. Because of that, she ended up with a score of 9.100.

The five gymnasts following her knew that they would have to step up even more and perform the best vault they could, as the next five vaults would more than likely count.

In gymnastics, only five of the six scores are counted. So, with a fall, the team needed five scores better than a 9.100.

Not to worry, however. That is exactly what they did. The remaining scores were either a 9.750 or higher.

Hannah Loyim was second in the vault lineup and ended up tying her career high with a 9.750. Kelsey Boychuk followed and put up a 9.850 for her vault. Sophia Steinmeyer and Makayla Maxwell both put up 9.800.

Josie Bergstrom not only led the vault lineup with a 9.900, but she also stuck her vault and earned herself a career high.

It can be difficult to compete a successful vault after seeing a teammate fall, but the Cyclone’s became a team and put the pieces back together. After just the first rotation, the Cyclone’s led Western Michigan by 1.750 points.

Sticks will do the trick

Going into the competition, head coach Jay Ronayne could not stress enough the importance of stuck landings. It is something the team has continued to work on all season and something that has a huge impact on the final outcome of a competition.

Iowa State gymnastics brought their sticks, however, and it was visible in competition that that is something they have worked hard on in practice.

After a successful vault rotation, the Cyclone’s moved to their weakest event, the uneven bars. Maxwell started off the bars rotation by matching her season high with a 9.825.

Ariana Orrego stuck her bar routine and had the highest score for the Cyclone’s bars lineup with a score of a 9.850.

After their second rotation, the team was still ahead by 1.750.

The balance beam was where Iowa State saw a majority of their sticks and where they ended up leading Western Michigan by almost two points.

Loyim competed first in the beam lineup and stuck her landing with a 9.825. Josie Bergstrom and Meixi Semple also stuck their landings and both scored a 9.800.

Steinmeyer and Boychuk had lower scores than usual, but it is important to remember that scoring high can be more difficult with four judges as opposed to two in the regular season.

Even with lower scores, the Cyclone’s were still ahead by 1.975.

Onto the next round

The last event for Iowa State was the floor exercise.

The Cyclones only competed five gymnasts instead of six on the floor exercise and even with a step out of bounds by Kaia Parker, which scored her a 9.600, the team was still able to pull out a win over Western Michigan.

Because Iowa State came out on top, they have advanced to the second round of NCAA regionals.

They will compete Thursday night against No. 2 Florida, No. 15 Denver and Ohio State. The top two teams from that competition will move on to compete Saturday in the Regional Final.

In order to be successful in their next competition, the Cyclones will need to continue to bring the energy, be there for one another and, of course, stick their dismounts.

Thursday’s competition is set to begin at 7 p.m. central time.