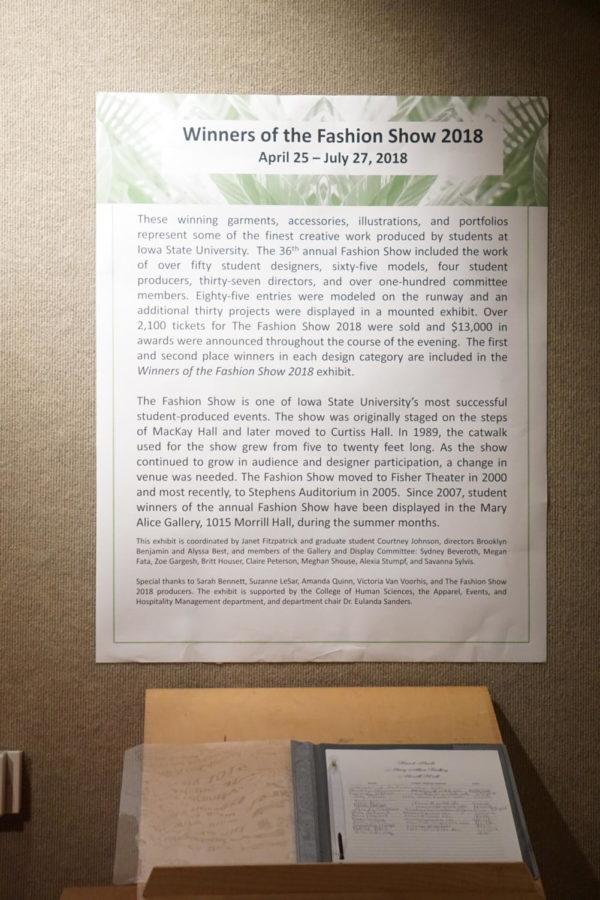 Wednesday, The Fashion Show torch was passed. Several students involved in The Fashion Show and faculty and staff of apparel, merchandising and design gathered in Morrill Hall to view the winning garments of the Fashion Show displayed in the Textiles and Clothing Museum, but also to hear the announcement of who the new producers for the 2019 Fashion Show would be.

Sydney Lawrence – Lawrence, senior in apparel, merchandising and design, has also been involved with The Fashion Show since she came to Behind the Scenes Day as a senior in high school. From there she went from being a committee member her freshman and sophomore year and was a director of Fashion Week this year.

“I worked really hard for this but like other people have probably said ‘everyone is very qualified, so I feel really honored,’” Lawrence said.

Emma Kachelmeyer – Kachelmeyer, senior in apparel, merchandising and design, has been involved with The Fashion Show for three years, going from being a committee member her freshman and sophomore year and then was a director of the Pop-Up Shop this past year.

“After being with it for three years and seeing so many different sides of it, I’m really excited to get this opportunity to be on the front of it and seeing all aspects come to life and kind of be in charge of all of that,” Kachelmeyer said.

She said she would also like to implement some changes for 2019’s show.

“I want to see a little bit of change in it and I’m hoping to do another guest similar to Patagonia,” Kachelmeyer said. “I’m hoping we can have a lot of campus interaction with the guest designer again, so we’re super excited about that.”

Hannah Harnack – Harnack, senior in event management, has been with The Fashion Show for two years going from committee member to director of fundraising and now producer.

“It’s crazy,” Harnack said. “I can’t believe it and I’m still kind of shocked and I think I’ll wake up tomorrow morning like, ‘this isn’t real,’ but it is real. It’s an honor and a great opportunity. I expect to be really busy but loving every minute of it. But I expect it to be another successful show.”

“It’s honestly kind of surreal because we were just talking about this the other day. It feels like just a couple of weeks ago we were the ones here about to be announced for the 2018 show and now all of the sudden, we did it. And now we’re here announcing the 2019 producers,” said Helberg, senior in apparel, merchandising and design. “We’re all just so thrilled with how the show went and we’re all just so grateful for everyone’s hard work.”

Before the producers were announced, the event began with an opening of an exhibit in the Clothing and Textiles Museum featuring the winning garments from The 2018 Fashion Show.

“I’m a little sad,” Brownmiller said. “But I’m also excited to see what comes next because I’m really excited about our new producer team.”

Katrina Pedrick, senior in apparel, merchandising and design, won the Best in Show award for The Fashion Show 2018.

“I didn’t expect it to look this professional and it’s awesome to know that a bunch of people get to look at this over the summer and see all of my hard work, so it’s really exciting,” Pedrick said.

Dean of the College of Human Sciences Laura Jolly attended the event. Jolly said she loved all of the colors and textures featured in the exhibit.

“I think it’s fabulous. It’s very inventive,” Jolly said. “It’s a mix of what we saw on the runway mixed with what we saw in the mounted exhibit as well.”

Helberg, who has a few pieces of her winning garments in the exhibit, said she thought the exhibit looked stunning and was excited to see her garments being displayed.

“I mean they did such a good job of telling a story from start to end, especially with the colors because everything is just so cohesive. It just lines so nicely. I think they did a great job,” Helberg said. “It’s pretty exciting. I’m not going to lie. I’ve never had anything on display in a glass case before so it’s pretty cool. It’s very official.”