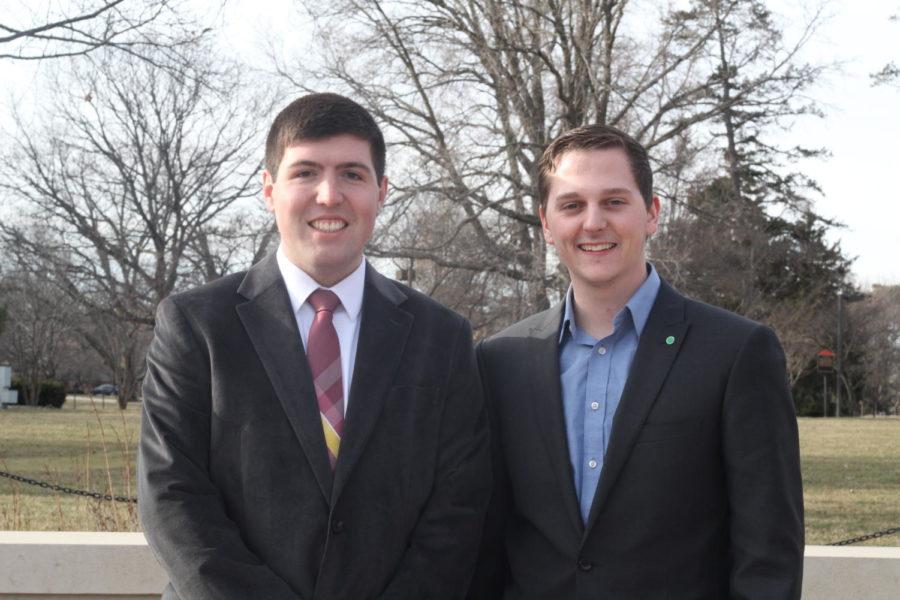 Freshman year, before classes even started, Cody West had Student Government on his mind.

“I still remember my first day on campus,” West said. “I emailed Hillary Kletscher at the time, who was student body president, and I said: ‘… I’m really interested in finding a way to be involved in Student Government at Iowa State. Can you help me?’”

She responded: Yes, Monday at 8 a.m. — the first day of classes.

“And people just can’t believe it, because it’s such a ‘Cody West thing’ is what they tell me,” he said.

Growing up 40 miles south of Ames in Altoona, Iowa, West had always known that Iowa State was the place for him. The extent to his participation on campus, however? He wasn’t so sure. In his mind, he was here to research and study.

“My mom had talked about Iowa State and I just knew it was where I wanted to end up. I was very selective in the colleges I applied to and I decided to come here way before it was close to deadline,” West, president, said.

But for vice president Cody Smith, who met West his freshman year when the two lived in the same hallway on the sixth floor of Larch Hall, his first few days on campus were different. To him, Iowa State and all it had to offer hadn’t yet solidified, the university still had to prove itself to him.

From rural Indiana, Smith remembers his second day living on campus. During Destination Iowa State activities, he began thinking, “I want to go home. I don’t want to be here. This was a mistake.”

But then he realized why he came to Iowa State in the first place and why on his first campus visit in high school, he knew that he’d have to explain to his family why going to college out-of-state and in Ames felt right.

“I was like, I know to do what I want to do with my life and my career and I’m going to have to invest in myself here,” he said. “I’ll be out of my comfort zone, so that’s what motivated me to knock on the doors of random strangers in my hallway and ask if they wanted to go get food.”

For West and Smith, they feel the past year has been successful because of the relationships they were able to foster and build upon during their administration.

While the office of Student Government president and vice president carries weight, to West and Smith it’s more about what you do with the title than the position in and of itself.

“We don’t have what I would describe as power in our positions, we have access,” Smith said. “And if you have a bad relationship with the people you need access with to be successful, you won’t get anything done.”

Smith pointed to the spring concert, a platform point the two campaigned on before being elected.

“The [Cyclone] Carnival, even,” he said. “We had to sit down and sell the idea to people that give the OK before we could even start planning it.”

For West, this decision to lead through relationship building was based on the way he saw Student Government administrations operate before him. He cited former Student Government presidents Dan Breitbarth and Cole Staudt who oftentimes had a “feet to the fire” attitude.

“I think we found that’s not what worked for us this year,” West said. “We accomplished a heck of a lot by doing that and relationships have just been absolutely key, especially with us both being in Student Government and already having built those.”

So, what did the two accomplish in the past year? It’s tricky.

The duo campaigned on a university-wide calendar system that could be used as a tool to better engage with the student body. But, it never came to fruition.

At the same time, however, West served on the presidential search committee which consumed many of his time as Student Government president, but also helped bring a new leader to the university.

While Cyclone 101 — a course heavily campaigned on by Staudt and West, as well as West and Smith — was never implemented, the university underwent a task force to review the on-boarding process for incoming and transfer students.

The two wanted to address lease gaps for students but fell into a larger housing issue regarding student occupancy in homes, as well as the conditions in which students live. This issue fostered lobbying by Student Government on behalf of student’s voices, as well as the launch of a residential rating system for properties across Ames.

“Each day and each semester presents unique classes and challenges and initiatives and crises on campus, I mean, it’s everything that you could possibly think of,” West said. “We don’t have it all figured out, some people think we do, but we really just take it one day at a time and do the best we can and I think that’s what we’ve done over the past year.”

In deciding to run for Student Government vice president last year, Smith knew that he’d have to give up being a traditional college student — less time for friends, family and classwork and more dedication to serving the institution as a whole.

He feels that despite the long meetings, the stress and the countless hours put into the position, it was worth it.

“Serving in this role, I’ve done my best and put my heart and soul into over the last year making sure that more people can have that experience,” Smith said. “I come from a low-income family, I’m a first generation student college student. I get the struggles of people that do that.”

For West, who served as vice president for a year and as president the next year, he touched on the visibility of the position and himself as a representative of the students at Iowa State.

“I never thought I’d be in something so visible,” West said. “I never knew that as a 21-year-old everything I did would be under a microscope and that’s taught me a lot, how to conduct myself and think before I speak.”

“I wouldn’t trade it for anything in the world,” West said.

But that doesn’t mean West and Smith won’t try to do their best to enjoy their last month at Iowa State as students.

“The fact that other people get to experience this is what makes walking away OK,” West said.

Editor’s note: The Cyclone Carnival has since been canceled due to a forecast of rain. Read about it here.