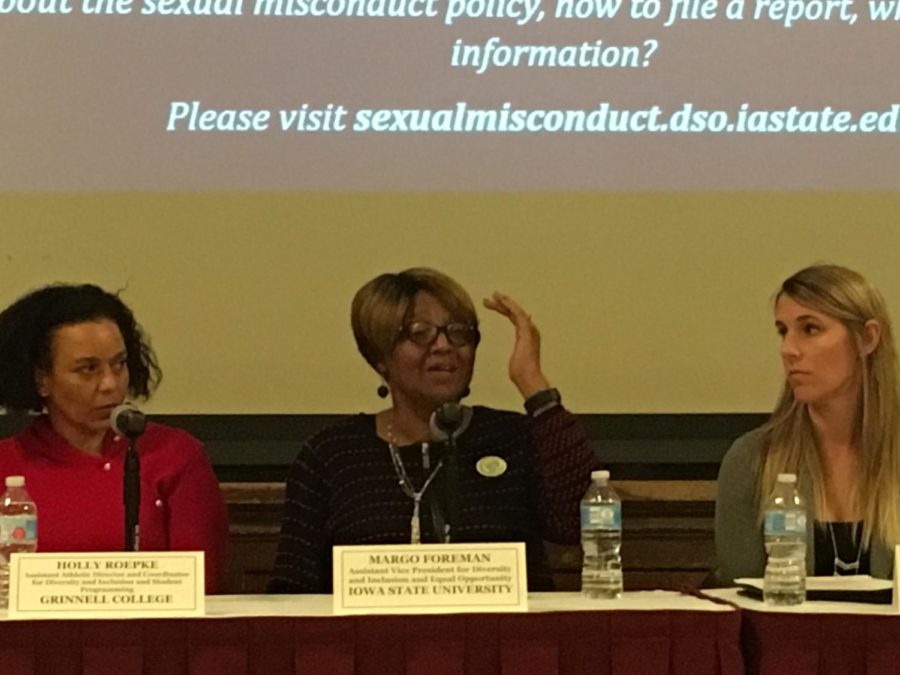 Margo Foreman speaks as a panelist during the panel discussion following the ABC 20/20 special "Sister Survivors".

Opening with a moment of silence for sexual assault survivors and those unable to share their stories, the “Sister Survivors” documentary and panel discussion addressed a culture of silence and Iowa State’s role in preventing sexual violence.

The event, which began at 6 p.m. on Monday in the Great Hall of the Memorial Union, aired the ABC 20/20 special on the sexual abuse scandal surrounding Larry Nassar at Michigan State University, and led to discussion on university accountability. Panelists answered some of the questions surrounding the university’s responsibility to follow the wishes of a survivor, while diligently working to educate the Iowa State community.

“The culture belongs to the citizens of the campus,” said Assistant Vice President for Diversity and Inclusion and Equal Opportunity Margo Foreman.

It is up to the staff and students at Iowa State to decide what it means to be a Cyclone and hold one another accountable.

Representatives from Grinnell College and Iowa State collaborated on the panel to discuss questions stemming from the documentary and how it applies to Iowa State.

Many of the panelists attested to the challenges faced by student athletes in stopping sexual abuse.

According to Foreman, student athletes could fear their coming forward could have a negative impact on the team and lead to them staying silent.

Not all acts of abuse are visible or easily recognized by close friends or family, as seen in the victims of Nassar.

However, Ayeni also said the student athletes she works with use the training and resources provided to them to recognize the signs of sexual misconduct.

Jacobson said, “the genie’s not going to go back into the bottle.”

By May 15, the NCAA will ask each school to sign a document with their Title IX coordinator, athletic director and college president to attest that sexual violence education training has occurred on campus. The NCAA will publish the names of the colleges who have signed off in a report to be published in August on ncaa.org.

One measure Iowa State is taking is a student-athlete focused Title IX training set to launch in the fall of 2019, aiming to protect student athletes from sexual abuse and put an end to sexual violence through education.

To better aid a survivor, Iowa State has also implemented a change in the student sexual misconduct policy as of Feb. 15, 2017. The new changes allow for more informal process opportunities. With a formal investigation, they are allowed to bring any witnesses or evidence they think pertains to the case. The same process applies to the accused person. If a reported assault occurred during the old policy, the old policy applies.

The event was sponsored by ISU Green Dot, Student Health and Wellness and the Committee on Lectures.