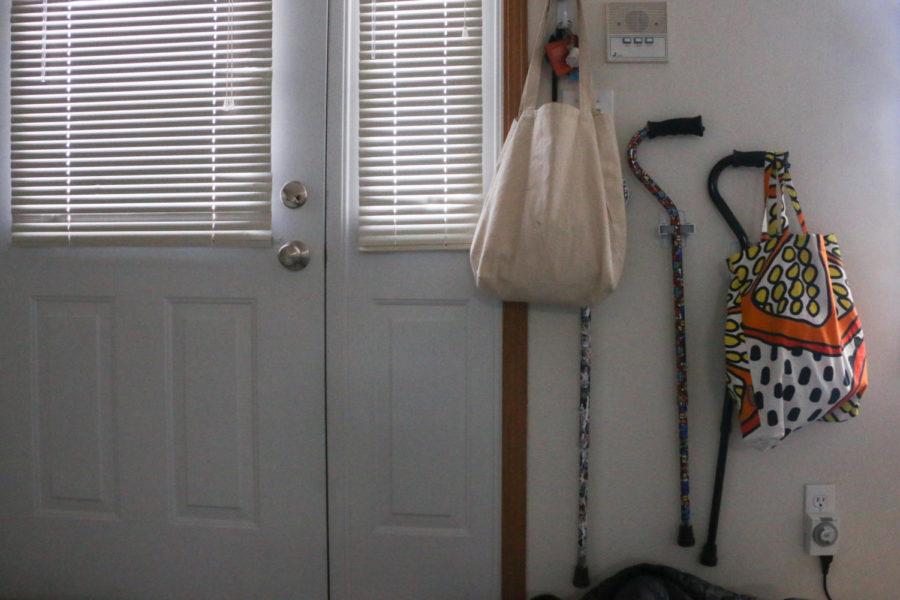 Three canes hang next to the door in Laura Wiederholt's apartment. Wiederholt has postural orthostatic tachycardia syndrome, which causes a lack of control in the autonomic nervous system.

Imagine living your life on Iowa State’s campus with a physical disability: Does the building you’re in have accessible bathrooms? Is there a handicap parking spot available? Is there an elevator? How will this affect your mental health?

Imagine living your life on Iowa State’s campus with a mental disability: Will you be able to function in the morning after a panic attack kept you up for hours the night before? Will your professor understand you’re too depressed to get out of bed for class? Will people believe you have a disability? How will this affect your mental health?

Laura Wiederholt, former president of the Alliance for Disability Awareness and senior in biology, doesn’t have to imagine this life or how it would affect her mental health.

She lives every day with what she describes as “word soup of stuff that people see as wrong with you.”

Wiederholt added postural orthostatic tachycardia syndrome, or POTS, which is a form of Dysautonomia, to her word soup when she was 18 years old and soon to be a freshman at Iowa State. Generalized anxiety disorder and major depressive disorder were already in the bowl.

“Sometimes, it’s not someone’s disability that’s holding them back, sometimes it’s other people’s reactions to it,” she said, explaining some with physical disabilities may also experience mental health issues such as anxiety and depression due to these reactions.

Whether this reaction is rooted in curiosity, such as the question of how Wiederholt and her boyfriend, who doesn’t have a disability “work,” to which she replies: “I have a disability and he doesn’t and we date. That’s how it works.” Or the misconception that those with physical disabilities also have intellectual disabilities.

“You can certainly have both, but you don’t have to have both and it’s really weird when people treat you like you do,” she said.

She recalled a time when she was sitting at an airport in her wheelchair, which she uses when POTS makes it too hard for her to walk, drinking a smoothie when an employee walked up to her and asked her if she knew her name and where she was going. She said four different people asked her if she was lost during that trip.

Although frustrating interactions with uninformed strangers may be annoying, Wiederholt explained one of the main stressors, at least for her, is dealing with the medical side of her disability.

“If you break your arm, there’s one clear answer: the pieces of your broken arm need to get put back together,” she said. “But when you’ve got something that’s more unusual, it’s not that simple and they may not know what to do.”

Two years ago, Wiederholt visited a doctor to express her concern that the cause of her headaches may be craniocervical instability.  This doctor dismissed her headaches as migraines.

Now two years later, Wiederholt explained her symptoms to a new doctor, who said craniocervical instability may be a possibility. Wiederholt is now waiting on insurance issues to be able to receive a scan to find if this instability is the culprit.

Another issue Wiederholt has faced with doctors is finding one who takes her mental health conditions into consideration as well as her physical conditions. And vice versa with therapists.

“A lot of people think of the anxiety and depression more as a tacked on medical condition,” she said. “Disability can be a separate thing from any mental health issue that someone might have or their mental health issues may be their disability.”

She explained people with mental health disabilities experience disability differently. They may face their professors, bosses, parents, peers and society as a whole not believing they have a disability.

For some of these people, an excuse of “my depression is so bad that I can’t get out of bed,” or “I’m exhausted because I was crying and shaking on the floor for hours because I had a panic attack,” isn’t legitimate.

“People will say ‘I get nervous before exams’ or ‘I was nervous before I got married,’” she said of those who try to relate to anxiety. “That’s as far as they can go — a time in their life when they’ve been nervous.”

Wiederholt said she’s found the stigma associated with mental disabilities is the hardest part about having one (or two). However, for her, the diagnosis of generalized anxiety disorder to the level of disability was almost like a relief.

“I didn’t know I had anxiety, I thought that I just really sucked at being alive,” she said. “I didn’t know if everyone had the feelings that I had, but they were just dealing with it better.”

In reality, what she was experiencing wasn’t happening to everyone, but it was affecting more people than she realized. When she was first diagnosed, she said she didn’t realize how common anxiety was. Anxiety affects 40 million adults in the United States age 18 and older every year and is the most common mental illness in the U.S.

According to statistics provided by Student Accessibility Services, 553 students or 33 percent of students who are receiving services from Student Accessibility Services are found eligible based on a psychiatric or mental health disability, such as depression or anxiety. As Wiederholt tells those who open up to her about their anxiety: “you’re in the least exclusive club.”

But this club is one Wiederholt would gladly quit if given the chance.

“If I had any of the stuff go away, I’d take the anxiety,” she said. “But I’m not going to sit there every day saying ‘I want this to go away’. This is who I am, this is a part of me, just like I have brown hair and I’m kind of tall and I talk way too much.”

One subject Wiederholt enjoys to talk about is her disabilities. She said being open about all of her disabilities is important for her because it can be a comfort for people who may be going through the same things to see they’re not alone. She also said a goal of her openness is to expose people to disabilities who may have never experienced it.