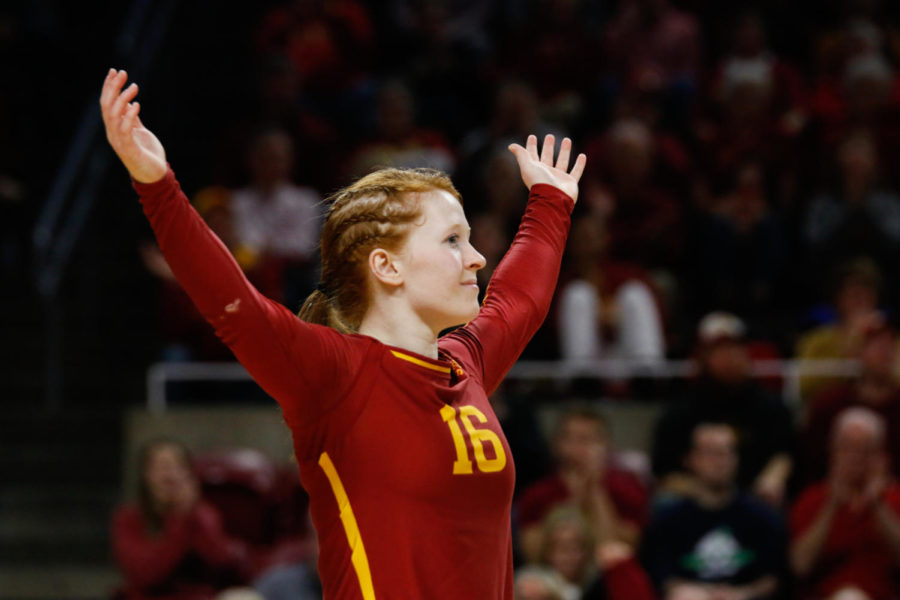 Then redshirt sophomore libero Hali Hillegas celebrates after Iowa State got a point against Wisconsin during the second round of the NCAA Tournament. Hillegas and the Cyclones would drop their match 3-0 (25-22, 25,20, 25-23) to the Badgers.

The Iowa State volleyball team will make the 130-mile trip from Ames to Iowa City to face in-state rival, Iowa, on Friday for Iowa State’s fourth game of the spring season.

During the fall season, Iowa State beat the Hawkeyes three sets to one at Hawkeye-Carver Arena.

During that game, Iowa State played from behind during much of the game as the Cyclones had numerous miscues and missed shots that allowed the Wildcats to pace themselves ahead of the Cyclones.

“I think we just kind of were, not [necessarily] taking [Wayne State] lightly, but maybe not respecting them as much as we probably should have,” said Hannah Bailey after Iowa State’s tournament versus Wayne State and Drake.

Bailey is a senior right side hitter for Iowa State.

After that first game, the players said they met together and spoke on how they each could individually raise the energy level of the team.

In contrast, the second game saw the Cyclones sweep Drake with set scores of 25-21, 25-14 and 25-12. Iowa State offense hummed as the hitters and blockers, including Lazard and Schaben, were able to find sharp angles and holes in the defense to pull ahead of Drake.

Coach Christy Johnson-Lynch said she wanted the team to “hit lines” and the team did well in that regard during the second game.

Lazard in particular sent several scorching spikes at the Bulldogs.

Last season, the Hawkeyes finished with a record of 18-15 and finished in the lower half of the Big 10. The only returning player to earn Big 10 honors for the Hawkeyes is outside hitter Taylor Louis as an honorable mention.

Despite facing Iowa, the Cyclone volleyball team’s top priority will be improvement.

“As a coach you want to win [against Iowa], but you’d rather really just get better at some things and really think about performing in the fall,” Johnson-Lynch said.

For Fiona Fonoti, who is the newest assistant coach for Iowa State, this will be her first experience with the Cy-Hawk rivalry.

She said she is excited because she heard stories such as when there was a billboard erected in Iowa City reading “Cyclone State.”

Fonoti joined the Cyclones after being an varsity assistant volleyball coach at Punahou School in Honolulu, Hawaii, and was also a setting coach at Elite Setting Academy there in Hawaii.

In college, Fonoti was a three-time All-American and a Big 12 player of the year at Nebraska and was teammates with Johnson-Lynch.

For junior outside hitter Josie Herbst, her approach to the game against Iowa will not change.

“[It’s] just another spring game match, you can’t look at it as anything else,” Herbst said.

Instead, this weekend Iowa State will look to expand the offense and hit more combination plays said Johnson-Lynch.

“We feel like we’ve really established the offense and Piper [Mauck] knows what she’s doing and now we can start to add in some variety,” Johnson Lynch said.