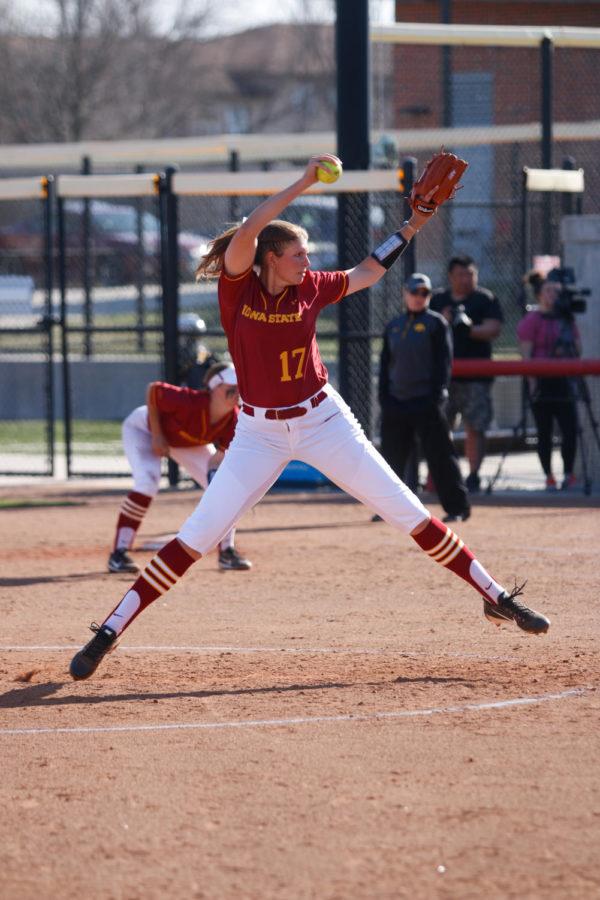 The Cy-Hawk series just got interesting, as the Cyclones picked up a huge victory over Iowa.

The Cyclones came out with pitcher Emma Hylen for this rivalry game. Hylen was previously 9-9 coming into the game, with a 3.60 ERA on 18 starts and 28 appearances.

She and the Cyclone defense came in and defended the Cyclone Sports Complex in a 4-2 victory here in Ames, Iowa.

She started off the game slowly, allowing the only runs in the top of the first to give the Hawkeyes the early lead.

“I think one of them, was when I walked that [Hawkeye player] and I got behind in the count on the next girl,” Hylen said. “I agree, I was rushing and was trying a little bit to much.”

But the 6-foot-3 right-handed pitcher from Minnesota reset herself and then gave out one of her best performances of her career.

She came out for the rest of the game not allowing a single run, with only a few scares in the latter innings.

The Cyclones found themselves in a hole during the top of the sixth inning.

“You know you got a freshman playing right field, and she made an aggressive decision to come after a ball,” Pinkerton said. “And it didn’t pay off. It skipped by her.”

But the Cyclone defensive intensity did not die out, and Hylen once again proved to be a key player in this game.

“What I did, I came out to the mound and said ’Emma you got this,‘ and we had the catcher on third and I knew she didn’t run well and told the infield we are not going to come all the way in,” Pinkerton said.

The last batter in the sixth inning hit a pop-up ball. Initially bobbled by Hylen, but due to her taller and longer arms, she was able to quickly get it in her glove and rocket it to first base.

“Those are some of my favorite plays. Just because I get up there pretty fast, not because of how high I can jump, but because I’m tall and I have long arms,“ Hylen said. “I probably should’ve hung onto the ball, but I just had to stay calm and finish the play.”

The Cyclones defense kept the Cyclones in the game after the third inning, when all scoring plays were over.

Sydney Stites came in well for the Cyclones in this game.

Stites had previously only played in her new homefield for three games, in two of them she had committed an error in those games. This week in her second outing in the Cyclone Sports Complex, she has no errors.

Stites also was 2-for-3 hitting wise, allowing the Cyclones to get that four-score lead.

Pending the academic scores, the Cy-Hawk Series title is up in the air for now.