That’s a rap: Iowa State gymnastics’ season on the line at regionals 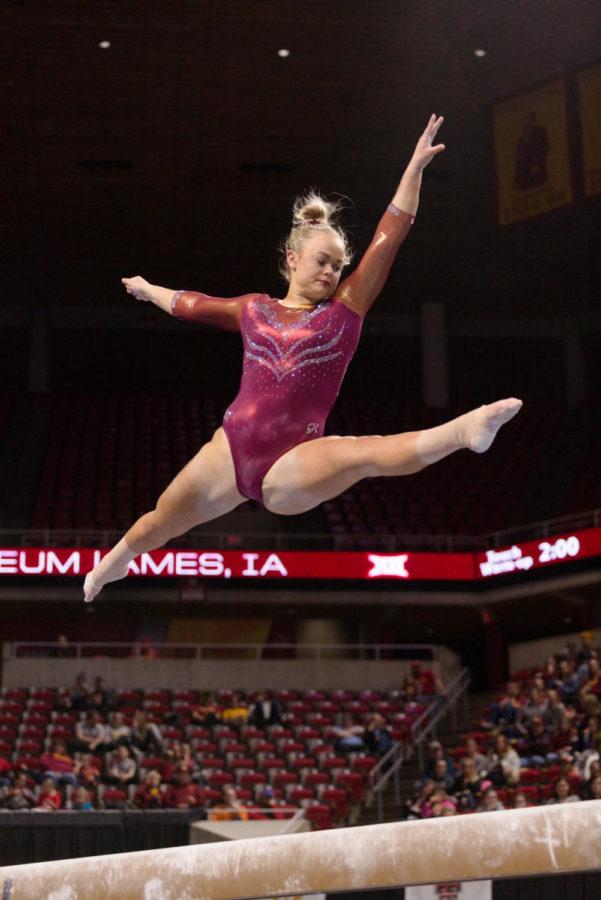 Iowa State Senior Haylee Young leaps into the air during her beam routine. Iowa State took third place in the NCAA Big 12 gymnastics championship with a score of 195.650 over West Virginia at 195.625, but behind Oklahoma at 197.775 and Denver at 197.075.

This is the weekend senior Briana Ledesma has been waiting for all season. The Iowa State gymnastics team is the No. 5 seed in the Minnesota regional on Saturday, but Ledesma isn’t talking about that. She’s talking about the team’s annual rap battle on Friday night.

“It’s the one thing I look forward to [during] the year,” Ledesma said.

The 2018 season has been one of the best in recent memory and the Cyclones acknowledge that. They are also aware of how difficult their path to the national championship is and the type of performance it would take to get them there.

Yet, at the end of Friday night, just hours before they warm up for regionals, Ledesma and her teammates will be tasked with forgetting about that pressure. Instead, they will focus on how to rhyme with words like “pandiculation.”

The Cyclones will travel to Minneapolis this weekend for what could be the final competition for this team as one unit. The Cyclones have to finish in the top two on Saturday for their season to continue in an NCAA regional that hosts the likes of No. 1 Oklahoma, No. 12 Kentucky and No. 13 Denver.

If the pressure creeps in over the weekend, it won’t be on Friday night.

“It definitely lightens the mood,” said senior Haylee Young. “It keeps us remembering that we have so much fun together and this isn’t such a stresser.”

Iowa State has faced off against every team at the regional except Kentucky this season. The Cyclones have defeated the No. 4 seed Minnesota and No. 6 seed Iowa. They’ve seen Oklahoma twice and lost handily twice. If the Sooners don’t make it to the national championship, the collegiate gymnastics community will be in shock.

It appears the Cyclones’ best shot would be to jump up to the No. 2 seed, but it won’t be easy.

“I definitely believe we can,” Young said. “I think we have to be great, but I think we are great. We just have to go in with no worries. Whoever shows up that day and hits their best routines will go to nationals.”

Iowa State basketball coach Steve Prohm was the latest figure to stop by the gymnastics practice facility to wish the team luck when he stopped by after practice on Wednesday. Iowa State football coach Matt Campbell was in a few weeks ago to provide some inspiration, as was Athletic Director Jamie Pollard.

But coach Jay Ronayne’s message during the final practice on Wednesday before the team departed Ames was much simpler.

“I’ve been talking about the team like being a stack of Jenga,” Ronayne said. “Everyone is so integral to each other that if one of them is pulled out, it could collapse. So if one of them quits, mentally, then we’re all done. That’s why I keep repeating ‘never, ever, ever quit.’”

It’s been a year since the team started the 2017 regionals in Nebraska with two falls on the balance beam. Ronayne said the team didn’t quit after that, but it was too big of a deficit to recover from.

One fall won’t hurt their chances this weekend, as long as they are able to cover it with success in other routines. On the other side, the best score of Iowa State’s season might not even be good enough to send the Cyclones to the national championships in St. Louis.

Either way, the Cyclones are going to enjoy the ride until the end.

“If this is going to be the last one, we’re not going to walk out with regrets,” Ledesma said. “If we don’t have any regrets when we walk out, there’s a possibility that that’s enough to get us to nationals.”