The Fashion Show to take over Stephens Auditorium Saturday 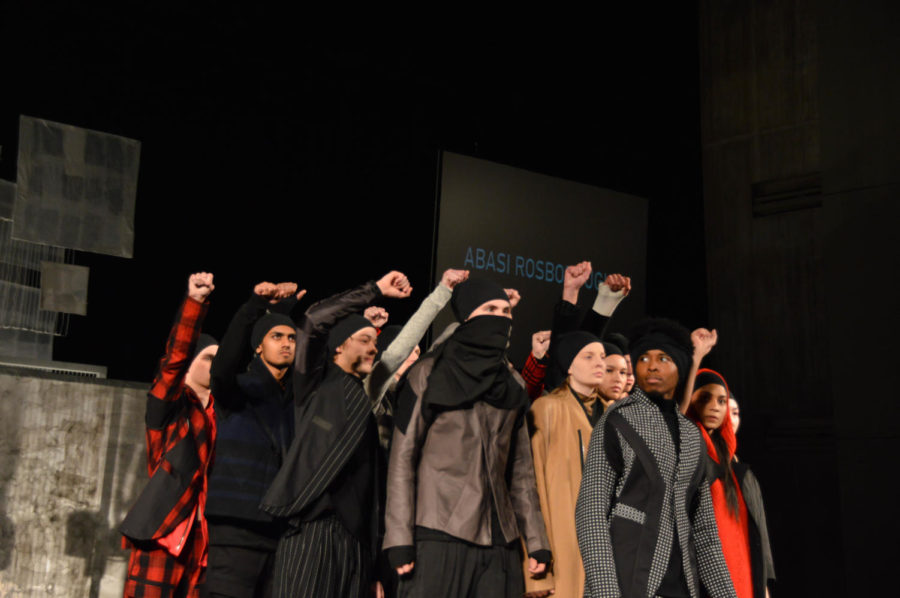 Models wearing looks from the Abasi Rosborough Autumn/Winter 2017 collection “Dissident” raise their fists at The Fashion Show event held at Stephens Auditorium on April 8. Abdul Abasi and Greg Rosborough were the guest designers this year. The collection was inspired by a photo of a woman, Ieshia Evans, as she was being arrested by police officers during a Black Lives Matter protest in Baton Rouge, La.

Every year, over 100 students come together to make The Fashion Show at Iowa State, one of the largest student-run fashion shows in the United States.

The Fashion Show will present its 36th annual show at 7 p.m. this Saturday, April 14, in Stephens Auditorium.

The event allows around 75 apparel, merchandising and design students the chance to showcase the garments they’ve created, amongst many other learning opportunities. There will be about 150 garments taking the runway.

Fashion Show members have been working since fall of 2017 — the producers since spring 2017 — to put on this event, which attracts thousands every year. Stephens Auditorium seats 2,500 and every year it’s often a near sell-out. The Fashion Show has accrued around 650 views so far from their live stream on their website.

The Fashion Show committees that come together to put this on include: photography, Pop-Up Shop, alumni and community relations, art, behind the scenes, tech design, treasurer, gallery and display, public relations and marketing, set design, design, human resources, modeling, Fashion Week and fundraising.

The Fashion Show’s theme this year is “Resilience,” which is “a representation of minimalistic modern concepts and organic greenhouse inspired elements.” The theme was inspired by the guest designer for this year, Patagonia.

During the guest-designer portion of The Fashion Show, Patagonia will show 25 to 35 pieces from their fall 2018 collection of clothing.

Four of Patagonia’s representatives will be there to speak about about their line and their business during the show and to watch the final show. The representatives who will be at the show are Rebecca Green Shank, Kena Gonzalez Todd, Sarah Darnell and Chris Teig.

Shank does product development for men’s and women’s sportswear and has done research and development at Patagonia for 30 years. Todd is a fit specialist who has been with Patagonia for 22 years. Darnell is a product designer and Teig is the director of art and illustration at the company.

“We are absolutely delighted to be featured in The Fashion Show 2018 and look forward to sharing Patagonia’s values and mission with Iowa State’s students. It has been a pleasure working with [the producers], and we are very excited for the big event.” said Patagonia’s representatives in a statement over email.

This year’s guest DJ for The Fashion Show is Iowa State alumni Nicholas Hadfield. Hadfield, who resides in Los Angeles, has been The Fashion Show’s DJ for two years. Hadfield will compose the music that will play as the models walk down the runway during every portion of the show. He said his interpretation of ‘Resilience’ came from things related to recent events in the environment.

“This year the designers sent over mood boards depicting deep rooted, resilience and idealized complimentary themes of bravery and battle ready,” Hadfield said. “From these themes, I tried to draw on the emotions and heroic acts surrounding some of the events of the past year in our nation, in particular Hurricanes Harvey, Irma and Maria.

“Local to Southern California, we experienced multiple fires and mudslides this past year, and the images of those events and the heroic people working together will forever be with me. Drawing on these powerful feelings, I wanted to contrast them with emotions drawn by thinking of the extreme ruggedness, beauty and tranquility of Patagonia and of the life that began to grow after the SoCal fires.”

There will be scholarships given out to several different apparel, merchandising and design students. Last year, there were 18 scholarship categories for designers of The Fashion Show to win.

Another scholarship winner announced during the show will be the Lora and Russ Talbot ISU Fashion Show Merchandising Scholarship worth $1,000.

The Fashion Show partnered with Versona of Des Moines to develop the case study for the scholarship.

According to The Fashion Show’s website, “The project is designed by a local or national apparel company with the intent of solving a specific merchandising concern within the firm.”

Tickets for the event can be found on Ticketmaster or at the Iowa State Center Ticket Office and range from $15 to $30.