Two Cyclones use beach volleyball as a way to keep playing 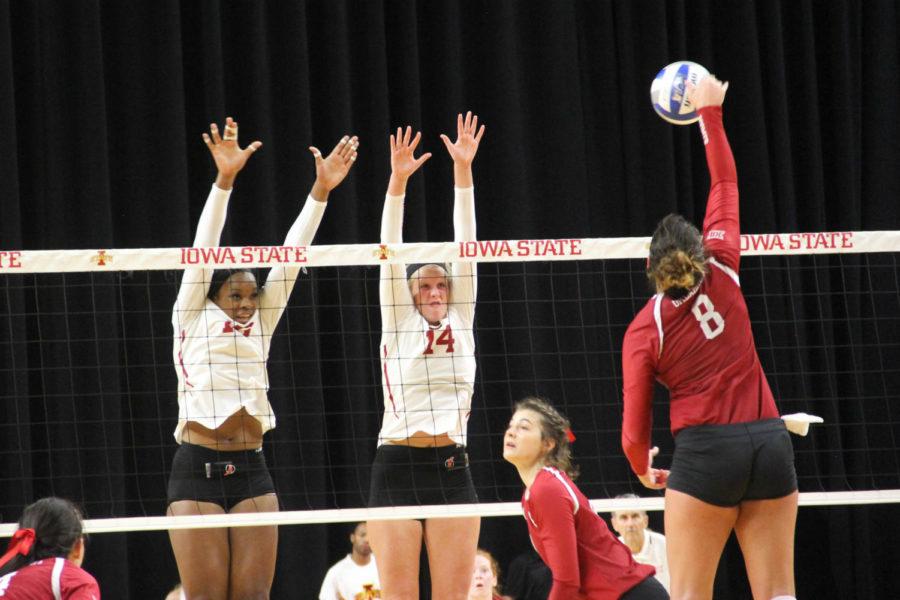 For Jess Schaben, everything came together on her visit.

After a process that lasted roughly a year-and-a-half, Iowa State’s soon-to-be senior outside hitter finally figured out how she wanted to keep playing the sport she loves. Schaben knew she wouldn’t be ready to hang it up at the end of the 2018 season, so she set out to find the best way for her to extend her volleyball career.

Her choices came down to either trying to play professionally overseas, or graduate transferring to play beach volleyball.

Ultimately, the final decision was made when Schaben took her visit to Louisiana State University (LSU), where Schaben said she felt right at home with the beach volleyball team and knew immediately it was where she wanted to be.

“The (LSU) coaches were great and the team has such a family atmosphere,” Schaben said. “If I’m going to be that far from home, that’s what I want is a family.”

That desire for a family environment is made even more important to Schaben by the fact that next spring will be her first time ever living outside the state of Iowa.

A native of Defiance, Iowa, and a graduate of Harlan High School, Schaben is an Iowan through and through and has always had her immediate family close by.

With that in mind, Schaben acknowledges there will probably be some homesickness when she eventually makes her transition to the Tigers.

However, she also says the encouragement from her family to continue her career has helped to reassure her that the decision to play beach volleyball over 1,000 miles away is the right one.

Super excited to announce that after I graduate from ISU, I will be using my fifth year of eligibility to play beach volleyball at LSU💜💛🐯 SO excited and thankful for this opportunity #GeouxTigers🏐

“They’ve all been really supportive and helped me through the entire process,” Schaben said.

There will be some significant differences between beach and indoor volleyball that Schaben will have to adjust to when she does transfer.

Aside from being played outdoors and in sand, beach volleyball is played with only two players, as opposed to six.  Additionally, Schaben says beach volleyball prevents players from pounding the ball like they’d be able to in indoor. This makes the training for beach volleyball considerably different.

It should come as no surprise, then, that the NCAA recognizes indoor volleyball and beach volleyball as completely different sports, meaning Schaben is allowed to transfer to another school with eligibility and without having to sit out.

With that in mind, beach volleyball has become an appealing option to those, like Schaben, who want to continue playing the sport after their eligibility expires. As a result, Schaben’s not the only Cyclone who’ll be transferring after the 2018 season.

Fellow senior Grace Lazard said she too wants to continue playing following her final season at Iowa State. Though she hasn’t yet decided on a school, Lazard hopes the extra time spent at the collegiate level can eventually lead to something bigger.

“I have aspirations to go to the Olympics,” Lazard said. “I’m still talking to some coaches and I’ll probably figure something out before summer. [Schaben and I] are pretty much in the same boat, she just committed before I did.”

All of this is made possible due to the growth of beach volleyball as a whole in recent years. Cyclones head coach Christy Johnson-Lynch mentioned the opportunities to play beach volleyball, even at a club level, were limited as little as 10 years ago, and Johnson-Lynch adds she’s excited at how the sport’s popularity has taken off.

Even Johnson-Lynch’s alma mater, Nebraska, has a beach volleyball team. Although the team isn’t nearly at the level of the Huskers’ indoor team, which won the national championship last season, the fact that the team exists in a cold-weather environment is a testament to the sport’s growing popularity.

Additionally, the Huskers and other teams with a beach program (especially those in colder climates) have the ability to use their beach teams as a recruiting tool, which adds further intrigue to the possibility of Iowa State one day adding a team itself.

“We’ve definitely done our homework on it to see what it would take,” Johnson-Lynch said. “There are challenges, of course, to having beach volleyball at Iowa State, but I have a folder sitting on my desk. It’s gathering dust a little bit, but it’s there in case we’re ever in position to brush it off.”

The way Johnson-Lynch sees it, according to her, is that any opportunity for people to play or keep playing volleyball is beneficial for the sport as a whole.

With that being said, Johnson-Lynch also adds that she had very little say in either Schaben or Lazard’s decision to continue playing volleyball, and that everything to this point has been their doing.

To that, the two seniors could be setting a path for fellow Cyclones to potentially follow in the future. Any player looking to do so would have the support of their head coach, and Schaben says she hopes her current teammates keep the idea of playing beach volleyball in the back of their minds because of her.

“It’s a sport that’s for sure up and coming,” Schaben said. “For girls that aren’t ready to be done playing yet, it’s a great opportunity to do that.”