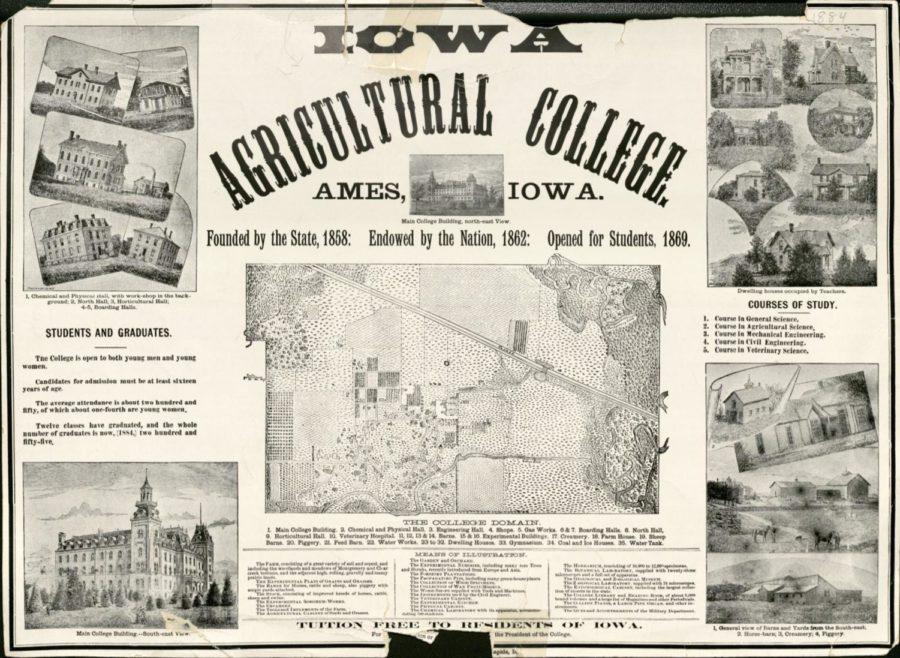 The student recruitment poster was used in 1884 and shows an early development of the campus grounds.

Editor’s note: “Ask Adonijah” is a contributed piece from the Iowa State University Library Special Collections and University Archives. The piece is named after Adonijah Welch, who was Iowa State’s first president, and seeks to answer community members’ questions about the history of Iowa State. Have a question? Let us know by emailing [email protected]

This month I would like to take a brief interlude from answering questions from you loyal readers and reflect on the important events that transpired in this state some 160 years ago.

On March 22, 1858, exactly 160 years ago today, the governor of Iowa, Ralph P. Lowe, signed the bill establishing the Iowa State Agricultural College and Model Farm. It was a hard-fought victory for those in the state who felt Iowa should have a people’s college dedicated to improving the lives of farmers and members of the working classes.

The passage of the legislation was just the first step in establishing the school. The path to becoming a functioning educational institution was a decade-long journey. A year after the legislation was passed, the Board of Trustees for the college selected Story County as the location for the new school and the original 648 acres of land, which once belonged to the native peoples of this region,was purchased. Work was started on establishing the farm and making improvements to the land. Things seemed to be advancing nicely for the little school until the Civil War interrupted its progress.

The first campus building, the Farm House, was completed in 1861 and the following year, Iowa became the first state to accept the terms of the Federal Land Grant College Act, sometimes referred to as the Morrill Act. This grant of 210,000 acres of federal land to the state was, fortunately for this campus, used to support the fledgling agricultural college and not the state university in Iowa City.

As the war came to a close, money from the state was allocated for an actual school building, and, after some false starts in its construction, the Main Building opened its doors in the fall of 1868. This was the same year I was hired as the first president of the new school. I find it hard to believe that it has been 150 years since I received that letter from the board inquiring about my services!

On March 17, 1869, over a decade after the passage of the legislation establishing the school, the Iowa State Agricultural College opened its doors to the school’s first freshman class. Composed of 136 men and 37 women, these bright young students hailed exclusively from the state of Iowa. They came mostly from farms and small towns and, for many of them, the Main Building was by far the largest and grandest building they had ever seen. The first class was also exclusively white, as it would be another 22 years before the first student of color would enroll at Iowa State.

Tuition was free, but that did not mean students had a lot of money or free time to spend on frivolous activities. Each student was required to work at the school, either out in the fields or in the kitchens, and they had to follow strict guidelines regarding social interactions. The wages they received for their labors only partially covered the cost of their books and meals, and, between their studies and work, there was little time to socialize, especially when compared to today.

Iowa State’s first graduating class, consisting of 24 men and two women, received their diplomas on November 13, 1872. During the commencement exercises, 20 of the graduates presented a speech to the rest of the attendees, including the faculty, fellow students, members of the Board of Trustees and even the governor. It was a thrilling experience.

My colleagues and I strived to establish a solid foundation that succeeding faculty and staff could build upon. As during my era, there will continue to be challenges and successes ahead, but as long as this school has strong leaders and the support of the legislature, dedicated faculty and staff, and passionate students and alumni, the Iowa State community will be able to celebrate these milestones for many years to come.