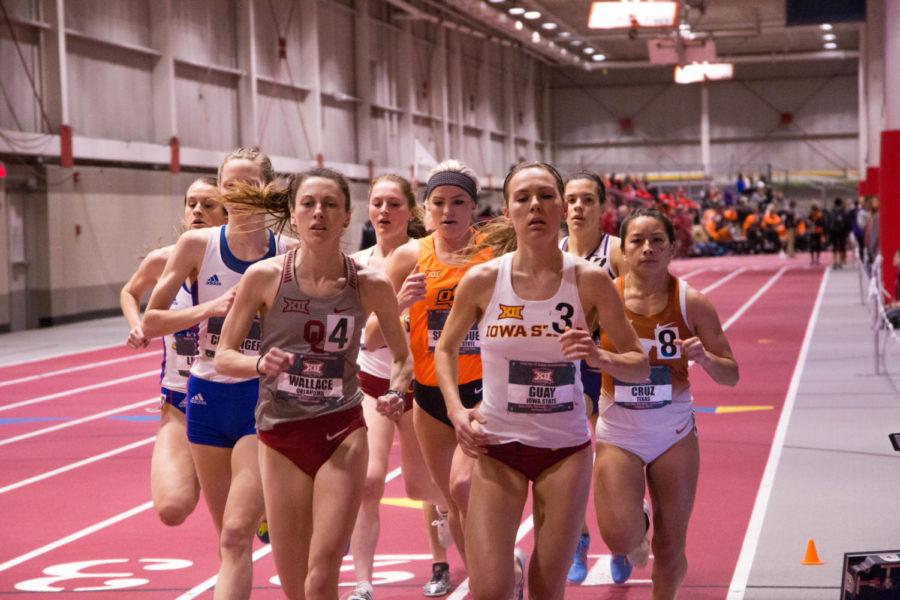 Senior Evelyne Guay runs in the Women's Mile Finals during the Big 12 Track and Field Championship at Lied Rec Center on Feb. 24. Guy finished in fourth place with a time of 4:56.71.

Schedule-wise, it seems as if the Iowa State women’s track and field team has had a lot of time off recently.

That doesn’t mean they’ve been taking a break.

Sure, the team had two weeks off from competition following the Big 12 Indoor Championships in February and had the week off last week after the Tulsa Duels, but assistant coach Andrea Grove-McDonough said the team has spent the time away putting in long hours of work to prepare for the outdoor season.

“They don’t really get any time off, to be honest with you,” Grove-McDonough said. “The girls who didn’t go to the NCAA [Indoor Championships] had a few days off, and that’s all we get. That’s the challenge of our sport: we have all three seasons and each one kind of bleeds into the next.”

One of those athletes who went to the Indoor Championships and had even less recovery time is junior distance runner Jasmine Staebler, who only got one day off after she qualified for and competed in the NCAA Indoor Championships in the 800-meter run on the weekend of March 9-10.

The Indoor Championships ended as a bittersweet affair for Staebler, as she felt happy with her performance as whole.

Unfortunately, the results didn’t reflect this satisfaction. During the race, Staebler was perhaps impeded by a fellow runner when she was stepped on from behind and fell, which led to a protest by Grove-McDonough and the coaching staff.

It was the first time Grove-McDonough had ever filed a protest, and it ultimately was denied by the NCAA due to lack of indisputable evidence.

This meant the result stood, and Staebler would finish as a second-team All-American at the event with a time of 2:05:02 instead of advancing to the final.

“It was kind of frustrating because I know that I could’ve made it,” Staebler said. “But at the end of the day, I don’t think there’s anything that I really could’ve done differently. I know my fitness was there and I think on a different day, I definitely could’ve been in that final.”

Staebler will have the chance to move on from the incident this weekend when she and the distance runners head to Palo Alto, California, for the Stanford Invitational. On the other side of the country, the rest of the Cyclones will head to Gainesville, Florida, for the Florida Relays.

In both cases, Grove-McDonough said the entire team is prepared for the outdoor season and ready to get away from the unseasonable weather in the midwest, despite the issues the time-zone changes may cause.

“I think we’re just excited to get into to some warm weather,” Grove-McDonough said. “It’s a really fun trip for our program.”

In Florida, the Cyclones will look for more strong performances from a variety of sources.

In addition to what they’ve come to expect from athletes like senior Jhoanmy Luque, who earned her fifth first-team All-American distinction with a fourth place finish in the triple jump at the NCAA Indoor Championships, several Cyclones will look to build off their success at the Tulsa Duels.

This group includes athletes like Essence Henderson, Keiara Williams and Tessa Krempel, who all took first place in the discus, shot put and hammer throw respectively.

It was Henderson’s first time competing for Iowa State in the discus, a fact which makes a 162-2 throw, a top-five mark in ISU history, all the more impressive.

In California, the distance runners will be looking to build off of their own impressive performances in Tulsa, Oklahoma. The 1500-meter run, or “metric mile,” was a particular strength of the Cyclones, as Iowa State had three runners place in the top ten, including the first and second place finishers in Megan Schott and Abby Caldwell.

While Staebler stayed back to recover from the Indoor Championships instead of going to Tulsa, she said she’s much more prepared this year to take on the different challenges of the outdoor season than last year.

Specifically, Staebler said she feels stronger and has more of a base to build off of now making the transition from indoor.

Additionally, Staebler said she’s motivated by the success of her teammates throughout the season thus far and when a team member puts forth their best effort, the rest of the team tends to follow along.

“Our team has had a really good vibe this year,” Staebler said. “When one person races well, that kind of inspires the rest of us and then we just kind of build off of each other’s momentum.”