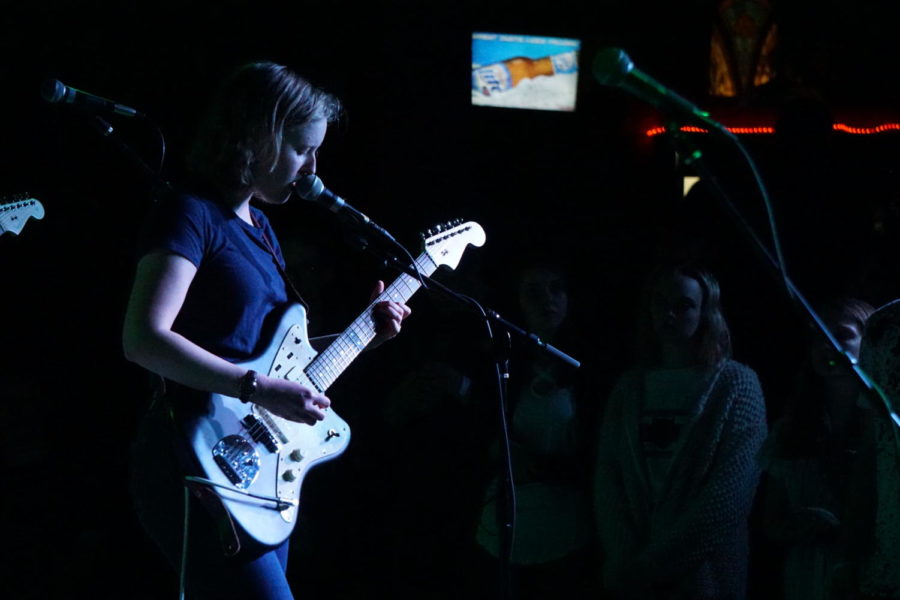 Lead singer and songwriter Kerry Alexander performed at the M-shop on March 8 with Bad Bad Hats. She sang "Fight Song", "Joseph", "Super America", and a few other fan-favorites to the audience that congregated to hear them perform.

While it remained bitter cold outside the walls of the Memorial Union, it was nothing but warm vibes at the M-Shop Thursday evening with Bad Bad Hats and Halfloves.

M-Shop veterans Halfloves opened the gig with their usual blend of guitars and rich, vibrant synths. Not feeling super talkative, the group busted through a tight set of tracks both old and new.

The band busted through four new tracks, presumably testing the waters for when they record the tracks for the sophomore LP, which they’re recording in the near future.

When not testing out new material, Halfloves leaned on singles and fan-favorites. “Not Too Keen” made an early appearance, and “It’s Easy to Leave” made a solid mid-set track.

“Novocain” came as the final track, featuring heavy synths and a dreamy outro which transitioned well into the headliner’s slacker vibes.

While Thursday night acted as Bad Bad Hats’ M-Shop debut, they are hardly strangers to central Iowa. They performed at both 80/35 2017 and the inaugural rendition of Street Heat in August, both in Des Moines and made their Ames debut at DG’s Taphouse in August of 2016.

“This is our second time in Ames, Iowa. And you know what they say: ‘First time, great; second time, great,'” said frontwoman Kerry Alexander.

The band cranked out a few tracks from their 2015 debut LP “Psychic Reader” right off the bat. “Say Nothing” opened the show, while “Fight Song” and “Joseph” were met with joyous yells from the audience. The band even found time to throw a few new tracks in the mix.

“This one is for all the Joseph’s out there,” Alexander said before kicking off “Joseph.”

Alexander, and the rest of the band for that matter, possessed an addictive slacker-like stage presence which made every movement exceptionally charming.

“I write a lot of songs about being on the outside of a relationship … but, truthfully, I’ve been in a relationship for quite a long time and I wanted to write a song about the challenges of a long term relationship,” Alexander said before “Psychic Reader.”

While much of the set focused on the group’s debut LP and upcoming new material, they still found the time to squeeze in a couple tracks from their debut EP, including “Super America.”

“This one is about a gas station in Minnesota … Super America was a place I used to go to in college when I was in need of a beverage or a snack, respectively,” Alexander preluded. “Super America provided the snacks and I provided the sorrows.”

The end of the set included more highlights from “Psychic Reader,” like “Shame,” “Cruella” and “Midway.”

“This next song is about sleeping with your cell phone under your pillow,” Alexander said before “All-Nighter.” She then eluded to a text message she received from someone which expressed great admiration for her. “That’s a kind of text you should respond to quickly.”

She jokingly responded with a “sounds good.”

The group closed the evening with “It Hurts,” which featured an extended outro, which gave a sense of finality to an otherwise short bop.

Bad Bad Hats satisfied fans and non-fans alike Thursday night at the M-Shop. And by the length of the line at the merchandise table after the show, it seems as though they gained themselves many more fans.