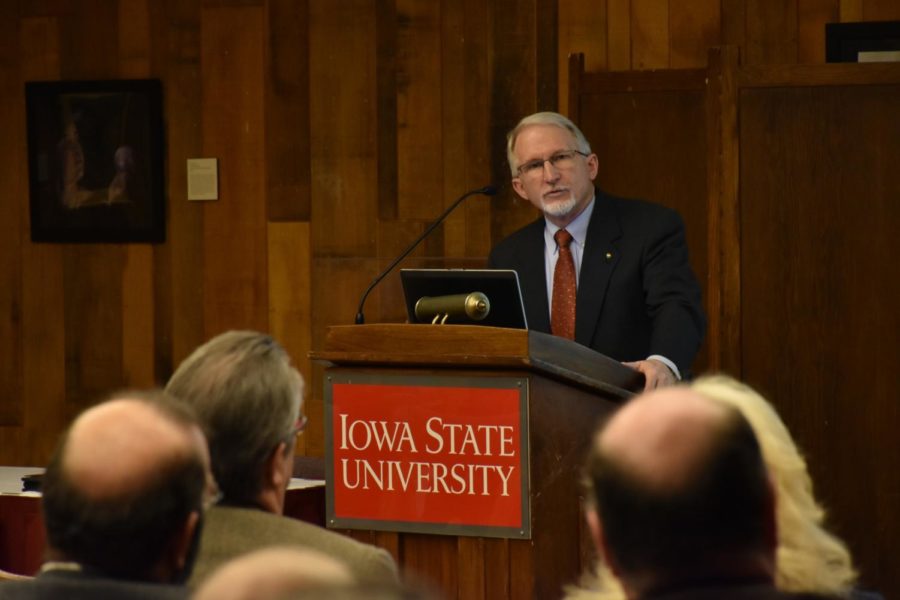 Interim Vice President for ISU Extension and Outreach John Lawrence spoke at an open forum on Feb. 28, 2018 for his shot at the full time position.

The second finalist for the vice president of Extension and Outreach, John Lawrence, held an open forum 3 p.m. on Wednesday.

He is currently the interim vice president of Extension and Outreach. He received his bachelor’s degree in animal science and his master’s degree in economics at Iowa State. He has been involved with Iowa State professionally since 1991.

Lawrence discussed the importance of people needing “a way on and a way up” supporting employees who want to continue their education while working with Iowa State.

Hiring people who want to move up is in the employee’s best interest as well as the university’s. Lawrence expressed how he’d like to put more resources to make it possible for workers to have time to take classes.

He encourages these workers to branch out and increase their skills in other areas as well.

If people working for the university are in mid-career path and decide they want to make a switch, Lawrence wants to make sure the university can work with them to make it possible for them to take classes. Iowa State values what people bring to the table.

Lawrence also spoke about campus to county development and how it’d be beneficial to open up a conversation of common goals to work on. It’s time to re-evaluate and move forward from past mistakes.

“One team, one extension system that we’re all apart of,” Lawrence said.

He wants Iowa State and the counties surrounding to think of themselves as one group trying to achieve common goals. He’d like to open a discussion about shared positions between campus and counties.

He takes pride in Iowa State’s extension program and their leadership.

“When you need to get people around a table to tackle a problem, few organizations can get their people to the table as well as we can,” Lawrence said.

He said taking pride in Iowa State’s programs is what makes them work so well together.

He wants to increase the respect the extension receives by improving communication, reporting the impact and the extension program telling their stories.