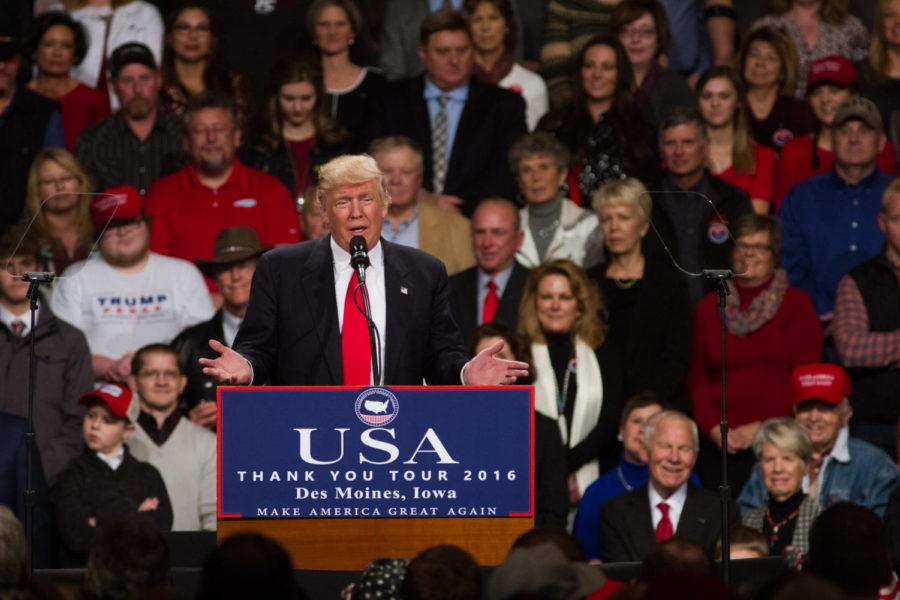 President Elect Donald Trump speaks during a rally as part of his USA Thank You Tour, in Des Moines during the evening of Dec. 8. Trump spoke about the general election, how he would repeal Obamacare, bring jobs back to the US, and reform care for veterans.

The opioid crisis continues to cripple America as more than 115 people are dying by overdosing on opioids every day. The misuse of painkillers has ballooned in America and is quickly taking hundreds of lives.

In October 2017, President Trump declared the opioid crisis a public health emergency and has recently released a plan to handle the opioid crisis. Trump’s plan calls for expanded addiction treatment, an ad campaign to discourage drug use and a tougher approach to law enforcement, even going as far to say that the death penalty must be used to end the opioid crisis.

The death penalty is too extreme of a punishment for drugs, while also being a punishment that has a shaky moral groundwork. But besides that wild claim, it is good to see some action being taken on the national level. We will have to wait and see if it actually leads to any real results.

But this isn’t just a national issue, it is also one that is prevalent in Iowa.

Somehow, 90 pills per person is a step up, which shows how extreme this crisis has become.

According to the Iowa Department of Public Health, there were at least 195 opioid-related deaths in Iowa in 2017. That number is expected to increase as more death certificates come in from 2017.

People are abusing painkillers and dying as a result, so what are we doing to combat this?

The Iowa House recently passed House File 2377, a bipartisan bill that would help save lives and reduce the impact of the opioid crisis. This bill would implement Good Samaritan laws for those seeking medical assistance for a drug-related overdose, require physicians to file every prescription electronically to avoid forgeries and most importantly, place a limit on opioid prescriptions.

This bill, if passed, would be a strong first step to ending the opioid crisis in Iowa. But it is important that this problem isn’t going away and that is why we need to do more.

We need more legislation like House File 2377 on federal and state levels. We need to encourage our leaders to continue the fight to end the opioid crisis.